Whatever your desires are on safari, you’ll satisfy them in Botswana.

Photography has been a passion of mine since before I can remember. Patience has been an asset of Cherrie’s since she met me – they go well together! I love capturing quality images; I’m lucky enough to be able to sell some of them commercially but above all they capture moments in time for me that would otherwise be lost in the recesses of my memory. Images are enduring memories that can take me back to the second I pressed the shutter; recapturing events, actions, people, as if I was there again with them now. Cherrie loves watching wildlife, identifying birds and sitting endlessly while I frame the perfect shot – well, I made the last bit up. Hours and hours of waiting to capture an Indian Roller (Blue Jay) flashing its stunning plumage in flight across the jungles of India became deja-vu for her as I tried the same in Africa – she has unbelievable resilience that I can only wonder at – perhaps opposites really do attract! 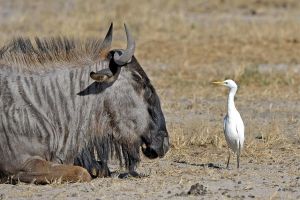 Having spent many years in India working in conservation, it had always been an unfulfilled desire to see and learn about African wildlife; to experience safari on the plains, to stay in the Bush, to understand more of African culture and history. An immense amount of research in terms of migration seasons, climatic conditions, animal movements, environments and places where tourists outnumber the Wildebeest herds led us to plump for Botswana. It’s acknowledged as exclusive and designed by the Botswana government to be more upscale in terms of standard of camps and prices, which tends to thin the numbers of people willing to visit and controls the impact that tourism has on wildlife.

The Okavango Delta in Botswana is renowned for being a shifting haven for the Big Five and a multitude of other wildlife that rely on the annual rains and the flooding of the Delta for food and prey. We settled on June as the month to travel as sufficient water would be present without it being impossible to navigate the area but with plenty of wildlife in residence under clear blue skies.

I spent an age deciding what camera equipment I’d take and invested heavily in a beautiful 200-400mm f4 Nikon zoom and an extra Nikon camera body that together could have paid for another person and probably weighed as much. We tried to leave no stone unturned in preparing for the trip so that we’d get maximum benefit from it. As most of the areas in Botswana seem to claim presence of the same animals I asked an old ‘expert’ to recommend which places to go to find which animals, in order to cover the best spectrum of wildlife.

‘What’s your wish-list.’ he asked. Everything has the same value for us, but ideally we wanted to see as much as possible in the three weeks we had. ‘But give me an order of choice.’ He persisted. 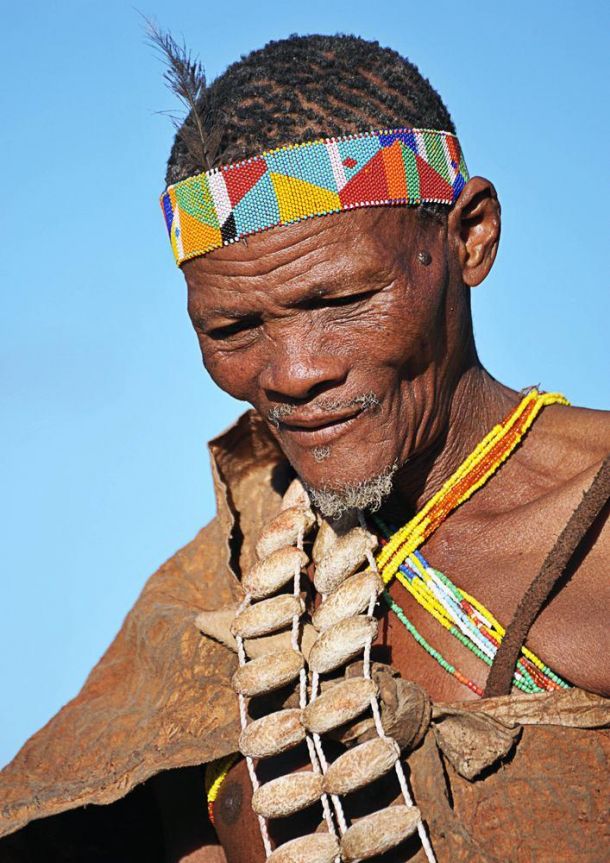 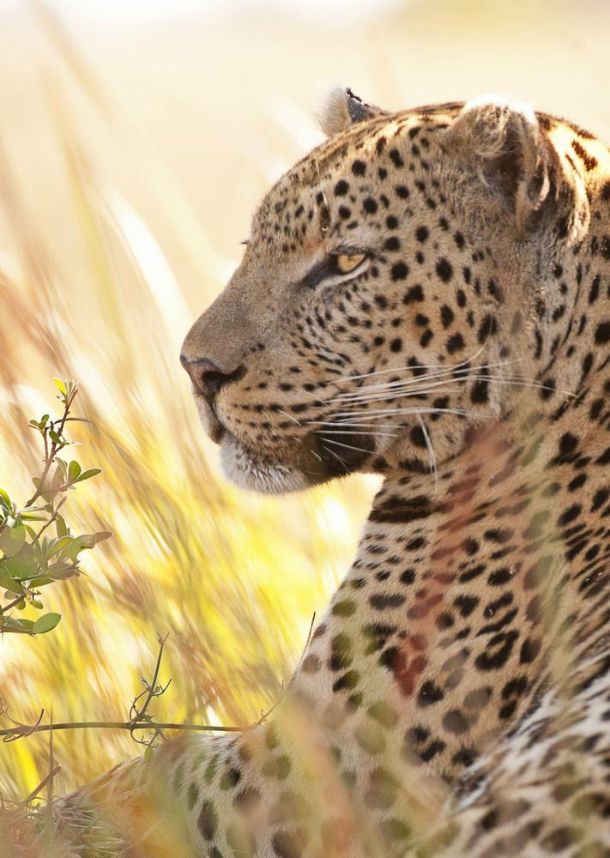 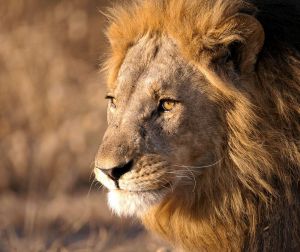 Well, if I really had to choose: I elected to put Cheetah at the top of the list. Our expert prepared our itinerary with this in mind. Cheetah was the one animal we were to see no sign of during the whole trip!

Cherrie: Although we could have driven ourselves between camps, this would have used up precious days that we’d prefer to spend with the wildlife, so finally decided to work with a good ground agent and fly with Bush pilots in light aircraft between each of our chosen locations to maximise time on the ground. 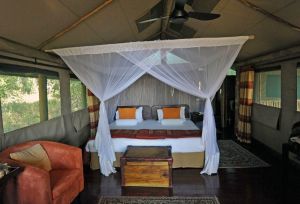 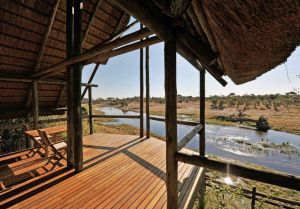 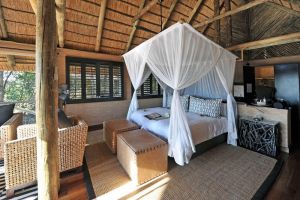 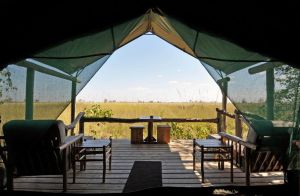 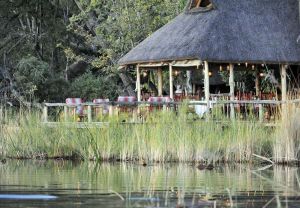 Our final itinerary was to cover Meno A Kwena Tented Camp in the Makadikadi Pans on the edge of the Okavango, Camp Xakanaxa in Moremi Reserve, Savute Safari Lodge near Chobe National Park and Shinde camp in the Okavango before heading up to Zambezi National Park and a short break at Victoria Falls to recuperate; after fitting in a helicopter trip over the Falls. It was a packed schedule, two or three nights in each place and including mokoro (dugout canoes), boats and game drives to cover all bases. I’d put in a special request for photography specific guides and vehicles where possible but as with all best laid schemes this message never got through and it was left to local negotiation at each camp. To be fair they all did their level best to make it happen and I couldn’t fault one of them – just the person who should have arranged it at the outset!

We went from quite rudimentary but charming tents with outside open air facilities to plush purpose built chalets that overlooked rivers or waterholes; food and the choice and diversity of food was unbelievably good and couldn’t be faulted in any camp. The naturalists and the principals of each camp couldn’t do enough and we have nothing but praise for their hospitality and courtesy. We were often fortunate to have a vehicle to ourselves or to four of us; travelled with and met fascinating people from all walks of life and from many countries; stayed in the most magical of places in landscapes that were teeming with game and saw virtually every animal we’d hoped for in situations beyond our wildest expectations – Botswana was wonderful.

Cherrie: The ability to hop on a plane between camps made life so much easier and added a perspective that we would have missed by road. The little ‘scheduled’ Safari Air Cessnas seemed to adjust their itineraries around who was where and where they needed to go – so that too was seamless. 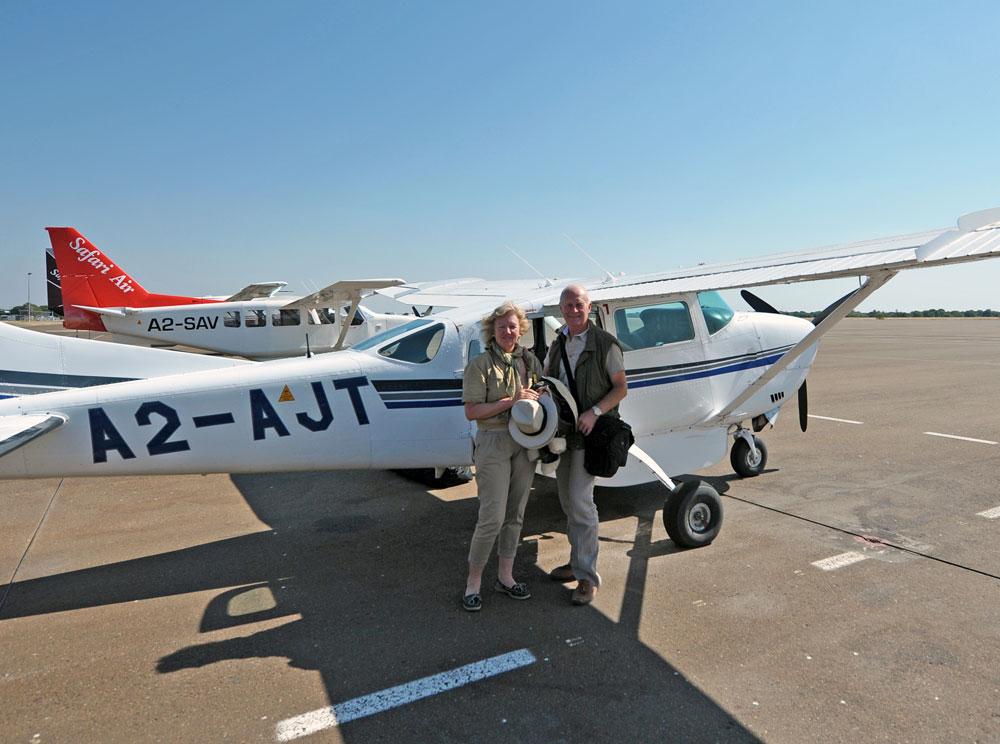 We saw lions hunting and on recent kills, elephants bathing and crossing the plains line astern; Zebra cantering through water pools; Leopards in branches above us on their kill and resting on termite mounds in the afternoon sun; birdlife beyond count and Hyena pups awaiting the return of their pack; Jackals snoozing, vultures squabbling, deer and antelope cavorting or scampering away; Crocodiles being sinister and Hippos wallowing as families in supposed bliss. The whole trip was one of fulfilment – even down to the travelling and the bushmen’s jungle craft; the night skies and the sounds of wild animals prowling through camp – it just couldn’t have been better – except that Cheetah! 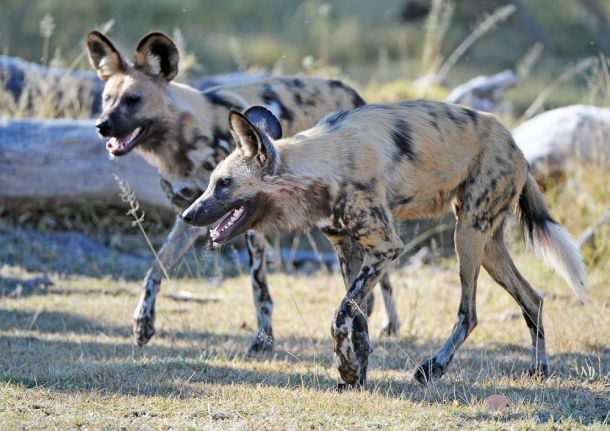 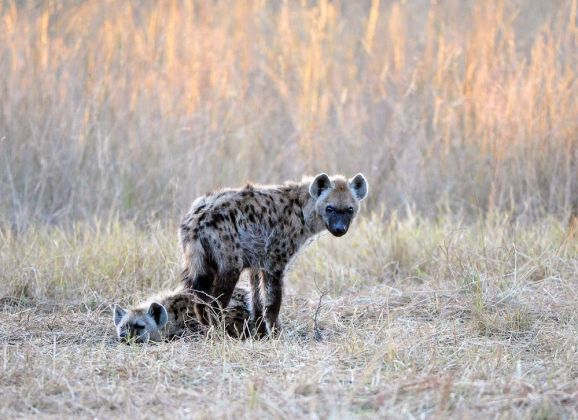 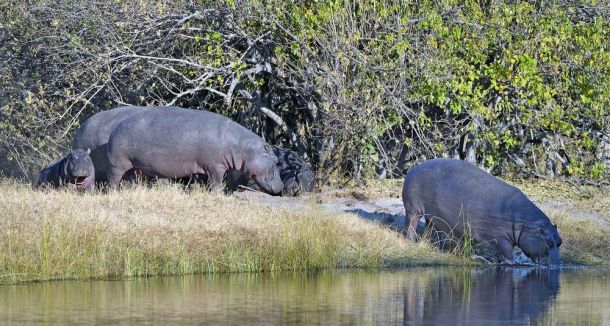 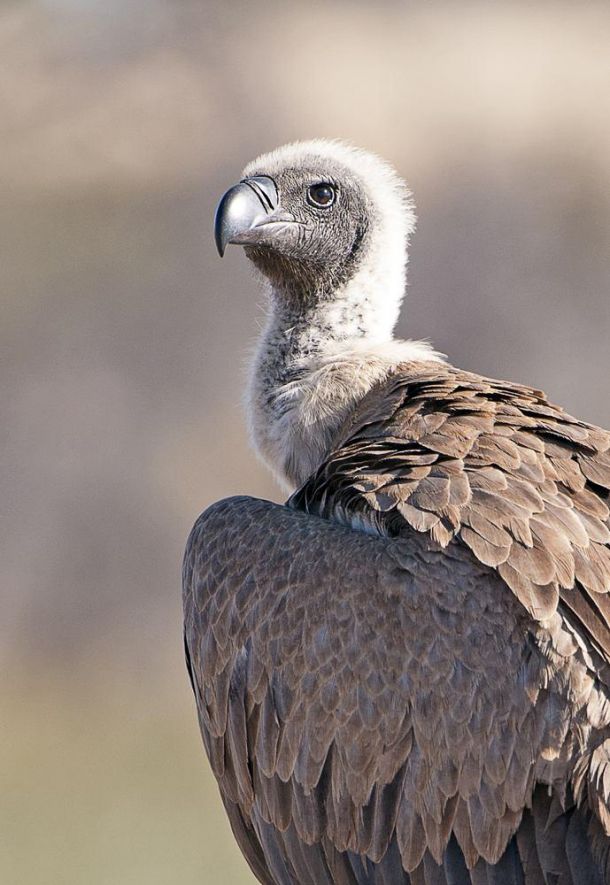 Cherrie: They always say, ‘leave something to come back for’ and I suppose we did, but unlike the Galapagos which was fulfilling for a single visit and didn’t encourage us to return, Africa has inspired us and will draw us back time and again.

We did top off our trip to Botswana with a brief stay in Victoria Falls at the Safari Club just outside the town. Our lovely rooms in a little private annex adjacent to the main hotel meant that we had a secluded area within which to breakfast and snack at teatime before joining the main restaurant where the food and staff were delightful.

We took advantage of some spare time, firstly to walk along the length of the falls (the Zimbabwe side is better than the Zambian one) and then to take a helicopter ride above the falls, which was simply stunning. Collected from the hotel by private vehicle we were deposited at the ‘airport’ and given a pre-flight briefing; after which Geoff talked his way into the front seat on the basis that he’s flown helicopters and wanted to take pictures! The joke was that the only opening window adjacent to him was about six inches square, whilst the opening one next to me was four times the size. It was fun watching him struggle to get his lens out of his little porthole but overall wherever you sit in the Jet Ranger gives you a very good vantage point to see the massive wall of water and the glinting Zambezi River.

We flew to Maun via Johannesburg in order to start our safari.

Full flight options can be seen at

For visa and travel information see:

We were informed that we needed Yellow Fever jabs even though we weren’t coming from a yellow fever infected country. The vaccine is not always in ready supply in UK and might have to be specially ordered. It can have worrying side effects for certain people and certain ages, so make sure you check with your nurse in order to make an informed choice. Having been through all of this palaver, no one bothered to check our vaccination certificates at all at port of entry or departure – but obviously you can’t always rely on that!