The Road to Mandalay – best by boat?

Home » Asia » The Road to Mandalay – best by boat?

For all its political turmoil, Myanmar remains a tranquil destination of gentle people and Buddhist harmony – somewhat at odds with its rough and potholed roads!

A  trip down the Irrawaddy by our guest writer Helen Tippins

If you’ve an aversion to visiting countries with questionable human rights records then Myanmar isn’t for you but if your quest is to visit places before they become swamped by mainstream tourism then now is the time to go. 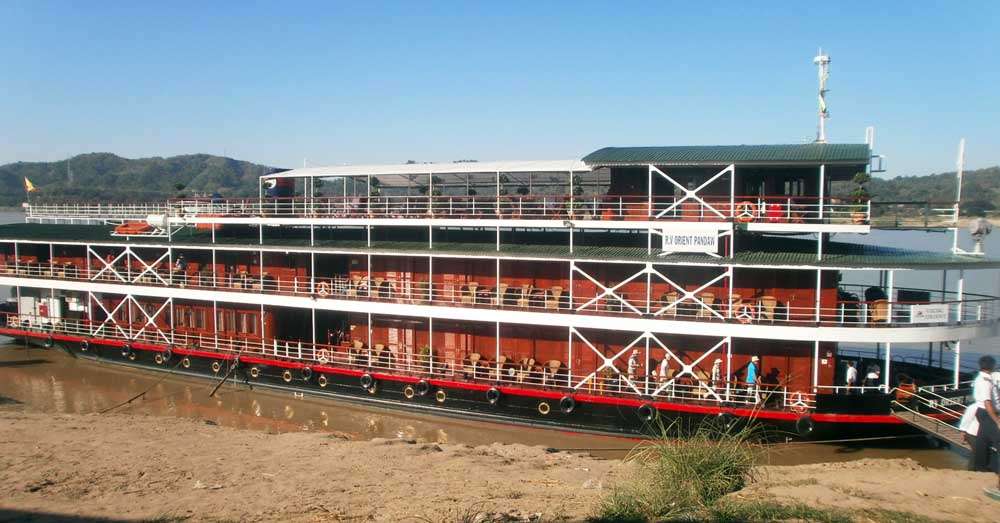 Our boat was one of the local Pandaws that European travel companies have been obliged to use and as such it lacked some of the refinement that you might associate with European river cruising. Nevertheless the staff on board couldn’t have been more accommodating and the accommodation itself was really comfortable.
Our Pandaw feels amazingly colonial with bamboo chairs on the deck, teakwood lined cabins and lovely smiling staff who clean our shoes when we arrive back after every trip, mix great cocktails and bang a gong for meal times.

Jimmy, in charge of omelettes every morning, always enjoys a joke – albeit with the help of sign language from both of us. Some of the food is spicy – a cross between Chinese and Thai food with a great selection of salads including tea leaf salad, which we are told is a speciality but there is food to suit all tastes. 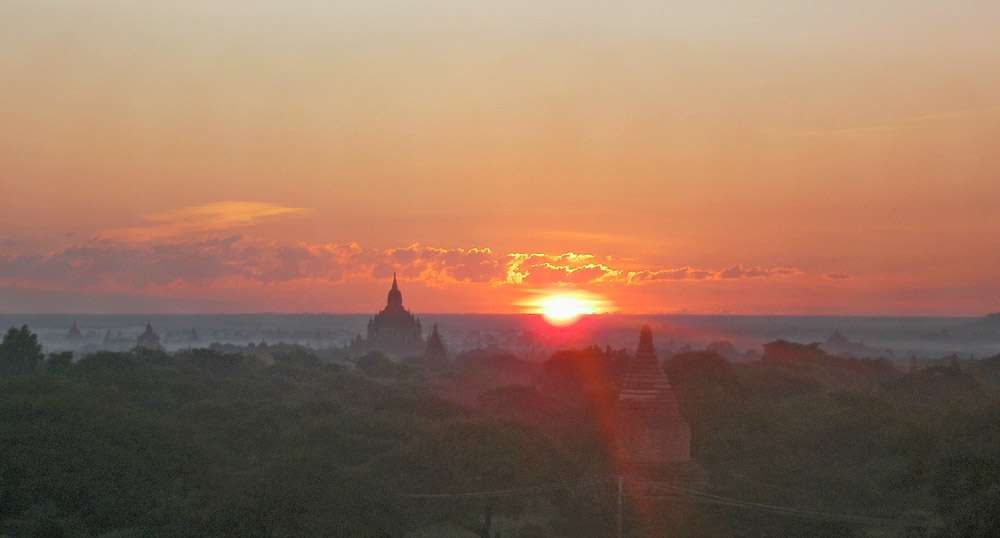 The huge numbers of Buddhist pagodas along the river bank are testament to the prevalence of the faith and thankfully the ‘Nats’ – the house spirits they invoke – are more plentiful than gnats as we ply our route downstream. We are truly isolated from the outside world on board as there are no ‘luxuries’ such as efficient Wi-Fi, broadband or even ATMs. Once the initial panic has subsided it is a real rest from being at the mercy of personal technology and encourages meditation and focus on life around us. 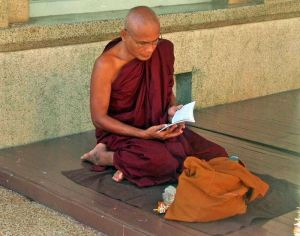 The tranquility along the river banks is hardly surprising given that every Burmese is expected to spend at least two sessions as a monk, shaving their heads and wearing orange robes. Nuns similarly shave their heads and wear pink robes. At one point along the river, having transferred to a small boat to access a narrow part of the river, a group of monks request a lift with us. We are quietly warned not to touch their robes as they will then have to change them. Accordingly, Monks are revered throughout the country and local villagers give them food at 6 am. every morning, in the belief that it will buy them credit in the next world. 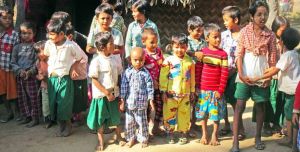 As we meander along the Irrawaddy, a generally quiet river with little traffic owing to shifting sands and changing water levels, we are surrounded by colour. Carts pulled by oxen and women carrying heavy baskets or pots on their heads. Men wearing sarong-like longhi, are strange to us at first but later remarkable for their use of particularly attractive and colourful materials. Women wear tanaka paste made from bark, which they spread on their faces, both to protect from the sun and as a cosmetic. Exotic fruits, some of which we’ve never seen before and pantomime festival elephants add to the kaleidoscope of colour and fun that prevails in Myanmar. 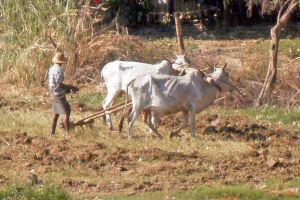 There’s no shortage of traditional industry and practices along the river that highlight how far we have left these behind at home. In Ohnnechaun Village an elderly man shins up a coconut tree, with no footholds, to harvest coconuts at the top, whilst dogs bark menacingly below. Children of all ages run around in groups, some with shaved heads but all with wonderful smiles. We visit Yandabo Village, famous for its pottery, where pots are spread everywhere and women carry heavy loads around on their heads. 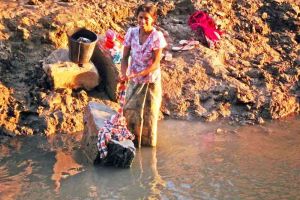 People laboriously dredge gravel from the river and put it into buckets which another line of women empty onto a pile, while others use spades to load lorries for onward transport. 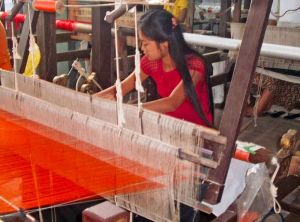 In Amarapura, near Mandalay, we hear the clacking of looms in cotton and silk workshops where most of the residents earn their living by specialising in making longhis and htameins for weddings. Gold leaf beating – very hard intensive work – produces beautiful filaments of shimmering metal, whilst others create beautiful silver jewellery set with colourful stones.

Whilst the scenery is beautiful throughout, with thickly wooded hills, jungle and unspoilt villages along the river, we are also fascinated by the architecture that charts the country’s history. 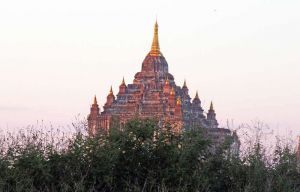 From Yangon (Rangoon) where our journey has started, we’ve been impressed by the huge gilded 95 metre high diamond encrusted shrine of the Shwedagon Pagoda, the most important Buddhist shrine in Burma. Surrounding the main stupa, its marble floors are covered with shrines, monks, nuns and now, tourists.

By contrast, the fading glory of old colonial buildings, once grand and imposing, now crumbling and forgotten for the most part, maps the passage of occupiers and adventurers alike. 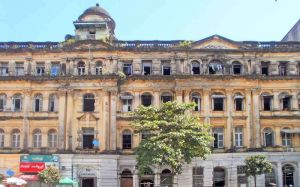 Some have been saved to become smart hotels but for the most part their condition reflects a desire to move on and retrieve the country’s own identity. 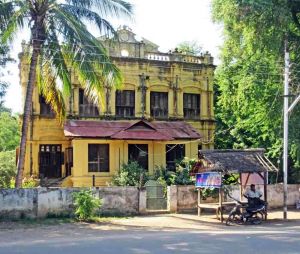 As if to contradict this desire, the Taukkyan War cemetery guards the graves of over six thousand Commonwealth servicemen; permanent home of those who lost their lives here in World War 2; together with memorials to thousands of others whose remains were neither identified nor reclaimed. 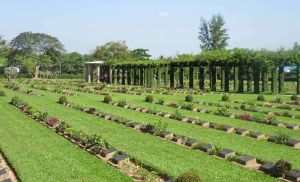 On past Sagaing, centre to Myanmar’s Buddhist faith with its six thousand devotees; bouncing on bullock cart and drifting by small boat to reach the leaning tower of Inwa on an island, all adds to our sense of wellbeing in this verdant country. 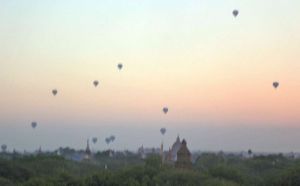 Bagan, by contrast, is spectacular. Elsewhere along the river, stupa can be seen but Bagan in the centre of Myanmar has over 2,000 temples and pagodas spread over a large plain. Originally there were more than 10,000, built by the wealthy rulers of the Bagan Empire. Hot air balloons float at dawn above the plain but we content ourselves by getting up in time to see the sunrise from the terraces of the spectacular Ananda Temple which dominates the skyline. 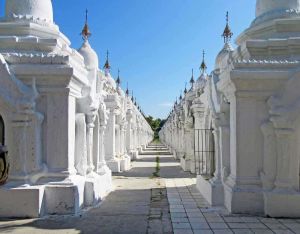 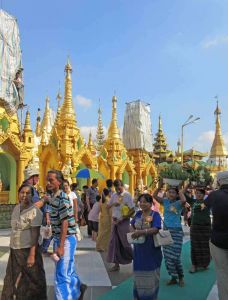 Not that you’re obliged to visit all of them but temple-overload is an ever-present danger and it’s well worth carrying wet-wipes as you’ll always enter shrines barefoot.

Near to the weaving village of Amarapura is the U Bein bridge, which spans Taungthaman Lake and is said to be the oldest and longest teakwood pedestrian bridge in the world, having been built in 1850. Here, at sunset, silhouettes of monks, people pushing their bikes and children grasped firmly by the hand cross the bridge creating a moving story that unfolds like a puppet show. 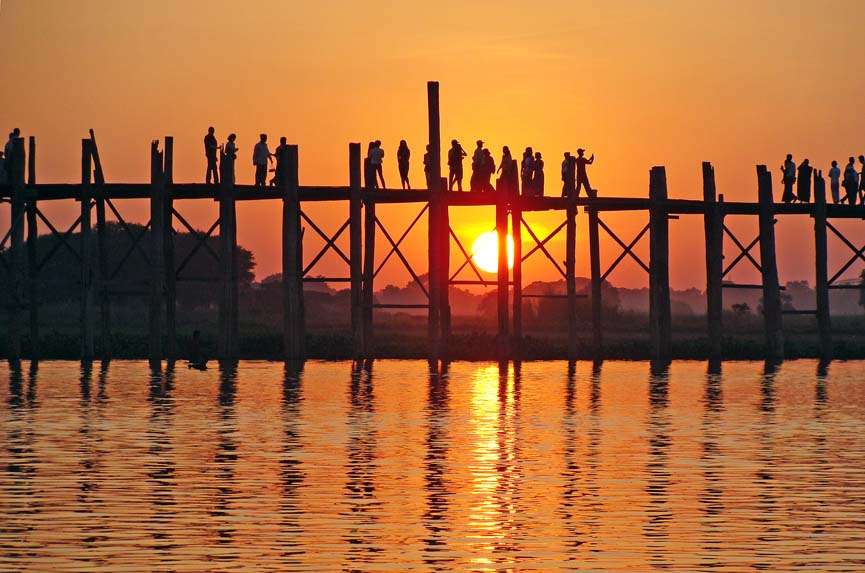 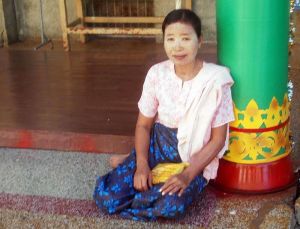 In fact, Myanmar itself continuously unrolls as a colourful and intriguing story before us, as we finally reach our destination of Mandalay. The city, which reputedly Kipling never reached although having penned ‘The Road to Mandalay’, offers its own set of unique sights and sites; such as the Royal Palace within a walled and moated citadel or the world’s largest book of stone tablets in Kuthodaw pagoda – but for us the true character of this country lies in its tranquillity, generosity of spirit and overwhelming welcome that its people extend to us as visitors.

Now is definitely the time to go, whilst Myanmar’s true colours and character prevails. 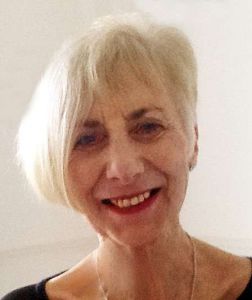 Helen, our guest writer for this article, has travelled extensively and often chooses her next port of call as a result of events or situations that prompt them.

Helen says, ‘After long, harassed flights, delays, inconvenience, bad weather, or bookings that go wrong, I still realise that a rut is not a good place to be and I get the urge to escape and experience different cultures, customs, scenery, people and ways of life. I want to get a new awareness, insight and memories to keep. I need the wow factor that comes with adventurous experiences. I love to try new food although I drew the line at fried spiders and maggots on sticks in Cambodia and roasted Guinea pigs in Lima! I enjoy exotic places, albeit from the luxury of a good hotel.

Burma first entered my consciousness when we met a Burmese waiter in Thailand. Not only did he have a lovely smile, but was always serene and calm. He explained the importance of spirituality to the Burmese. We decided to research the country and following Aung San Suu Kyi’s election, felt it more acceptable to go.’

If you’re tempted to write an article for The Luxury Couple about your own experiences then why not contact us here.

Why not let us arrange your own tailor-made travel to Myanmar and throughout Southeast Asia?