Simla, or Shimla as it’s now known, can’t fail to fascinate you. From the stunning backdrop of Himalayan snow-capped mountains, through the bustling bazaar and impossibly stacked dwellings that defy gravity along the steep hillsides, to the incongruous and authoritative stone-built edifices that proclaimed British rule, Simla will fascinate you.

Having spent so long in India and read so much about the Raj and its impact on this wonderful country over the centuries it was quite an eye-opener to see it portrayed so starkly in the ‘Indian Summers’ drama on Channel 4. Set in the summer of 1932, when India began to dream of Independence but Britain still clung determinedly to power – as a moment in time it realistically and colourfully charts all of the bigotry and self-serving elitist attitudes of the British without perhaps having first set out the immense backdrop of investment, law, technology, communication and even-handedness for which we are still revered amidst the older generations In India. You’d be forgiven for thinking as you watched the sweeping hills bedecked with tea estates, the elegantly exclusive ‘Club’ and the industrious Imperial Civil Service (ICS) that our presence in India was solely one of exploitation – and perhaps to some extent it was – but nevertheless under one thousand highly intelligent and diligent ‘Civilians’ administered a nation of over three hundred million; developing it from a collection of disparate, fragmented and often warring princely states into a coherent unified nation with a code of law, a structured railway system and fair-minded (for the most part) regional judiciary that often meant huge geographical tracts of land and people were overseen by men often no more than twenty years old. Surely cooperation, mutual trust and respect must have played a part with such odds? 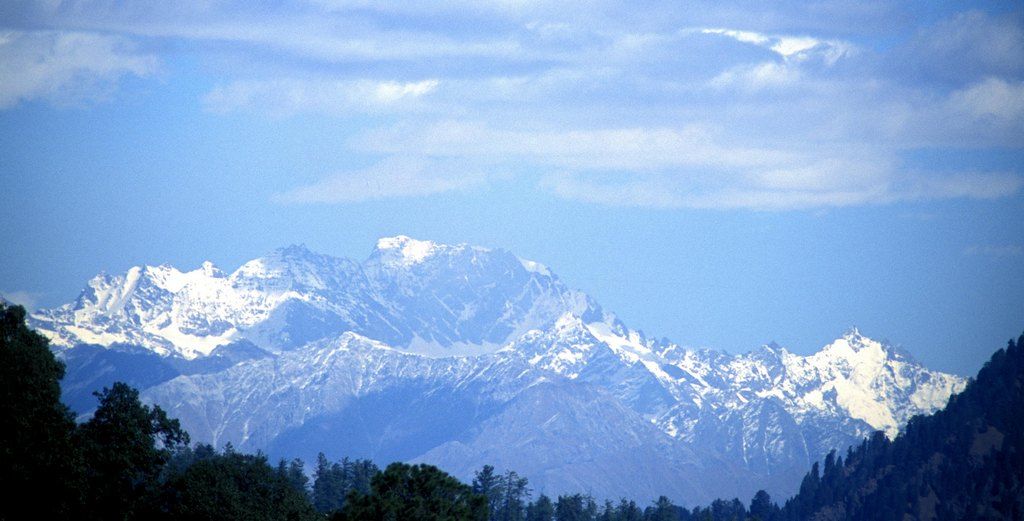 Nevertheless, this huge feat of overall rule, or ‘Raj’, is now regarded as nothing more than oppressive imposition by the younger generations of India who, in common with most countries (ourselves included) rewrite their history to suit and, for example, are now quite jingoistic about their ‘First War of Independence’ that we once called ‘The Mutiny’.

Cherrie: Whatever your view, nationality or persuasion however, you can’t fail to be enchanted by the seeming transposition of Southend-on-sea to the Himalayas when you visit Simla. 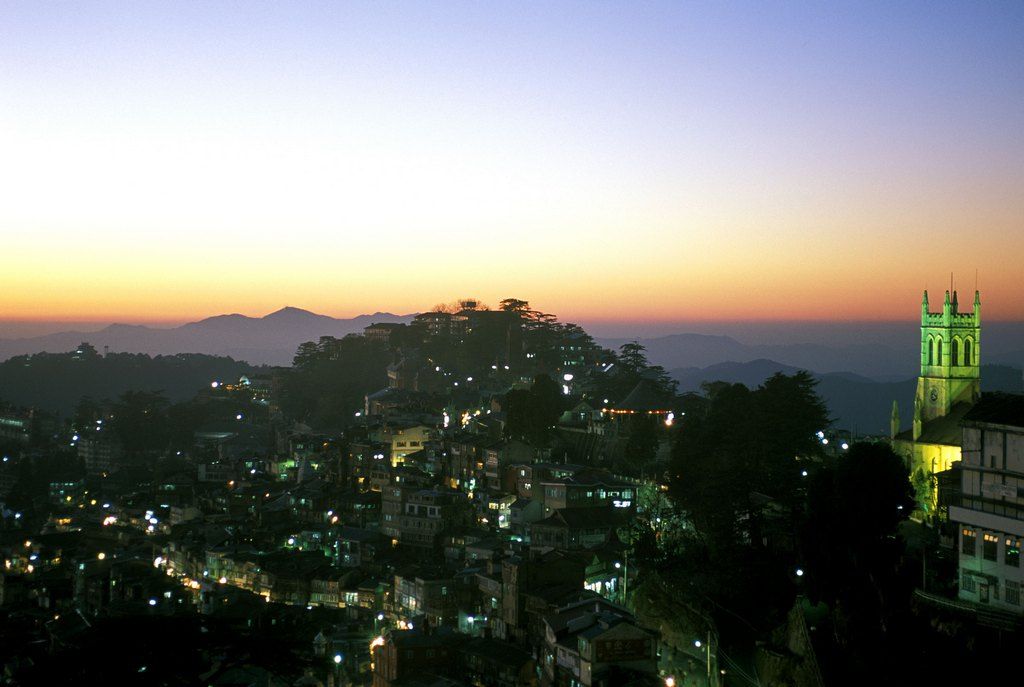 Cherrie and I and a great friend Andrea – who has always descended on us at every opportunity when we go exploring India – decided to journey to the ‘Summer Capital’, partly because it was in an area we hadn’t visited but also for the comparison with Pachmarhi, where we once lived, which was also the regional summer retreat for the Raj much further south in the Central Highlands of India.

For the last part of the journey we elected to catch the Kalka to Simla railway – an highly improbably built railway whose ‘toy train’ clambers up the sides of the Himalayan foothills through stunning scenery at a sedate pace with many stops for you to stretch your legs. Today’s modern traveller might regard this throwback to be an inconvenience at the end of what can be a tiring and arduous trip – but we think it’s worth it.

Perhaps because we’re used to discomfort as well as luxury, as well as being romantics, we relished the opportunity to let our imaginations take us back as the little train with its open windows, lack of air-conditioning and rudimentary seating snaked its way to the capital. Nearly a hundred years ago, the cream and the crowd would perhaps have ridden these same carriages, on the same rails, in the same heat or damp, gently perspiring or huddled together for warmth, to their summer in the hills. Little would they have known at that time that their tenure in India was limited and that their very existence was becoming more and more out of step with the changing political climate. The chance to recapture the essence of this hugely important period in our history was one not to be missed. It’s too easy to skip these little adventures that inevitably bring discomfort but whose alternatives so often immunise you from the reality and sense of history of the very country you’re visiting. 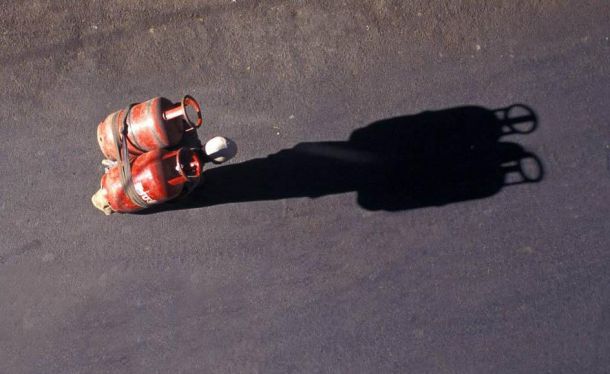 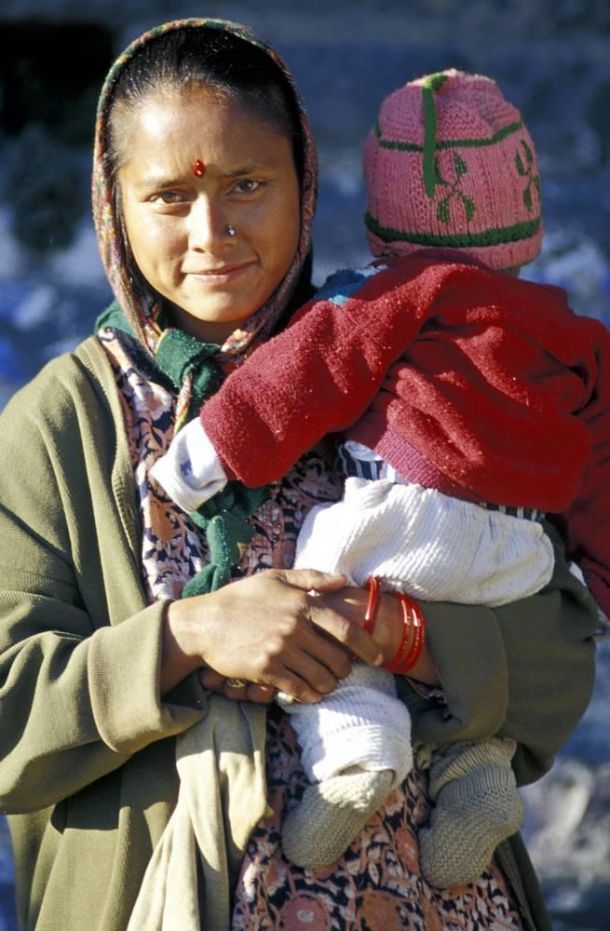 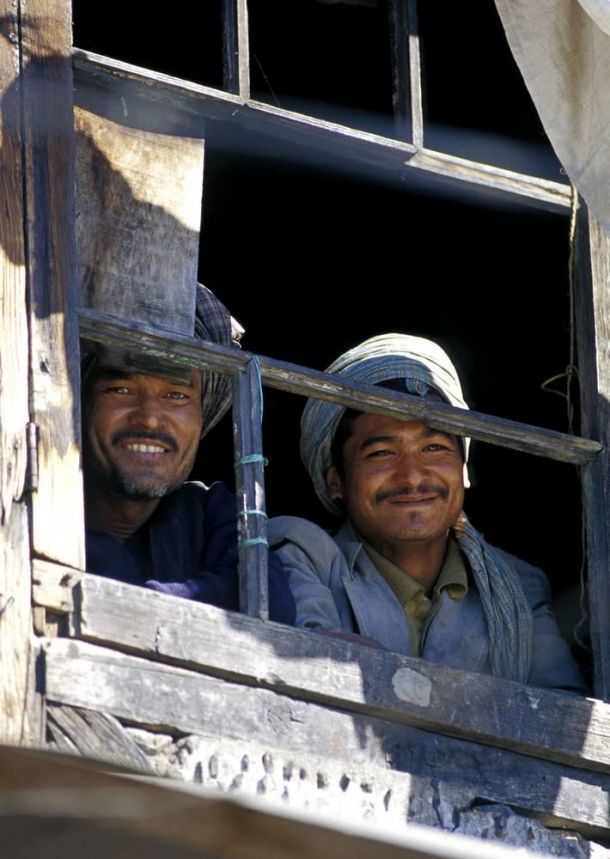 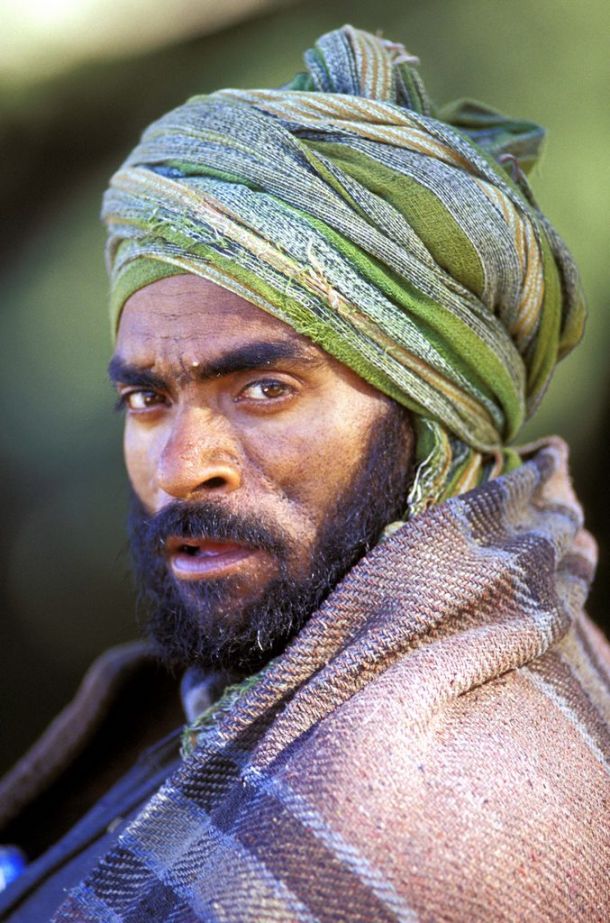 Cherrie: Do choose the right hand seats in the ‘toy train’ carriage on the way up, vice versa on the way down, to get the best of the superb views.

Once you’re established in your hotel; there’s a selection from the four star Clarkes, with its old world heritage charm right on the Mall, albeit it lacks the opulence of more modern places, to the swanky Wildflower Hall with all conveniences but in the hills, eight miles from the centre of Simla. As with many locations in India you tend to have to compromise between older heritage hotels that exude an atmosphere of times past (with some of the restrictions and lack of amenities appropriate to those times) to the very modern, plush hotels with all amenities that can detach you from the style and ambience of the local area. 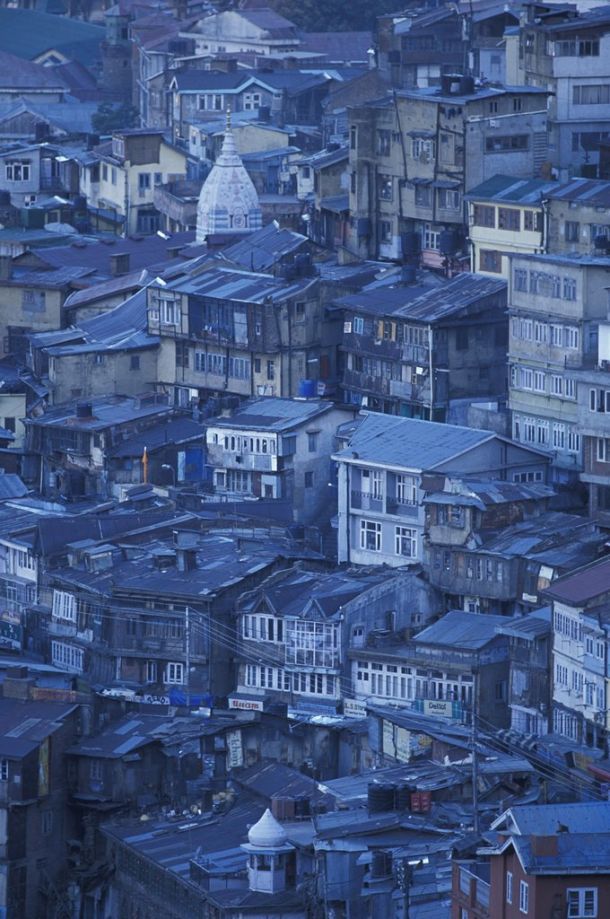 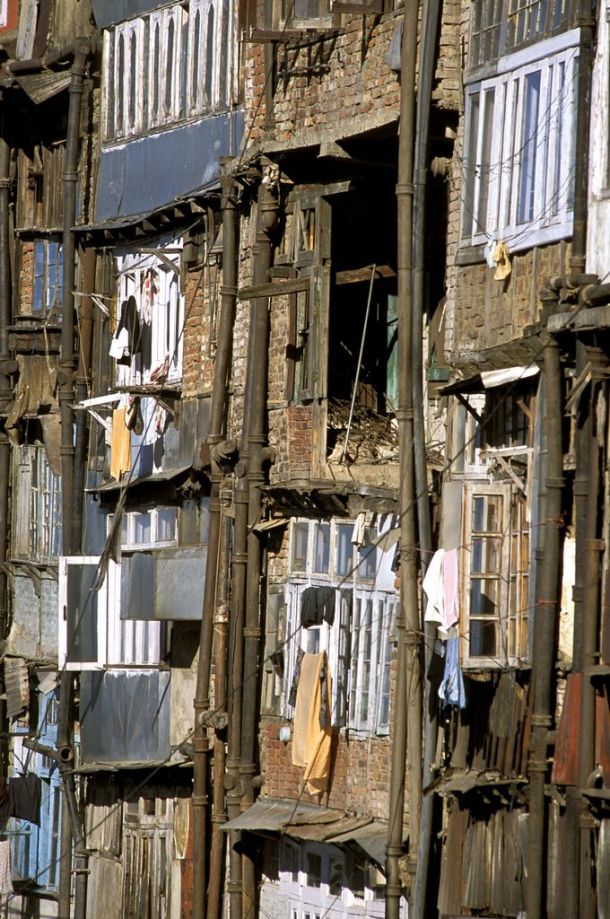 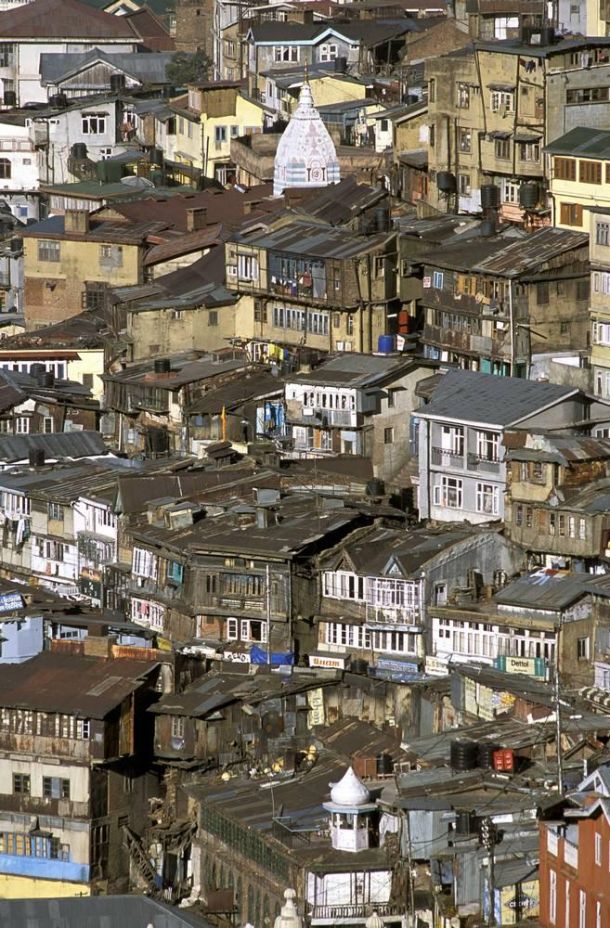 Wherever you choose to stay in Simla you’ll probably spend your time wandering around the Mall, the main thoroughfare that runs below the Ridge and from which you can explore most of the sights on offer – from the narrow and bustling bazaar, selling leather shoes, shawls, toys and wooden crafts, onward to the observatory hills and through the pleasant manicured gardens to the Viceregal Lodge. The Lodge is a step back in time, as if the British have only just left and a sense of what has past remains almost tangibly within its walls and gardens. Although Simla is undoubtedly a tourist destination we very much felt that it is an important town in its own right and the condensed and ramshackle housing that now holds a population of around 175,000 gives you the sense that you’re being given an insight into a vibrant part of India that hasn’t just been groomed for the tourist. Bewigged lawyers and traditional school uniforms on the Mall seem both incongruous and charming at the same time, whilst the architectural mix of Victorian England and austere concrete chart the inexorable development of this historic Hill Station.

Cherrie: Although the weather can be unpredictable here, the best times to visit Simla are when the British took up residence – in summer; in particular from May through to November when temperatures range from 14-28 degrees Centigrade. Winter can be very cold with temperatures falling below zero.

If you’re sensitive to altitude, remember that Simla extends up to about 2,200 metres and might leave you short of breath as the terrain is very hilly if you’re walking. As Cherrie and I choose to walk wherever we go, we were certainly feeling exhausted but fit by the end of our stay. Any possibility of feeling sorry for ourselves was dispelled by the sight of locals carrying impossible loads, such as full liquid gas containers, on their backs up steep inclines. Cherrie refused to carry our cases. 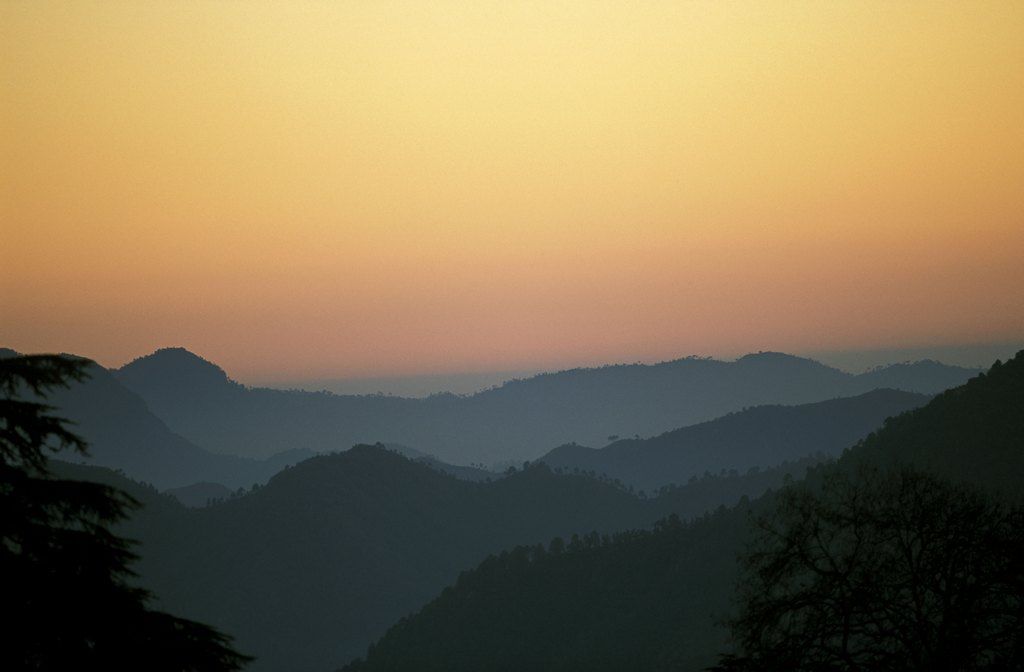 Simla is a real step back in time and is worth the visit for the scenery alone but unless you’re flying to the capital then be prepared for a long and sometimes arduous journey to get there as its very much out on a limb compared with other destinations in India.

BA, Virgin, Air India and Jet Airways fly direct to Delhi or Mumbai – Delhi being closer as Simla is itn eh northwest of the sub-continent. If Simla is part of a tour of India it might make sense to fly into Delhi and out of Mumbai (or vice versa) as this often doesn’t cost more but affords you greater flexibility in your itinerary and offers you more destinations within the country.

Delhi – Simla can be achieved by air to Chandigarh by Spice Jet, Air India or Jet Airways and thereafter by car or train.

A car from Delhi to Simla will take approx. six and a half hours and offers you more independence than other forms of transport.

You can travel from Delhi by train on train 12045 and then use car or bus from Chandigarh.

The ‘toy train’ which climbs through the foothills can be caught at Kalka, just north of Chandigarh

The Shivalik Deluxe Express is an express train with carpet, wide glass windows and cushioned seats. Food is provided but there are no stops along the way.

The Himalayan Queen is a standard train that stops at ten stations along the way. Food isn’t provided but can be purchased at the stations.

The Rail Motor Car is more like a bus with a transparent roof for 14 passengers. It’s an express service, with food provided and only one stop at Barog.

There are also two heritage carriages that run on the Shimla-Kalka route as part of a Special Heritage Train. Both carriages, built in the 60’s and 70’s have been refurbished to recreate a bygone era. It runs about once a week from September to March.

Indian visas can be obtained online or at regional centres across the UK. It’s not difficult but does require concentration and isn’t a five minute job! Make sure you have all relevant details for your trip to hand before going online; including passports, hotels, destination addresses, dates and flight details. After printing off the completed forms you’ll need passport photos to specific, not standard, sizes. Make sure you follow the online instructions precisely as it’s difficult to retrieve your information if you want to return to it or amend it – and mistakes or omissions will mean it’s returned to you.

In addition to my tips for India in general found here

Simla weather: Warm clothing as the days in December through to March can be sunny but cold and nights can be very chilly all year–round.

Temperatures in Shimla are mainly lower during winters and warmer during summer. Typically average temperature during summer is up to 28 °C or 10 °C in winter. Rainfall, as expected rises in June prior to the monsoons and peaks during August.

Good walking shoes if you intend exploring the area – even just the town itself.

Ensure that camera batteries are fully charged as they discharge more quickly in colder climates.

As with most places, early morning and evening light is by far the most evocative, never more so than in Simla with sun glinting on or setting over the Himalayas and the foothills around. Delicate mists that hang around the valleys and hilltops add to the ambience of the landscapes at this time of day.