We must visit the Maldives more gently.

The last time we were in the Maldives was on a BA transit stop from London to Colombo and other than the rather rapid descent and short stop the only thing of note was the glorious breath of warm air and the sight of blue skies through the open cabin doors that pervaded the air-conditioned aluminium we were sitting in.

The only other time was another drop off at Male from a cruise ship on which we were speaking. Determined as ever to ‘do our own thing’ we’d made numerous phone calls prior to docking in order to secure a seaplane flight over the islands as we had very limited time – all to no avail as the weather had grounded all air tours. As a pilot myself I’ve always fancied flying seaplanes but as the old Empire Class flying boats stopped flying before I started, the only option was the smaller craft of which there are many in the Maldives.

Going ashore we again asked at the port about seaplanes and they suggested we take a ferry to the ‘airport island’ and enquire there. A ferry ride later and we were standing in front of the check-in desk of TMA looking suitably keen and persistent. To cut short an hour-long story of walking from pillar to post, we were told that if there was a weather window they would find two seats on an outgoing scheduled delivery flight to the islands, which would then turn around and bring us back again – would that keep us quiet? The answer was yes, of course, and within about half an hour we were introduced to the pilot who was keen to know who wanted to fly so much on a seaplane. We chatted briefly about flying and after a particularly heavy squall blew through the harbour we were ushered to the front of the queue of a dozen passengers and asked if we’d like to choose our seats in the handsome Twin Otter seaplane. The pilot explained that for best viewing of the islands that ‘starboard out, port home’, not POSH, would be a wise choice. We sat behind the flight deck whose crew hopped into the cockpit with their smart white shirts, dark blue shorts and flip-flops! 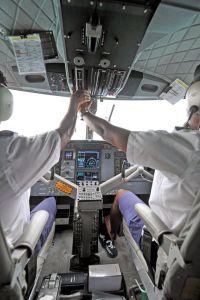 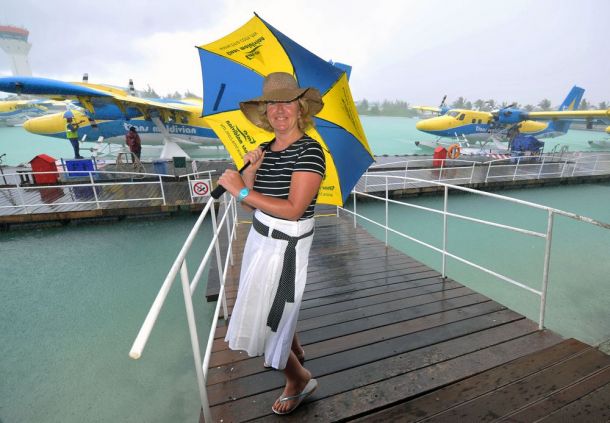 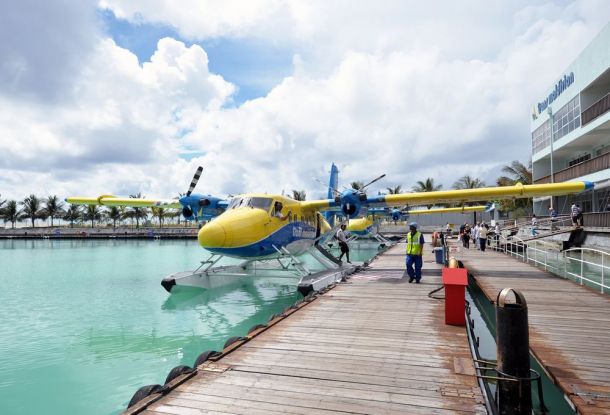 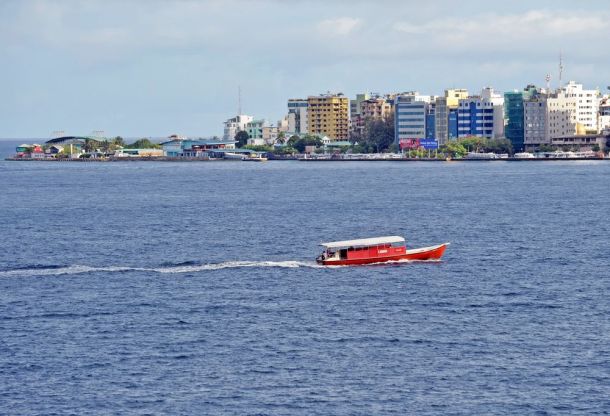 Taxiing out through the still falling tropical rain into a royal blue sky was as dramatic as it was fascinating but within minutes the throttles were open, the floats up ‘on the step’ and we were flying. From the air you can really appreciate the beauty and vulnerability of the twelve hundred coral islands and sand bars within a double chain of atolls that make up the Maldives. The average height of these is 1.5m above sea level with the highest natural point being no more than 2.4m above and over eighty percent of the islands being coral only 1m above sea level. We flew over this magical landscape for an hour before circling to land on the ‘strip’ adjacent to a sun-kissed tropical desert island. A small launch came out to meet us as we rafted alongside a little jetty floating alone on the coral waters and our few passengers disembarked and were taken ashore to start their dream holidays. The pilot indicated the best seats for our return flight and told me to get our cameras ready as he would fly low level especially on the return in order to get the clearest pictures. 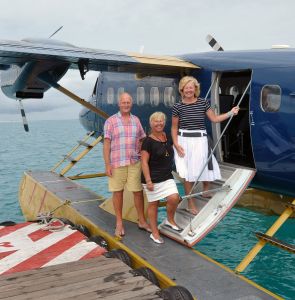 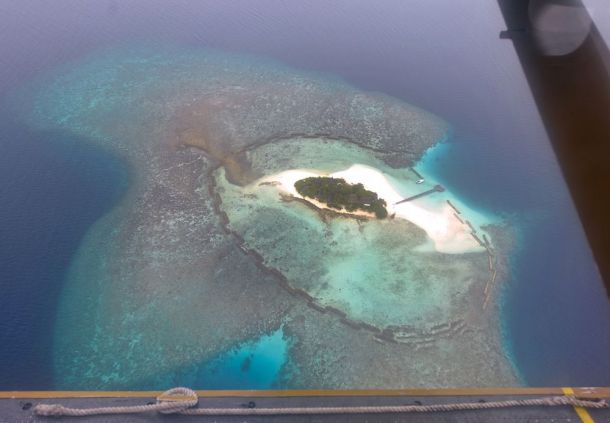 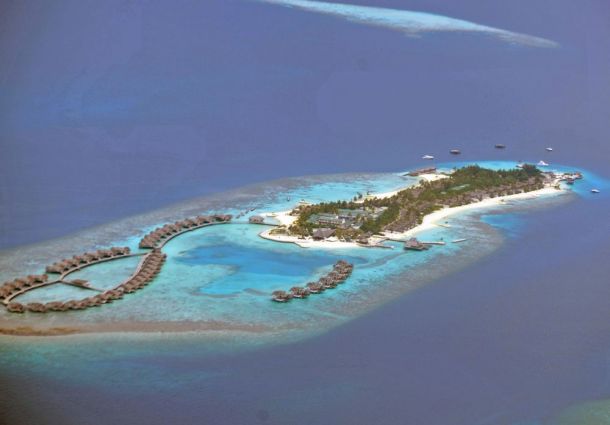 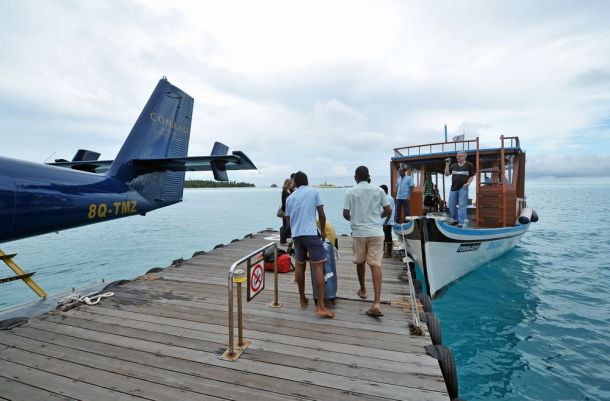 Every island varies in size shape and terrain, as well as degree of habitation and facilities – some are no bigger than the archetypal desert island with a single palm and circular sandbar, whereas others house extensive lodges, swimming pools and cabins – all of them look as though they need us to return one day. We touched down and returned to the seaport, shaking hands and thanking profusely our brilliantly hospitable air and ground crew who couldn’t have done more to accommodate our wishes; going the extra mile to make sure we enjoyed this unusual trip. I think we paid about £50 for the thrill. 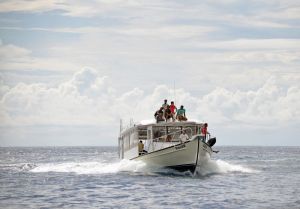 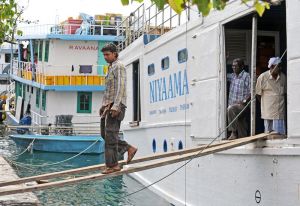 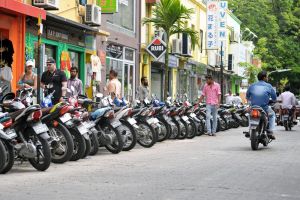 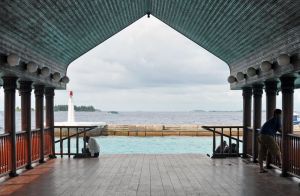 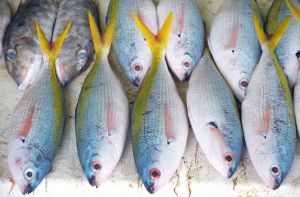 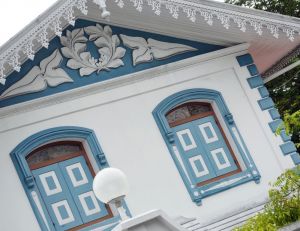 Another rapid ferry back to Male gave us enough time to explore the administrative island and some of its sights, bars and attractions – really to get an appreciation of some of its history and Buddhist background. The waterfront fish market was still exceedingly busy with trawlers and smaller craft constantly unloading at the dockside. Although I would imagine that most visitors are simply transferred to their idyllic holiday islands, the city also offers a riot of colour and interest if you have an hour or two spare.

Having become an avid snorkeler after our Galapagos holiday I’m now really keen to visit Maldives again soon to explore the coral shallows and reefs around the islands –and chill with a cooling glass of something as the sun sets.

Seaplanes in and around Maldives:

(Note: the two original seaplane operators have now merged under the one licence)

As little as possible in addition to your credit card and sun block!

Photos from a seaplane are never going to be ideal as you’re filming through Plexiglas windows which donate a milky haze to all you do – so don’t expect miracles.

A must have here is you’re a keen photographer is some way of filming underwater – perhaps with a Go-Pro or waterproof housing on your camera.

Useful to have a secure and/or waterproof protection for your camera kit as well, as there’s a lot of sand, sea and humidity about!