Chilling with Champagne and birthday partying in a friend’s waterfront Miami villa should have been quite enough for the week we stayed at this seaside Metropolis but ever-restless for further entertainment we decided to venture into the local area. Never having a been a great lover of American ‘culture’ but always impressed by their commitment to the grand gesture, our rental car trip into downtown Miami Beach was a real eye-opener.

Far from being the row after row of bland beachfront high-rise apartments we’d expected the area was chic and stylish. If you love Art Deco as much as we do then you couldn’t go far wrong by restricting your wanderings simply to Collins Avenue and Ocean Drive – it’s as if you’ve stepped into the Twenties – the simple, well defined lines, bold statements and clean colours of the ‘machine age’ architecture are reflected in the sharp decisive décor of the interiors. If you just wanted to feast on these visual delights then a couple of hours just walking the streets and wandering in and out of the grand hotels and shops would keep you enthralled with this living capsule in time. 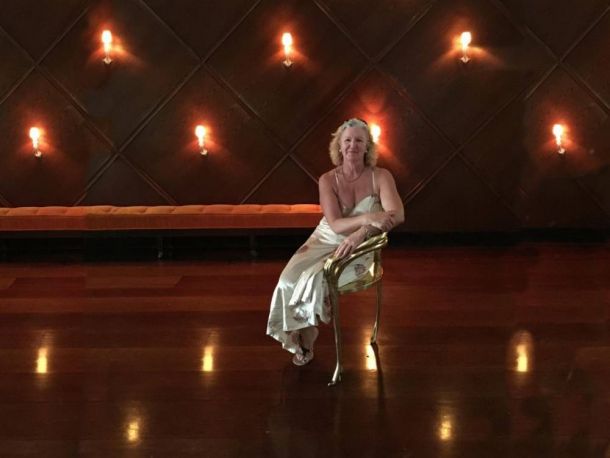 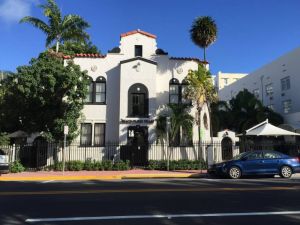 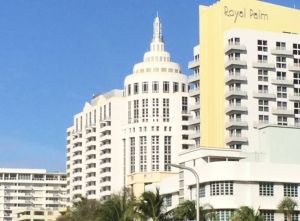 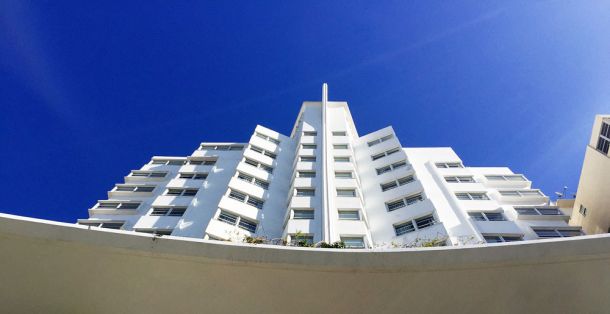 Cherrie: But being the couple we are this could only be topped by a leisurely lunch at the Delano Beachclub bar and restaurant. A circuit of the Miami Beach area will take you along the Miami Beachfront boardwalk between the beautiful wide, sun kissed sandy beach and the towering Art Deco hotels. We stopped on a whim at the Beachclub – the white tablecloths and cool shaded terrace area like a magnet to us. Lunch was a light but immensely enjoyable medley of crustaceans, cooked Italian style, complimented by a bottle or three of Gavi (we were with friends after all).

On another day al fresco snacks and drinks at the nearby National with their friendly garden bar staff had tempted us but today we hopped back into the car and our abstemious driver set off on the hour long drive into the Everglades.

Despite our satnav the Miccosukee Indian Tribe’s Airboat operation wasn’t that simple to find. Much of this area is Indian Reservation and the small, well-run business is a credit to them. If anything is designed to blow cobwebs and post lunch drowsiness away, then a roaring Chevy V8 with a six foot diameter propeller behind your head and a thirty-knot gale in your face is guaranteed to do so. The pilot of our airboat, a Miccosukee Indian, was a master of his trade and skating and banking at high speed through the narrow channels of the Everglades Water Conservation Area has to rank as one of the best thrills for years. 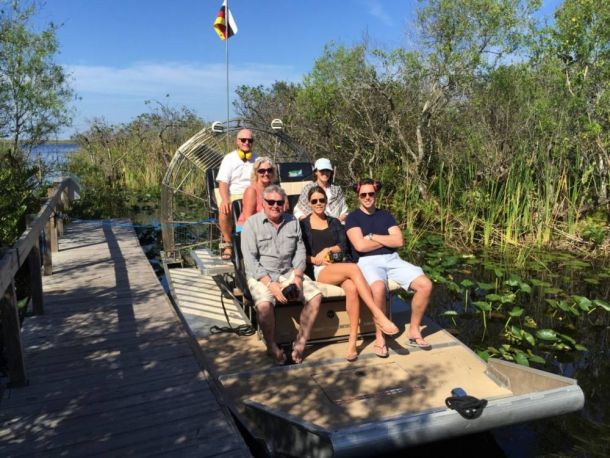 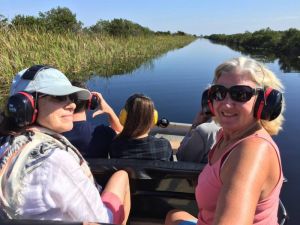 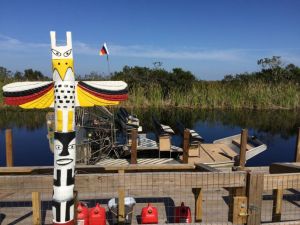 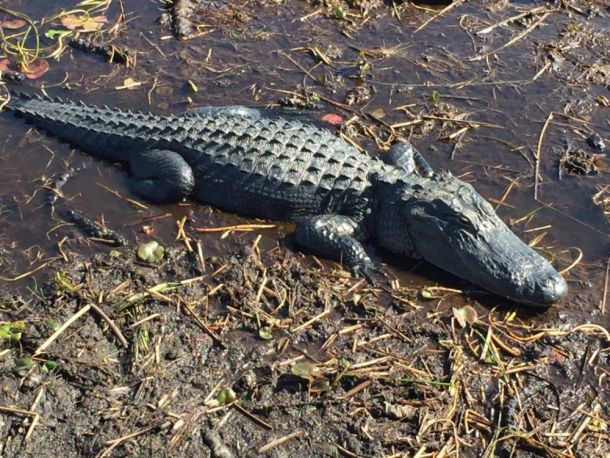 Apart from the exhilarating ride in our private craft for six people we stopped often to get very close to Alligators, Turtles and birdlife, before landing to wander around one of the ‘original’ Indian villages on an island in the swamps. The Airboat ride back was equally as hair-raising so the return road trip into waterfront Miami paled into insignificance. 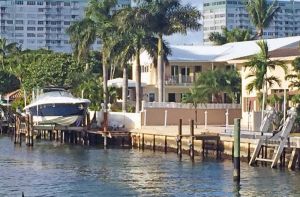 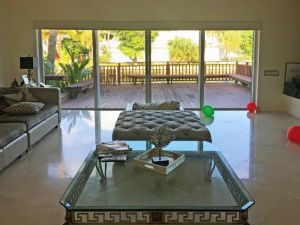 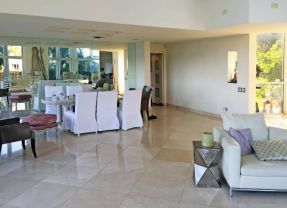 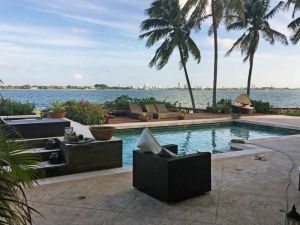 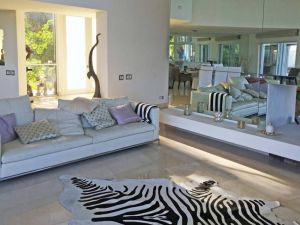 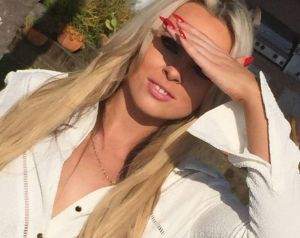 Cherrie: Our break in Miami had been very much one of circumstance, based around a friend’s 50th birthday and by coincidence our friend’s daughter, the up-and-coming Katie Tiz, was doing a glamorous photoshoot at the villa where we were staying for her latest pop song video – amazing how a simply attractive girl turns into a starlet after two hours of intense makeup – but in addition to all that we were really impressed by Miami and think it’s every bit worth the journey. We’d certainly consider a more prolonged stay and tour around; perhaps next time to include the Keys – to another waterfront villa!

We flew American Airlines both ways – on time, no hassles but stroppy and condescending cabin crew that would encourage a different choice next time.

Don’t forget to register for your ESTA ‘visa’ online for entry to the USA.

You don’t need a printed copy of it but we take one – just in case.

See the Embassy of the United States website for details

Unlike many countries, whatever you’ve forgotten you can buy when you get there.

Miami weather: We went in January (November to March is the ‘cold’ season in the States so Miami is popular with its mid-20s Centigrade temperatures) and although the days were bright, sunny and warm, it can get nippy at night; so some warm but light clothing might also come in handy.

Otherwise all year round fine and warm weather can be expected with the high 20s mid-year and slightly more expectation of rain – November being the lowest on average.

Whatever you do take sandals and shorts as much else will become uncomfortable – unless you’re on a swanky dinner date!

If you’re simply after memories then Miami is good for architecture and colour but it you’re more serious then you need to visit the city areas when the sun is quite high as long shadows from adjacent buildings can mar the results unless you specifically want them. There’s obviously a penalty to pay with the harshness of the light but it’s perhaps easier to deal with than large areas of shadow.

The airboats are surprisingly stable platforms for photography and if you’re a more serious photographer you might want to try to secure the seat next to the ‘pilot’ as this provides a better vantage point that isn’t obstructed by other passengers.

Florida Villas can be rented via: http://www.thetopvillas.com/miami/