There’s a tendency to get too serious about going on safari with the assumption that there’s a code of dress that must be adhered to in order to ‘fit in’. As with most travel it’s down to comfort and common sense. Be aware of the environment you’re going into and how you like to feel generally. If you follow a few simple notions then you’ll enjoy the journey without getting too hung up or precious about clothing. You certainly don’t need to pack a ‘little black number’ unless you’ve got something in mind for the privacy of your luxury tent! 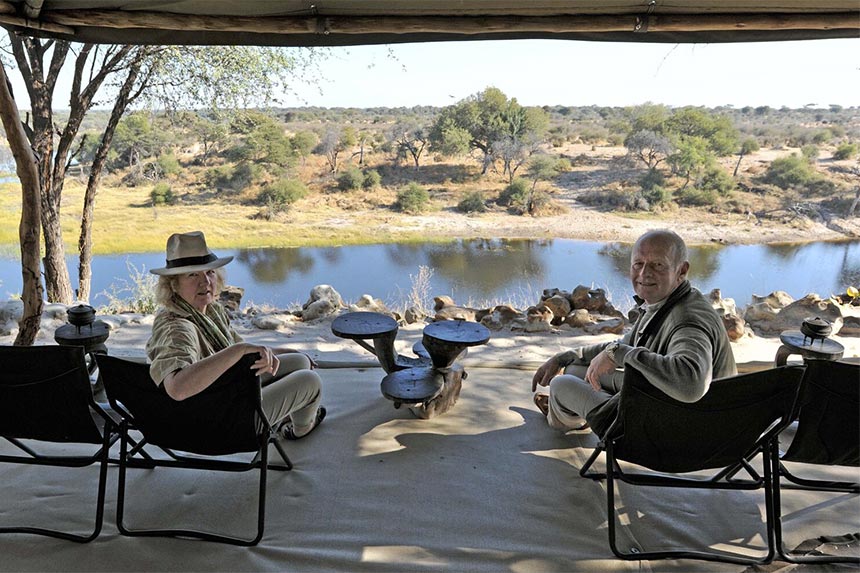 We seem to do it every time but with safari in particular don’t make the mistake of taking too much clothing. Pack what’s comfortable; casual and semi-casual clothes that can be easily laundered and that will fit into the bush as well as to relax in. You’ll find that most camps will launder clothing for you within the same day so there’s no need to carry a wide variety of designer clothes for the whole trip. Unlike many holiday destinations where you can be very much ‘on show’ in clothing, safari is a place for the understated, where empathy with your surroundings is much more acknowledged.

You’ll find that most on safari wear safari colours (khaki, beige, stone) & materials (cottons and breathables), partly to fit in with the environment, mainly because it’s the most practical as you’ll be bumping around in dusty vehicles for the most part and its only in the evenings when you might want something smart casual to relax in.

We like luxury and quality but we also like practical – and one of the more amusing sights on safari is someone who looks as if they’ve stepped out of a bespoke tailor’s shop window without a crease in sight other than the razor-like ones down the front of their shorts. They’re usually the people who don’t like to rise too early or sit too long over animals but just want to ‘tick the box’ and move on. It’s everyone to their own, obviously, but also try to avoid looking like Indiana Jones or a paramilitary recruit in disruption pattern camouflage as this can cause problems with the local regime.

I think the whole point of safari clothing is simply loose comfort and being at one with your environment. Avoid white as its too stark in a land of pale browns and won’t stay white for long and give a miss to dark colours (black and blue in particular) as they attract biting insects.

Although daytime temperatures vary from the high twenties centigrade up to forty depending on what time of year you go, you will undoubtedly be chilly in the early mornings and evenings at whatever time of year – so my suggestion is to take along some long sleeves and light jumpers for both times as the early morning game drives before sunrise and sitting around the campfire in the evening will nip at you irrespective of what’s in your hip flask.

I’m unfortunate in that every insect known to mankind bites me; whereas Geoff uses me as his repellent as nothing bites him when I’m around. That said, if you’re like me, it’s useful to have long sleeves for dawn and dusk as this is when the bugs are most active. If you’re sensitive to sun then you’ll need plenty of protection anyway and its best to be wise about this as even in a covered jeep you’ll be constantly exposed to strong sunlight and it’s easy to ignore it if there’s a cooling breeze.

Geoff and I seem to buy hats each time we travel as we prefer to buy cheaper department store hats that will squash flat, breathe but absorb perspiration, ideally have a neck strap to keep them on our heads and wash easily. When we’ve bought super hats we’ve been more precious about them than necessary as they’re difficult to transport without damage and don’t seem to fare any better in terms of performance. It’s easier to throw away a cheapy if washing doesn’t resurrect it than part with a treasured fedora.

I like to take a couple of simple accessories such as a sarong and/or light scarf that can either wrap around my face to protect from dust in our speeding jeep, or as protection from the sun around my neck and shoulders – or over my knees and legs if in shorts. Geoff’s taken to doing the same, especially if we’re walking in the bush as the back of the neck is quite vulnerable and you can easily suffer from heat stroke if you’re not careful. He tends not to wear quite such delicate patterns!

The chances are that you might get caught in a rain storm, so simply prepare for this with a light rain jacket; unless you’re going to be in a vehicle anyway in which case it’s superfluous. Sensible shoes (for walking) and sandals (for chilling or riding in jeeps) are all that’s necessary and although I prefer a choice and a change, many people seem to be happy with the newer hybrid breathable trainers that cope with walking, wet weather and putting their feet up in the evening.

I’ve put together my suggested packing list and split it into two – safari specific and general. It’s not exhaustive as you’ll have certain personal preferences but you should use it as a minimum. I think we’ve only found one camp that didn’t do laundry so, I’ll say again, don’t overdo it. If you’re flying internally in light aircraft then there will be severe weight restrictions per person that include camera kit as hold space is very limited. You can pay for an extra seat to carry stuff (if its available) but some aircraft only carry four or five people so you need to make sure of restrictions and options well before you go on safari.

Apart from the obvious this list applies to both male and female.

 A pair of casual trousers and a couple of pairs of shorts
 A light cotton dress
 4 or 5 long-sleeve shirts
 4 or 5 short sleeve or T-shirts
 A jumper
 A warm, showerproof jacket
 A pair of walking shoes
 A pair of sandals (casual and for canoe/jeep)
 Night-wear and swim wear if you do either?
 A hat with wide brim and retaining cord
 Sarong, shawl or cloth wrap for neck, shoulders, legs.
 Your normal selection of underwear

Remember that although basic, the camps you’ll go to have acknowledged that we’re in this century, so you don’t have to take enough kit to kill and skin an animal or cook it over an open fire – all of that’s done for you. So, there are not many additional items that you wouldn’t already take on any normal holiday. When we lived in India we had all sorts of stuff like syringes, anti-venin, first aid kits and knives, tools and other equipment to keep us self-sufficient. Whilst I can’t say ‘don’t do it’ as it’s your choice as to what keeps you happy, we never take syringes and needles (as wherever we are probably won’t have the stuff to put in them) and we tend not to anticipate every possible disaster including meteorite shower, as the environment, whilst inhospitable at times is generally benign unless you do something stupid. For the most part your camp guides will keep you away from harm, in vehicles and boats that are fit for purpose and you’ll be eating food that’s as good as you’d get in ‘civilisation’. If you relax and apply simple common sense then you shouldn’t have a problem and won’t need to take a pharmacy and hardware store with you. In our experience we only ever had problems with people who did things in the jungle that they wouldn’t dream of doing at home – such as the lady who left all her diabetes medication behind because ‘she wanted a holiday away from it all.’ She got one as she was out of it for some time! Anyway…

 Camera – whatever you’re comfortable with or see Geoff’s list if you’re competing with Attenborough. Remember the chargers, data cards and spare batteries.
 Binoculars
 Plug adaptors. Power is 220/230 volts with generally 3 round prong sockets (with 1 bigger than the other 2) or 2 small round prongs. Your 110V video chargers should work safely on the 220V supply as they step down the current.
 Water bottle – many camps give you these but make sure that you’ve got the ability to regularly hydrate.
 Water/dustproof bag – for camera kit/binoculars in canoes or dirty linen in camp
 Sunblock and after-sun/moisturiser
 Lip balm
 Mosquito/bug repellent and Anthisan
 Malaria tablets – definitely needed in Zimbabwe and Botswana
 Multi-purpose knife eg. Leatherman with knife, scissors, tweezers, screwdriver etc (don’t pack it in hand luggage)
 Sunglasses with polarized lenses
 Books/e-readers for reading during leisure time
 Books on birds & wildlife – although you will find them in the camps
 A journal to record the wildlife you see and people you meet – unless you don’t mind loads of pictures of nameless beings.

Let us plan your own inspiring safari adventure