Notes on latest top-notch nosh and nightlife in New York.

A week ago Olly,  our eldest son and part of the TLC team, jetted off to New York on a business trip with his co-director in another business.
Not only did he pick the worst weekend since ‘Snowmageddon’ with the city smothered in snow but he seems to have spent all four days in some of the best eateries the city has to offer. We also tasked him with field testing some of the kit we’re compiling for travel ‘must haves’ (more of that in another post) but in the meantime here’s his personal snapshot of schmoozing with the stars.

‘Much of my visit to New York this time was to ‘network’ with people who I’ve spent months talking to over Skype and the internet. I saw it as a really good opportunity to meet face-to-face and socialise whilst cementing business relationships. Needless to say, much of this was done in bars and restaurants (what better way to do business?) and I’ve shared a few of my favourites with you luxury travellers – places I’d definitely go back to when next in New York. 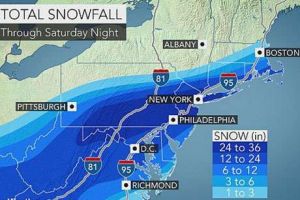 As you’re probably aware, with JFK under nearly three feet of snow and the whole of the Eastern seaboard turning white, travel was somewhat disrupted but having pre-planned numerous meetings weeks beforehand we were lucky that flights and transport slotted together well.

When we’d finished larking about in the deep snow – which was cleared remarkably efficiently and quickly to get New York back on its feet – we used Uber taxis extensively and walked for the rest;

New York being really easy to get around in. 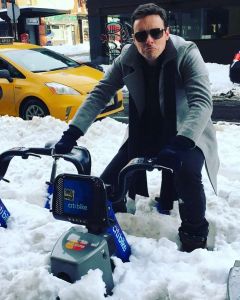 George, my co-director decides against using a Citibike for getting around

If you get the chance you really should try these places –I’ve added addresses and url links to websites so that you can check them out in more detail. Most of them were in mid-town Manhattan and hopefully my notes will give you a short insight into each and tempt your taste buds. 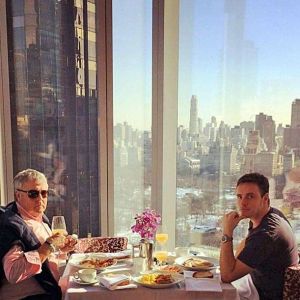 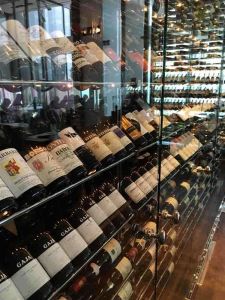 Too much just for breakfast!

It all kicked off with a Breakfast meeting in the sky. At the very top of the Time Warner Center, the Mandarin Oriental, New York, is perfectly situated for viewing much of Manhattan and also getting the day off to a cracking start.

Even if the term ‘Wow factor’ is jaded, the incredible view is anything but as we sat by the window and looked over a largely white Central Park.

It was certainly a good introduction to our stay as we enjoyed unlimited orange juice and coffee to accompany our scrambled eggs on toast with all the English trimmings. 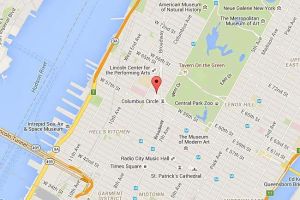 Considering its location, the friendly service, generous portions and reasonable bill at the end, (£100 for 3 people inc 20% tip) it makes Mandarin Oriental a place well worth visiting while you plan the rest of your stay – if you haven’t been lured by the five star facilities as a guest in the first place. 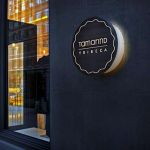 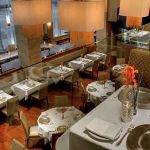 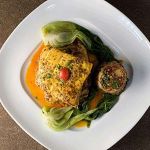 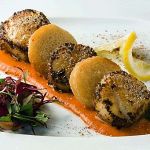 After a hectic day of meetings we were ready to chill before heading out on the town with business colleagues, so stopped into Tamarind, which is a super smart Indian cuisine restaurant.
We only wanted a snack here and a couple of drinks (although the waiters were determined to lay a table for us but gave up after four attempts). We enjoyed the snacks (as the chefs specialise in cuisine from most of the different regions in India and perform their art in an excellent Tandoori Kitchen) and especially the Tito Vodka cocktails. I’m not sure what the definition of a cocktail is; as far as I could see ours consisted of nothing more than neat Tito Vodka (http://www.titosvodka.com ) and a twist and slice of lemon! 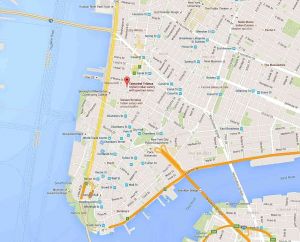 This 11,000 sq.ft restaurant on two-levels, seats 175 people and is flooded with natural light, thanks to almost 100 feet of windows throughout the restaurant.
There’s a lot of care taken over the food and especially the presentation – it’s a place I’d like to go back to for an evening as the restaurant looked very appealing. 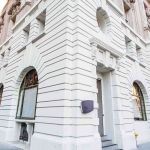 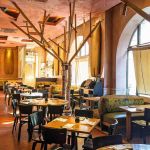 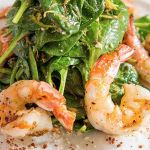 The treat we’d lined up for ourselves in the evening was Nobu.

The Michelin starred restaurant is quite small and the interior didn’t at first suggest that we were in one of the best restaurants in New York; although the natural textures, birch trees, wood floors and a wall made of river stones all add to the ambiance. 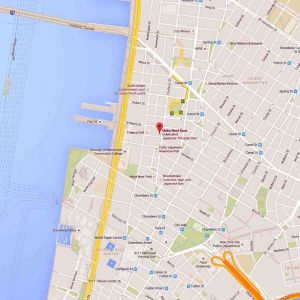 Dining in any city is always very much a fashion consideration and Nobu is currently one of the top favourites as ‘the place to be seen.’
We were in the company of some high flying radio execs and it seemed as though we tried every dish on the menu – if the endless stream of delicious plates that crossed my palate was anything to go by and the pricey bill at the end ($750 for four).

The Kobi beef was outstanding as was the Sake rice wine of which there are numerous choices and blends.
It was a great fun night, helped no end by the friendly service – as well as the Sake! If I had any criticism it would be that Nobu lacked something in atmosphere.

Not that you’d think we needed to recharge our food batteries after the visit to Nobu but the next day saw us in Bareburger on 366 West 46th Street where there was no shortage of good quality and volume with the superb fresh burgers – all at a reasonable price – friendly service (which seems to be the norm in New York, despite the ‘have a nice day’ mantra which can be off-putting to the cynical). 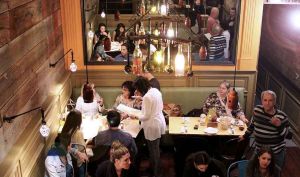 Bareburger claim that all of their meat is ‘free range, humanely pasture raised, antibiotic, gluten and hormone free’ which really makes you wonder what we normally eat! 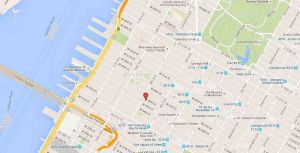 They’ve made an art form out of the bog standard burger and you can choose from Elk, Bison, Wild Boar, Turkey and Duck as well as the more mundane but usual beef – and that’s before you immerse yourself in the seemingly endless choices of bun, bacon, cheese, veggies, sauces and spreads.
As we never seemed to eat without a drink we stuck to American Beer here, which seemed to be more like an English Ale than the lagers that are more popular nowadays.
After eating at Bareburger there was no danger of us lasting until dinner time – no matter how many high powered meetings we might have. 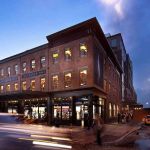 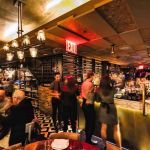 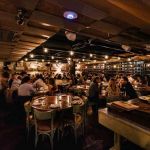 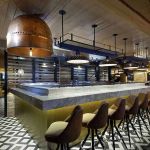 Having dined with the stars at Nobu, I have to say that Catch was my preference for cuisine and atmosphere.
As the name suggests, Catch is a seafood-restaurant, set in a landmark building at the heart of Manhattan’s Meatpacking District. Although you’d think at first glance that service might be an issue in this 400 seat, three-level restaurant it’s actually smooth and efficient, although it falls short of friendly. The restaurant offers a variety of unique dining experiences, smart bar and boasts an open kitchen and communal dining options amidst its impressive interior. 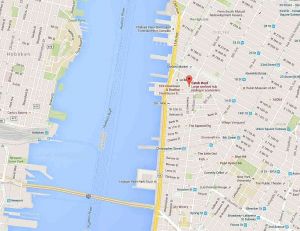 The food was excellent and like Nobu seemed to pass me by in a never ending stream of dishes that left me with a sense of well-being and total lack of recall as to what I’d eaten – as we were guests and I didn’t order. I’m told it included Salmon Bourbon-Miso Black Cod Lettuce Wraps, Belly Carpaccio, Cantonese Lobster and Crispy Whole Red Snapper – it was a delight whatever it was!

Overall Catch is a great spot to dine and the atmosphere is lively and upbeat with plenty of good music. We were being treated to dinner so I don’t know the exact cost but you can safely list it under ‘expensive.’ 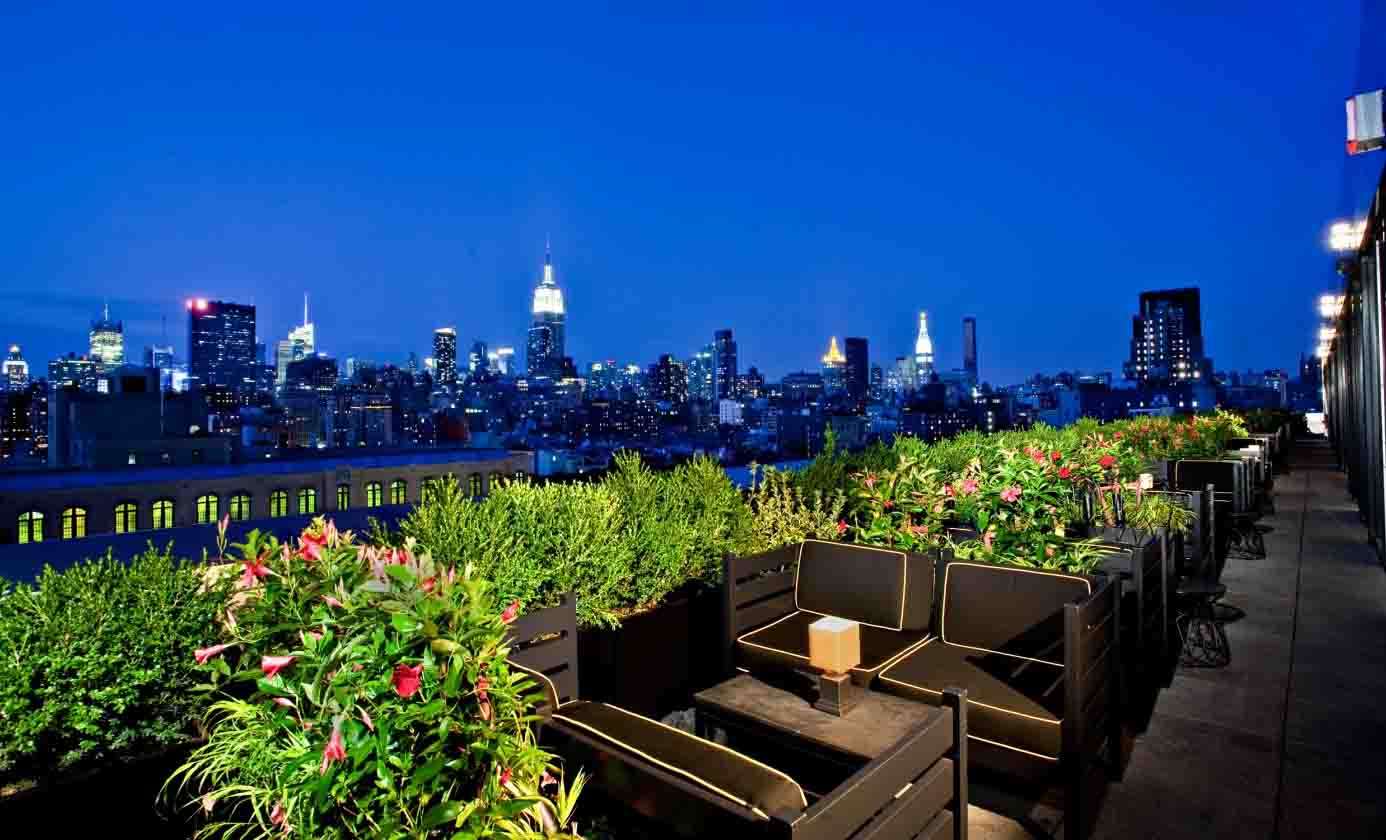 The Penthouse at Dream Downtown, for me, is the ultimate rooftop night club. The stunning panoramic Manhattan skyline view is unbelievable with views straight to the Hudson River and Empire State Building. I so wish I’d been here in summer, as the open balcony was less than appealing in sub-zero temperatures. 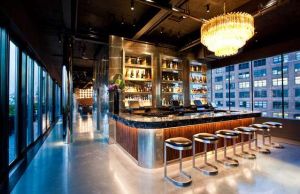 We were at PHD for ‘post dinner drinks’ – not that we really needed them but ‘when in Rome…’ The venue hosts big act DJ nights and the atmosphere is ‘rich and beautiful’ both in ambiance and clientele – definitely a place to rub shoulders with the beautiful people. 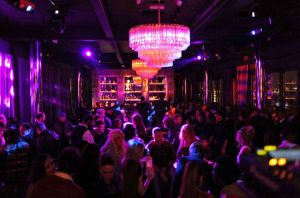 You do pay the price, however, for this atmosphere as a table will cost you $600, which entitles you to nothing more than a seat and a bottle of spirit – and there’s a minimum $200 cover charge that is popped onto your credit card that you’ll leave behind the bar. 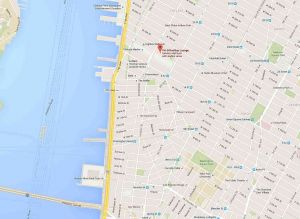 Despite any financial haemorrhaging that might occur, PHD is a must for those wishing to dance the night away in one of New York’s most iconic night clubs

New York has an endless spectrum of choices for eating and drinking to cover every ethnicity known to Man – but I think you can’t go far wrong by spending a few happy hours in any of the stunning venues above. 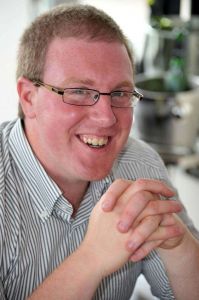 As well as being our eldest son, Olly runs the Social Media advertising and promotion side of The Luxury Couple and is also involved in his own business of App Development – hence his trip to the States.

Olly has travelled extensively and often gets asked by us to field test products so that we have another opinion to judge them by, before sharing our thoughts with you. We hope you’ll find Olly’s notes as useful as our own.