For the love of Pete! Part 1

Preconceptions prevail indefinitely unless dispelled by new experience.
Certainly, neither the crew-cut Colonel Rosa Klebb lookalike on the security scanner, nor the frosty monosyllabic border guard with curt instructions to ‘look at me’ as he tried to reconcile the death mask on my passport with the bronzed Atlas in front of him, did little to welcome us to Russia but simply endorsed our expectations. 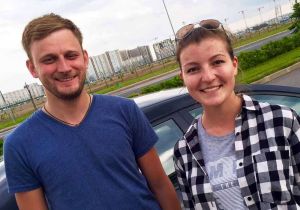 The arrival of a young ‘imp’ with ripped jeans and cheeky smile dispelled this immediately, as Natalia introduced herself as our guide for the next two days.

We’d always wanted to go to St.Petersberg, famous for its grand boulevards, lacework of canals, elegant baroque buildings, glittering palaces and onion-domed churches that make this city one of the most finely planned cultural capitals of ‘Europe’.
We’d been through the hoop of investigating our own visas for Russia and given up in frustration; in favour of an organised but tailor made tour for the two of us from the improbably named ‘ St.Pete’s Private Tours’ which suggested that an Orthodox clergyman was moonlighting.
We complained to Natalia that Russia had wanted – an invitation from each hotel we’d be staying at, an explanation of date of entry and purpose of visit for every stamp in our passport and a hefty few hundred pounds for the visa. St. Pete, however had agreed to arrange special visa vouchers that covered the duration of our stay, as well as take us privately to every location we wanted to visit in St. Petersburg. Natalia also pointed out that British visa requirements for her were similarly onerous. Tit-for-tat!
We’d decided on St.Pete’s Private Tours after trawling the internet and sending our requirements to numerous agencies who claimed to offer similar services. Naturally suspicious of appointing anyone on the internet from thousands of miles away and sending them money months beforehand, we had visions of turning up in Russia and not being able to enter – and being a few hundred financial pounds lighter because St.Pete was a work of fiction! 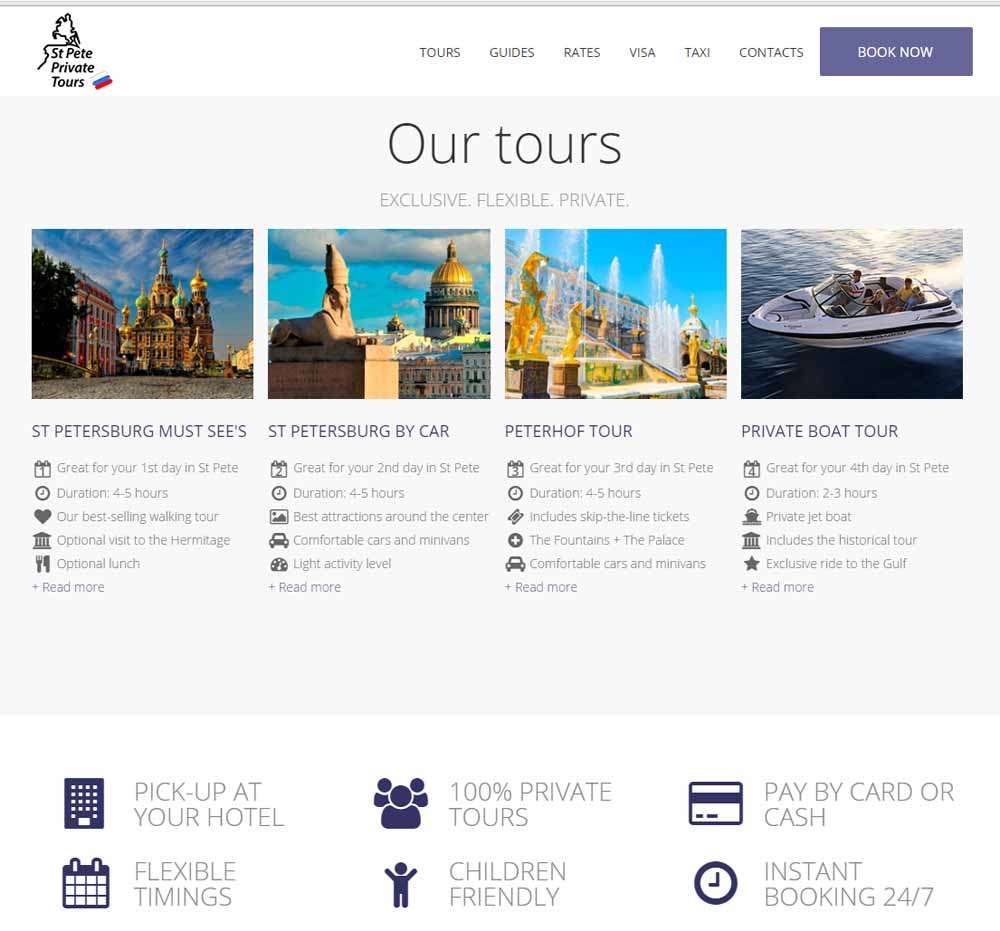 St.Pete’s clinched it by making all the arrangements with us but saying that we could pay as the tour progressed – so other than the fact that our moonlighting clergyman might not turn up, there was no financial risk. In addition, St.Pete’s recommended and organised dinner bookings and a night at the Kirov ballet in Mariinsky theatre (after all – when in Russia, go to the ballet). Anna, our contact at St.Pete’s was the epitome of efficiency with all communications and organisation – very impressive.

Meanwhile, Natalia introduced us to our driver, Konstantin, who would take the two of us around all of the sites on the first day and then collect us/drop us off for a walking tour on the second. Within an hour Natalia had been sensible enough to determine that we wanted to see as many locations as possible and get an appreciation of the city without, for example, seeing every one of the three million exhibits in the Hermitage – our powers of retention of endless paintings and porcelain exhibits wane very quickly as we become blinded by the sheer magnificence of it all. 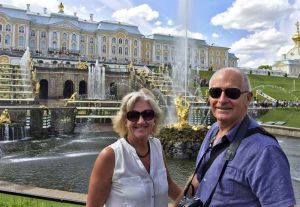 Accordingly, Natalia threw our plan out of the window and rescheduled our two days to allow for maximum exposure, minimum brain and leg ache. We negotiated a few extra roubles for additional Konstantin time and were immediately whisked off to Peterhof – a 40 minute drive away from the city centre.

What follows in Part 2 is a pictorial reflection of our schedule with notes but it doesn’t reflect the sheer pleasure of walking past hundreds of people queuing to buy tickets as Natalia ushered us to the front with her pre-paid entry vouchers.
Yes, you can do St.Petersberg on your own but there really is no substitute for paying a few thousand roubles (not much different from the visa cost but without the hassle) for a personal guide who saves you a fortune in visa fees, a mountain of time in queuing for tickets, buzzes you about between landmarks saving both time and frustration in finding them and gives you a personal and intimate insight into modern life in the city. 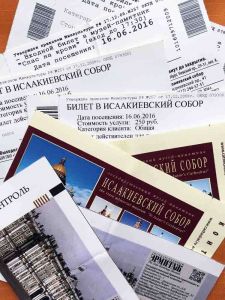 As one of my primary interests is photography, Konstantin was kept fully occupied in buzzing around monuments and landmarks so that I could get the sun in the right position – a challenge he met with all the enthusiasm of a rally driver – fast but safe.

Similarly, Natalia changed the itinerary ‘on the hoof’ as rain was expected in the afternoon of our second day. She asked Konstantin to drive us to each of the sights in the morning whilst the sun was out and revisited them again in the afternoon so that we could wander inside at leisure as it rained outside. It’s Natalia’s initiative and the flexibility of St. Pete’s Tours that set her and them apart from the norm and we’d have absolutely no reservations in recommending them to any would be visitor to St. Petersburg – or elsewhere in Russia as they offer tours throughout. 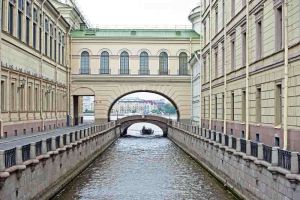 Regarding St. Petersberg, we were deeply impressed. The drive through the hinterland presented the almost predictable ‘cold war’ architecture of massive featureless concrete apartment blocks – which are still being built anew today on vast tracts of reclaimed land around the Neva River delta on which it stands.
The city however was designed as a reflection of all the best parts of Western cities by Tsar Peter the Great in 1703 and you’ll often feel as though you’ve entered parts of Paris or Rome.

The most overwhelming reaction is that Russia, in St. Petersberg at least, has finally embraced its history, rather than attempting to erase it – by rebuilding, preserving and refurbishing landmarks and places of historic interest that now chart their heritage from ostentatious royal past right through the turbulent years as Petrograd and Leningrad, revolution and wars, up until present day.
It’s obviously a huge tourist dollar incentive for Russia but this itself is a major departure from the isolationist paranoia of the past – notwithstanding any whiffs of resurfacing imperialism today.

The most remarkable aspect of our private tour was the realisation that many of the palaces we were to see were virtually all gutted by Germany in the Second World War and it’s a huge tribute to Russia that she has meticulously rebuilt and refurbished them to such an impeccable standard – a truly remarkable feat given the plethora of highly skilled people that must have been needed to fulfill such a gargantuan task. 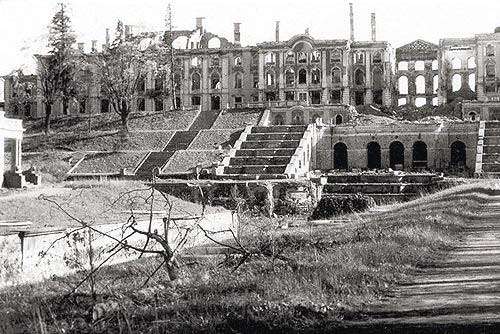 Make sure you see the ‘before’ pictures in black and white that adorn the walls on your exit from these palaces as they give you an insight into the horrific destruction wreaked throughout Russia and their herculean efforts to rebuild – many of which were really only completed a couple of years ago.

If you want to design your own hassle-free visit to St. Petersburg then you’ll do well to contact St.Pete’s Private Tours. You’ll no doubt have your own ideas and preferred itinerary but our next St.Petersberg posts will show you the wonderful sights we saw – they might just make you put St.Petersberg to the top of your wish list.

We fulfilled a long held curiosity to go to Russia and St Petersberg surpassed our expectations
We can’t wait to go back – perhaps to Moscow, or to see snow on the ground, which must be truly enchanting in such beautiful settings.
We came away more open-minded about Russia but overwhelmingly impressed by what she has achieved within St. Petersberg – and St.Pete’s is certainly a great ambassador for this rapidly emerging destination.

Part 2 is a more detailed and pictorial round-up of the sights and attractions we visited in our two days in St. Petersberg, to give you a flavour of what lies in store for you.

Part 3 will give you an insight into eating on the go and having a great night out at the ballet in St. Petersberg