Every seasons’ fare at The May Fair

Home » Accommodation » Every seasons’ fare at The May Fair

Playground of High Society since 1927; graced by King George V and Queen Mary; showcase for London Fashion Week and the British Film Institute; masterpiece of contemporary style and opulence – The May Fair Hotel has evolved to lead expectations; like a charismatic chameleon throughout each era of its existence.

Its initially slightly dour and conservative facade, despite the decorative trappings of Christmas, is quickly forgotten as Cherrie and I are ushered through its glass doors by liveried doormen into a smart atrium of clean, contemporary design awash with marble that hints at its £75 million 2006 refurbishment. 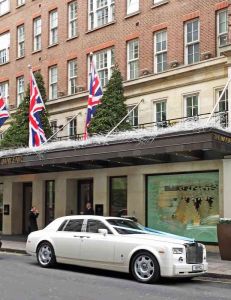 Its easy to forget that we’re just seconds from the Tube Station at Green Park and in the heart of London chic – bars, restaurants, shops – you name it, you’re in the thick of it. 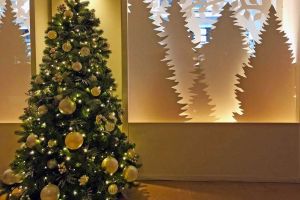 We’re here for a gala night but have arrived early enough to book into our suite – which is very graciously upgraded by Botho Stein, Deputy General Manager – into an intriguing seventh floor duplex suite on two levels with its own vaulted ceiling that houses the bedroom – with separate lounge, casual, bathroom, bar and office areas below. Adriana, our bubbly  and courteous receptionist, shows us to our room and takes great delight in demonstrating its facilities that include one of the best stocked bars we’ve seen. 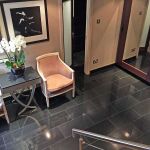 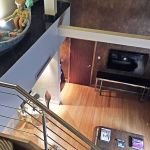 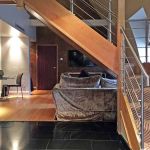 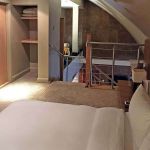 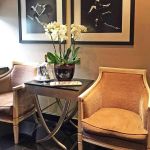 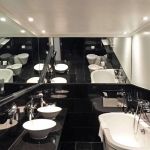 en suite and a 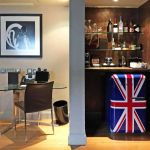 The hotel is large with 404 rooms and occupies a significant corner between Stratton and Berkeley Streets, creating a 360 degree square of hallways, that whilst unremarkable in their own right, open new worlds through doors onto rooms and suites that will impress even the most jaded. We take a sneak peek into the amazing Schiaparelli and Ebony Suites, two of eight signature suites that will blow your mind – and your bank balance – before deciding to come back to earth and go out to lunch.

One of our old haunts is Langan’s Brasserie, just around the corner of Stratton Street and we’re dismayed to see its their 40th anniversary – which is probably the last time we were here! Reassuringly, nothing has changed – from the ambiance and fine dining through to the smattering of celebrity lunch companions – all wrapped up in  a buzzy package that keeps us happy for a couple of hours. Such a pleasure to return. 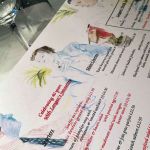 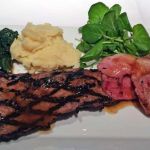 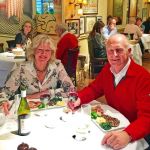 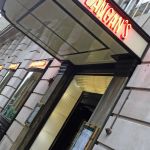 We walk back to The May Fair, pausing to watch a lithe model strutting to the rhythm of London outside its doors on an impromptu photo shoot, before heading back to our room to top off lunch with the complimentary fizz and platter of coated strawberries that we’d been welcomed with. 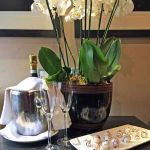 Had it not been for the nostalgic pull of Langan’s, we could easily have stayed in the hotel and lunched at the May Fair Kitchen, a smart clean and welcoming eatery on the ground floor, or whiled away time in the May Fair Bar on the corner; which seems to attract a full and lively clientele of businessmen from mid-morning onward, who obviously feel the venue perfectly conducive to oiling the wheels of industry! 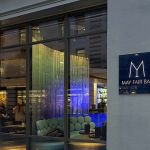 The May Fair Bar 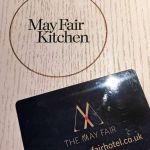 and May Fair Kitchen 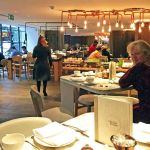 both thriving food and 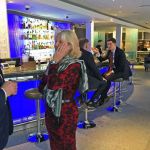 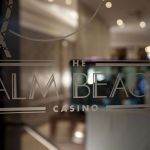 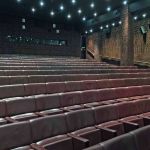 As evening approaches our spacious wardrobes and large en suite bathroom enable us to dress without hampering one another, so that by the time we head for one of the banqueting ballrooms downstairs we’re fully relaxed and ready for the coming event. Cherrie steers me away from the Palm Beach casino (one of the largest gaming rooms in London) and we pop our heads into the 200 seat film theatre but Film Week is some way off and there are no private screenings being shown. 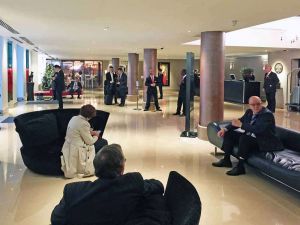 The May Fair is pleasure on a grand scale and although the very area of London it sits within, Mayfair, is associated with extravagance and opulence, the hotel itself simply seems to quietly reflect the character of whoever visits – so all feel at home – however conservative or ostentatious they may be.

The gala evening passes in a colourful blur under the simply enormous Art Deco chandelier of our banquet room before we gratefully retire to bed, thankful for our choice to stay with the May Fair rather than head out to ‘other parts’ – the beauty of its location, whatever nightlife or high jinks you want to indulge in under London’s lights. 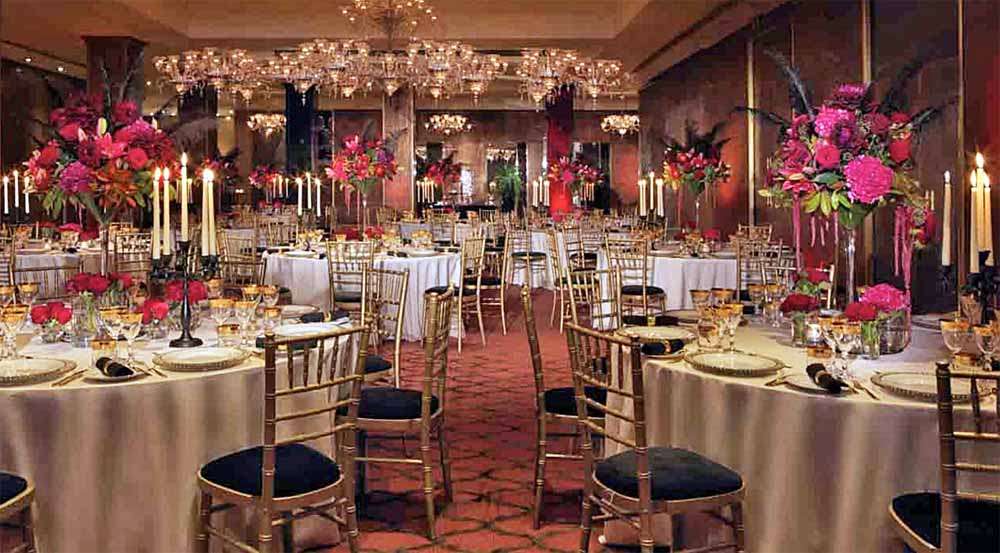 After a leisurely late breakfast, served by one of the few ‘London ladies’ who must be left in service, we bid farewell to Botho, the manager; who tells us as we remark on the chandelier that overlooked four tables of ten last night that a guest had once remarked how it was ‘just like theirs’. Incredulous, he had asked if they indeed had one like it at home. “No silly; on our yacht”, came the reply! 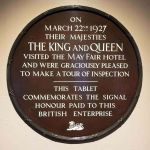 Whatever size light you have on your yacht, you’ll find a welcome and room to suit at The May Fair. Its a rather large piece of history that exudes the style of today without being brash or losing its charm – and wherever you’re going in London, on business or pleasure, you couldn’t be better situated, whatever the reason – or season. 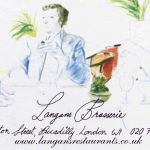 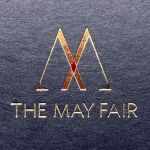 Useful links to The May Fair Hotel website and Langan’s Brasserie – both in Stratton Street, Mayfair, London