Fateh Garh – when a lake doesn’t float your boat

An alternative luxury hideaway in Udaipur, city of lakes, that won’t sink your budget.

Udaipur, sometimes optimistically called the ‘Venice of the East’ is one of the principal attractions in Rajasthan, famous for its Lake Palace that ‘floats’ ship-like in the middle of Lake Pichola,
We were initially pleasantly surprised by the rich and fertile lands surrounding the approaches to Udaipur, where it lies on the southern slopes of the Aravalli Range in Rajasthan. The northern part of the district consists generally of elevated plateaux, while the eastern side has vast stretches of fertile plains that we had not previously associated with this state; better known for its deserts.
The southern area is made up of rocks, hills and dense forest with two important access points carved in the Aravali ranges, serving as links between Udaipur and Jodhpur Districts.
Udapiur, itself, offers a fascinating insight into India’s royal lineage and architecture. 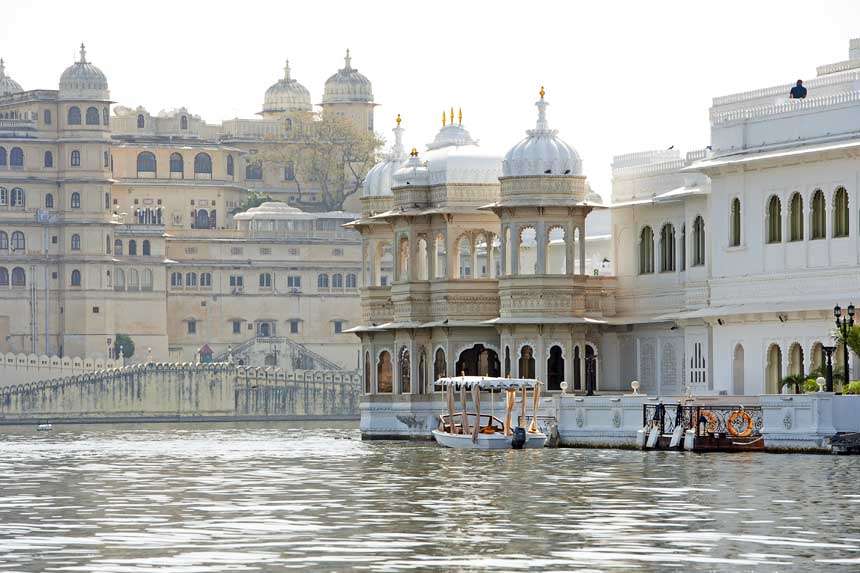 Although much of the historic architectural tapestry of the city lies on the shores of the lakes and is best viewed from a boat, the diligent traveller can gain a much deeper perspective of the city and its history by venturing into the City Palace – a tour that can take you a good couple of hours to conduct in any depth and which gives a detailed description of the city’s history, art, furniture and royal heritage until subjugation under British rule. 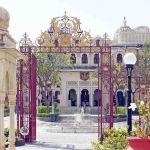 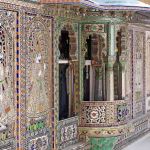 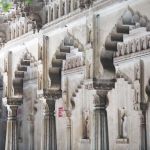 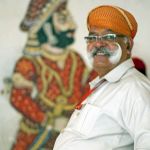 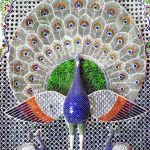 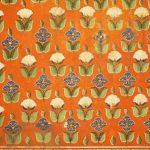 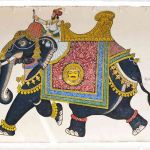 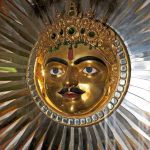 The multiple layers, levels, courtyards, rooms and passageways are an intriguing insight into the richness of royal life at the time.
Our, almost compulsory, boat ride on the lake gives an immunised view of the reality of modern Indian cities and transports you back to a time of elegance and privilege – and pleasure – such as with Jag Mandir, also known as the ‘Lake Garden Palace’ situated in the middle of Lake Pichola. Construction started in 1551, and the royal family used the palace as a summer resort and pleasure palace. 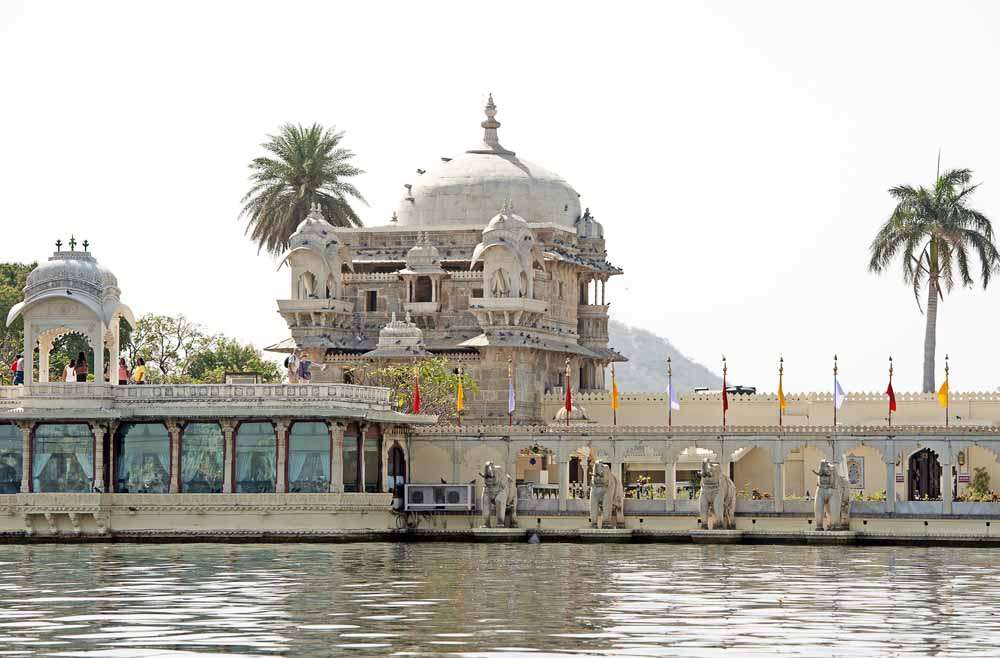 As if to belie this showcase of decadence, the lakes themselves are now forbidden to bathers; being little more than open septic tanks as no adequate city sewerage system exists – and although moves are currently in place to cleanse them, it does take the shine off the notion of staying here. 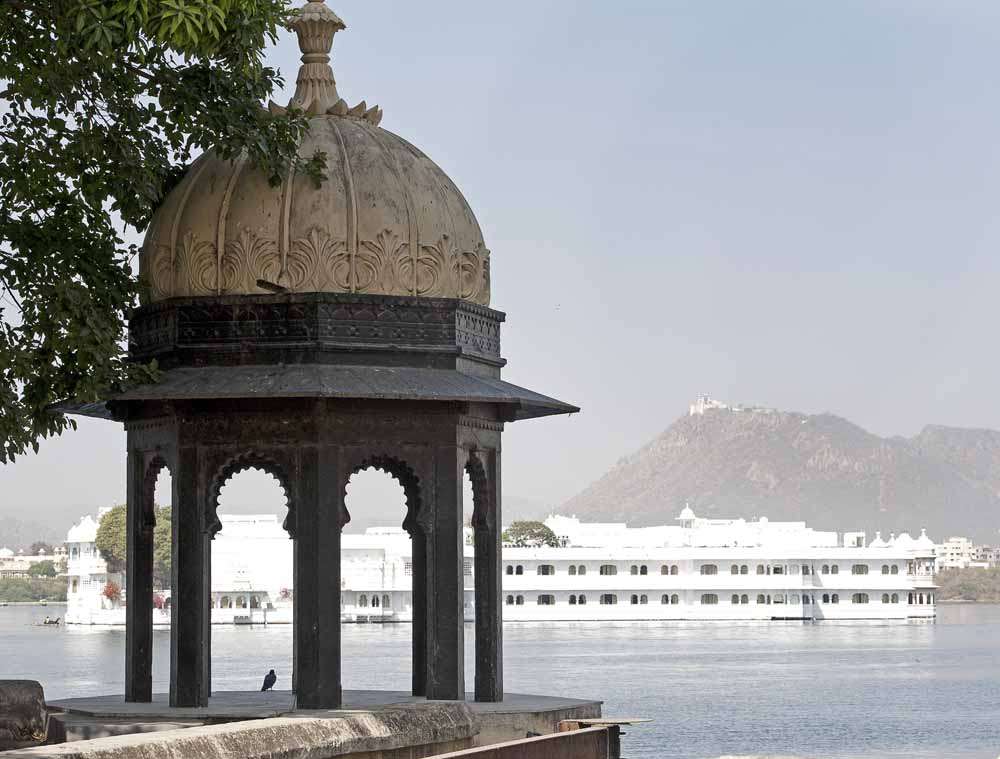 Whilst we’re keen to see as much of the city as possible and thereafter to retreat into the luxurious surroundings of our plush hotel – we’re venturing further afield from the obvious attractions of the Taj Lake Palace in the hopes of leaving the hustle and bustle of city sounds and smells way behind us by heading for the hills.
Fateh Garh is a virtually brand new heritage palace-hotel built from various component parts of an old family Haveli and a lot of investment into marble and well-planned space. The Monsoon Palace on an adjacent hill top to the north bestows the perception of heritage and permanence on Fateh Garh itself. 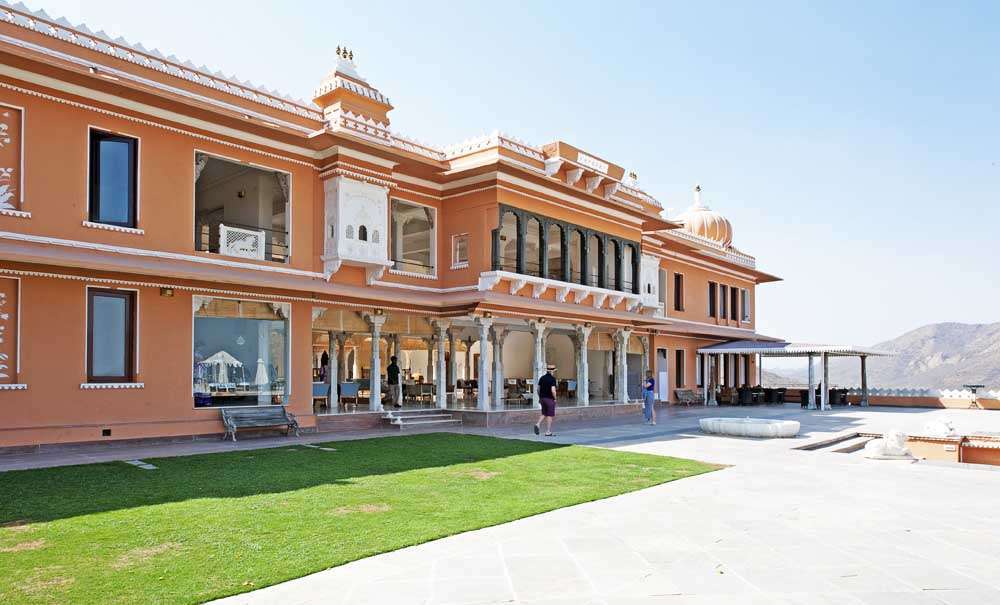 The hotel claims to be ‘a pioneer in sustainable, ethical and responsible tourism’ and constructed in ‘a vedic architectural style for balance and harmony of nature’s forces’. Whatever the ethos behind Fateh Garh the overall ambiance is impressive. There’s a perceptible ‘newness’ about the fabric of the building but the authentic old Haveli doorways and pillars lend a patina of authenticity and age that tips the scales between the brash and the bold. 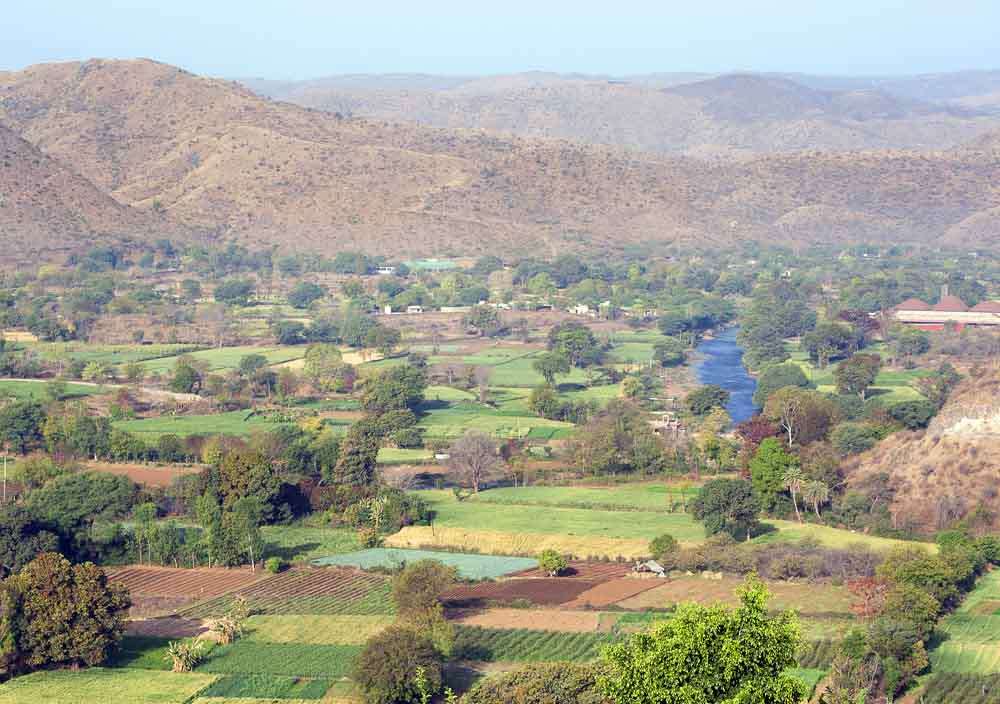 Beyond any doubt is Fateh Garh’s location, which is stunning. Laid out before you in all directions are scenes of rural life and city splendour – from the green patchwork of almost medieval cultivated fields surrounding the hillside to Udaipur’s lakes in the distance, all are bestowed with a magical hue as dusk falls and the distant lights of the city blend seamlessly with the sparkling canopy of stars above. 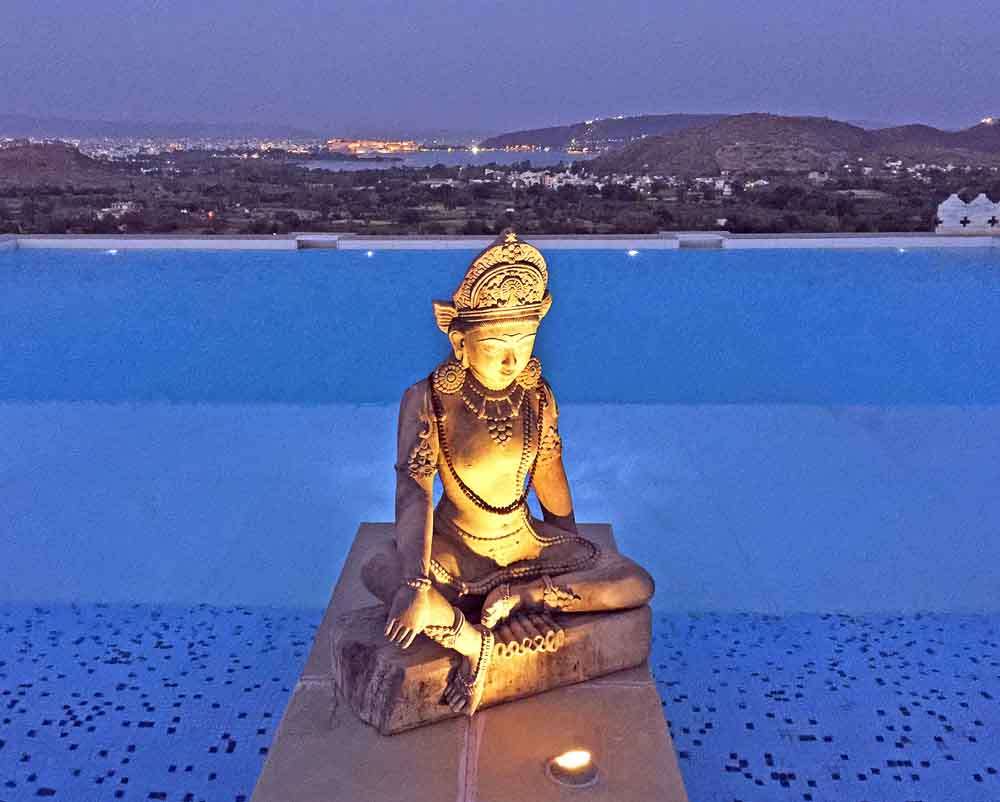 The hotel itself is a labyrinth of levels and courtyards that break up its massive scale and reveal different tableaux at every turn – from an overview of the owners’ pavilions with their vintage car collection, the swimming pools on two levels with broad marble connecting staircases, the huge reception with panoramic views of The Monsoon Palace and the various places in which to walk, dine or just relax and Fateh Garh has something for everyone. 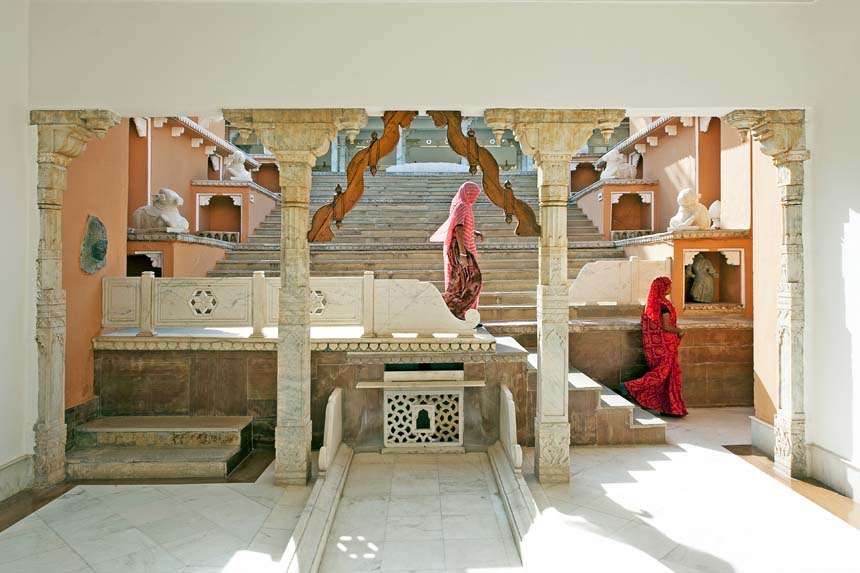 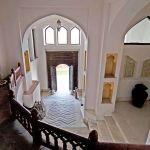 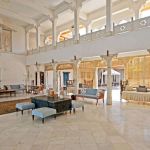 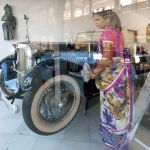 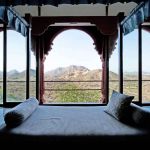 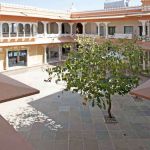 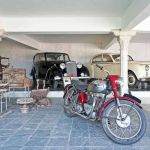 Strangely, the fact that the service standards are slightly ‘clunky’ adds a charm of its own, in that local people are trained to participate in the running of the hotel, with all the inadvertent and sometimes humorous fumbling of forks and phonetics; rather than being the clinical perfection we’ve come to expect in any other luxurious five star hotel.
Fateh Garh is a contrived but worthwhile addition to the rich options available for luxury accommodation in Udaipur and certainly offers an entirely different and intriguing perspective of the city.

It doesn’t directly compare with the Lake Palace for the simple reason that they’re chalk and cheese – but at a fraction of the cost of its more famous peer in the middle of Lake Pichola, Fateh Garh offers a very credible and creditable alternative.

So, if you fancy a lofty overview of Udaipur before you descend into its historic and busy centre, then Fateh Garh is an excellent luxury hideaway in the hills that’s well worth considering.

If you simply want more information about this wonderful heritage hotel then follow the link here – or why not ask us to arrange your own tailor-made travel to India – see below.

Let us plan your inspiring journey through India’s Golden Triangle