Shedding some light in the darkness…

Helsinki is among the world’s northernmost capitals and the lengthy winter, from November all the way up to March, is dark and freezing and must discourage all but those committed to business or depression.
The summer, however, is pleasant but extremely short, lasting from early June until late August, which gives the opportunity for a short weekend break. 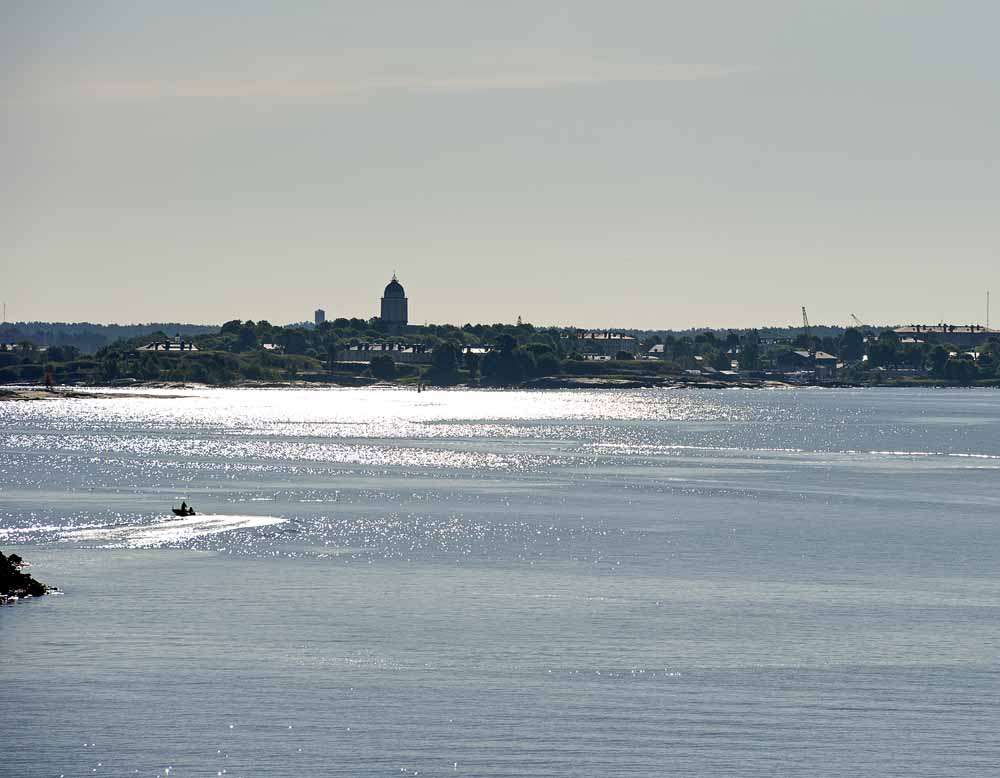 You can see the sights in a day and then delve deeper into history and museums if you’ve a mind to learn more. With temperature highs of around 24°C you’ll find strolling around quite pleasant and the pavement cafes filled with Finnish people who have come out of hibernation.
We were intent on getting a feel for the water bound city, set as it is on a peninsula in the Gulf of Finland, as we’d heard that in 1812 it had been rebuilt by the Tsars of Russia to reflect the architecture of St. Petersburg. 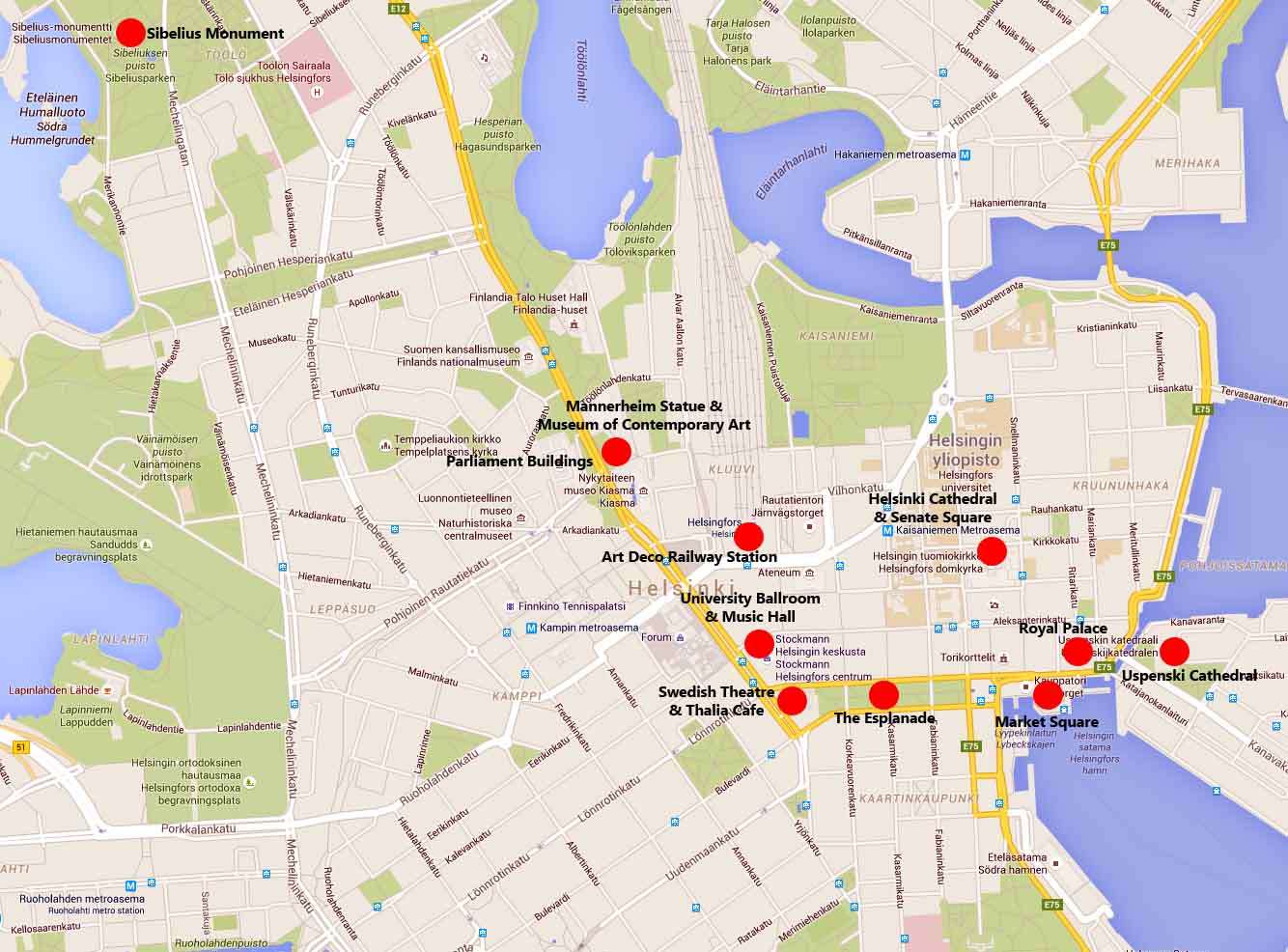 We’re not quite sure what happened but with limited exception, Helsinki has acquired the austere concrete persona that was obviously what made it a popular film set for ‘cold war’ movies. The city centre is pleasant but not remarkable and you have to seek out the more attractive buildings and sights rather than be spoiled for choice between them.
Starting in the centre – we walked the length of the Esplanadparken (Esplanade Park) which is a pleasant leafy walk between two main thoroughfares that lead to and from the waterfront and main market square. There seems to be a permanent ramshackle set of market stalls here offering little more than most markets the world over but the setting and surroundings are attractive. 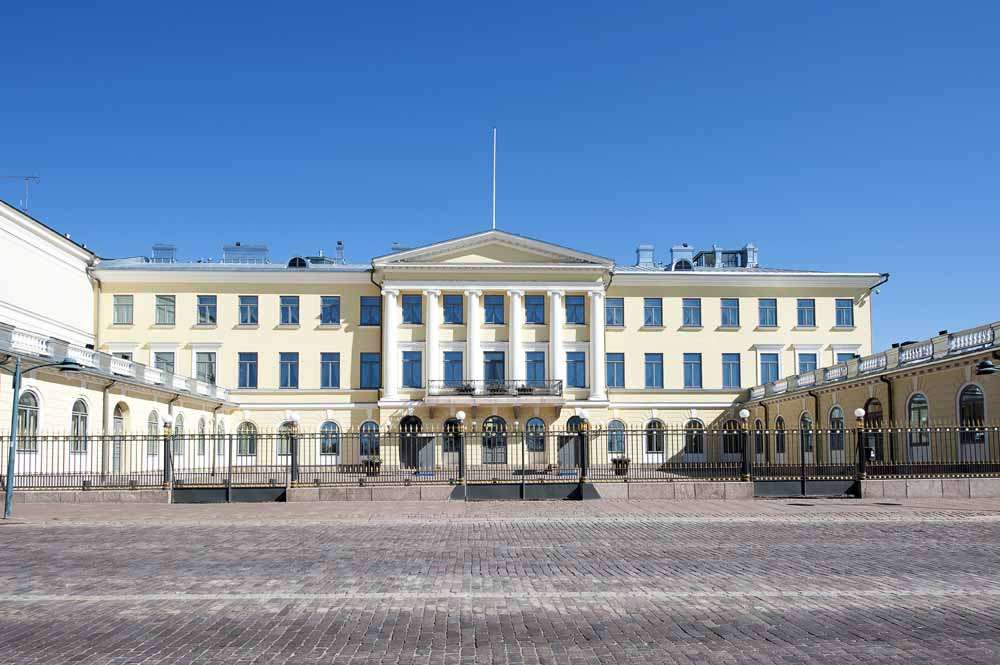 The City Hall is a building of some grandeur and sets off the waterfront, lending it a dignity and presence that continues as you continue to the yellow colour washed Presidential Palace and round the corner to cross the bridge to Uspenski Cathedral, which sitting dominantly on a hillside is the principal cathedral of the Finish Orthodox Church. 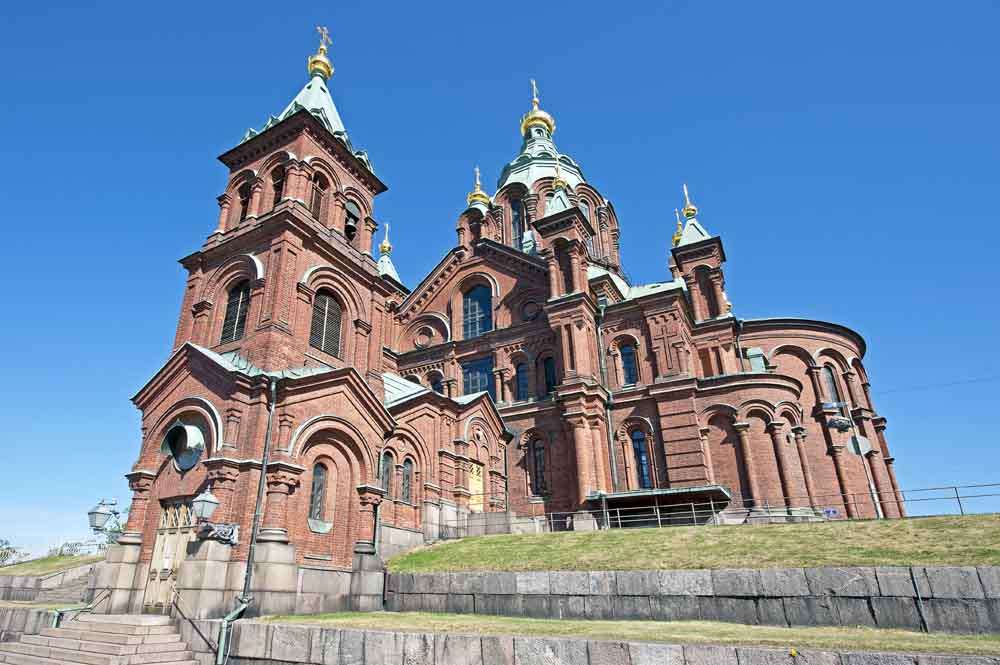 It’s free to enter and the interior is remarkable for its display of valuable icons, one of which was stolen in broad daylight in 2007 and is still sought after today. Another was stolen but recovered a year later. 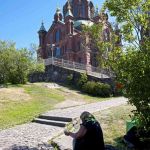 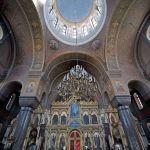 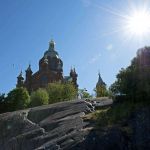 Designed by a Russian architect and built during Peter the Great’s sovereignty over the Grand Duchy of Finland at the time of its construction by 1868. A plaque adorns the rear façade to commemorate his patronage. 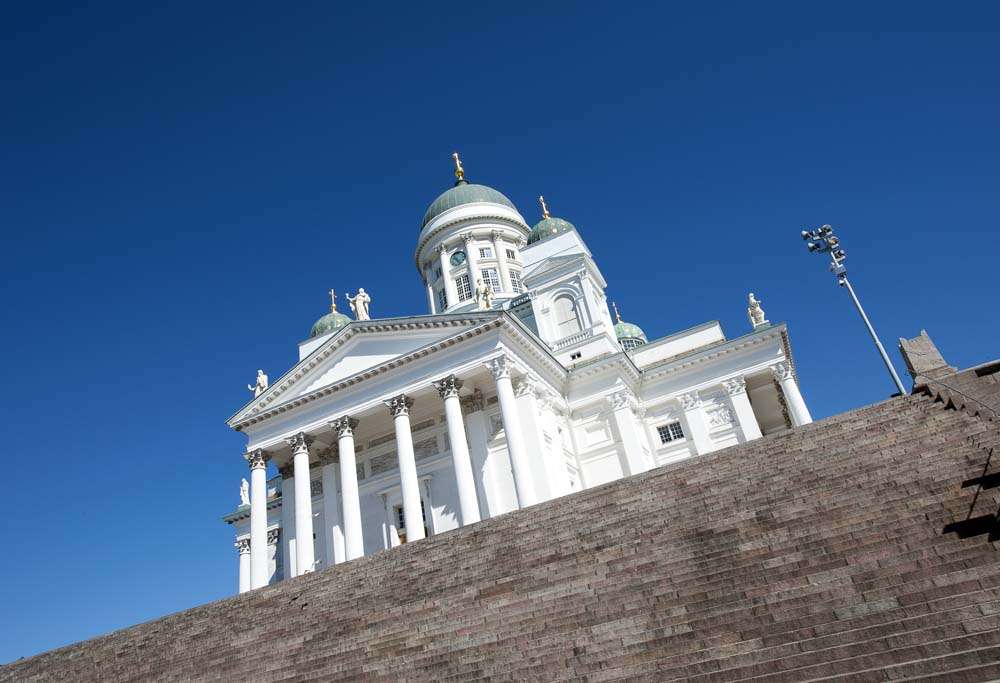 A short walk brings you to Senate Square as you dodge the quaint ancient and modern trams that crisscross the roadways throughout the city centre. This large area is the architect Carl Ludvig Engel’s lasting allegory of political, religious, scientific and commercial influence in surroundings that make up the oldest part of central Helsinki. 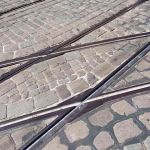 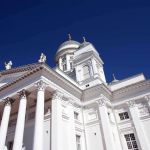 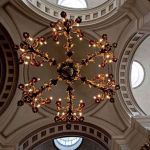 Dominated by the gleaming white Helsinki Cathedral, this area and the waterfront we’ve already described are really the most notable sights in Helsinki – a shame we didn’t realise this before tramping around the rest of the city! 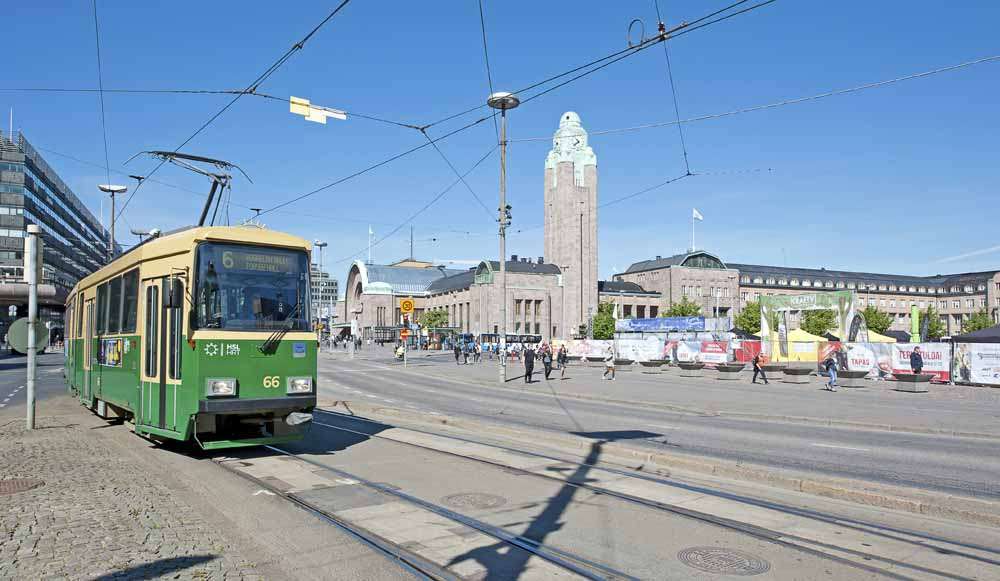 Gradually becoming more despondent by the brutalist architecture of office blocks and apartments, with a brief respite on seeing the Art Deco colossus of the Railway Station, 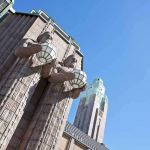 we made the pilgrimage to Sibelius’ ‘organ pipes’ memorial which after a pleasant walk along the lakeside gleamed in the sun in its parkland setting as tourists clambered in and around it making noise enough to make Sibelius turn in his grave – 40kms away in Ainola. 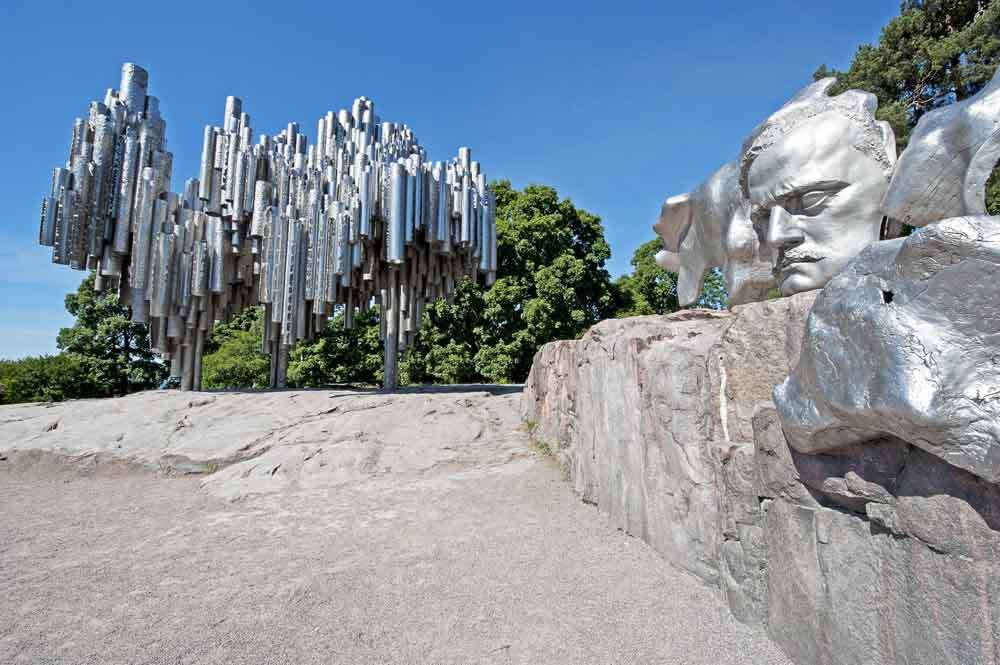 At about this time we became less enchanted with Helsinki and more focussed on something to eat.
Helsinki, well, Finland in general along with Sweden, is famous for its Cinnamon Buns – so it made sense to seek some out whilst covering what remained of the sights.
We trudged the featureless streets on our way back to the centre (Sibelius’ memorial is a good 40min walk out of the centre) we debated the wisdom of spending more than a weekend here – and It wasn’t until we arrived at the ‘rock church’ (Temppeliaukio Church; a Lutheran church in the Töölö neighbourhood), which whilst unusual isn’t stunning, that we found the perfect Cinnamon Buns. What a relief! 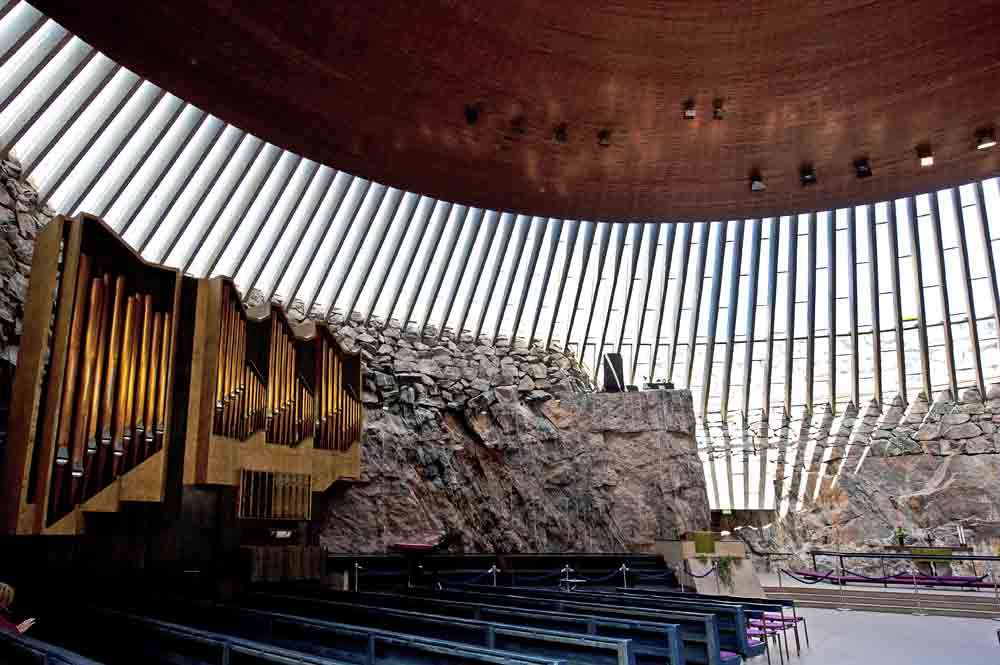 We’d read that Cinnamon buns, or Korvapuusti, the Finnish name of these delicious rolls also means ‘a slap on the ear’, which suggests that others have also been less than impressed with Helsinki’s sights.
Korvapuusti consists of a rolled sheet of yeast-leavened dough onto which a cinnamon and sugar mixture- and sometimes raisins and other ingredients – are sprinkled over a thin film of butter. The dough is then rolled, cut into individual portions, and baked or deep fried. 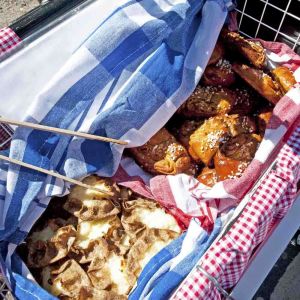 The size of a cinnamon roll varies from place to place, but many vendors supply both a smaller and a larger size. The largest variety can be up to 20 centimetres (8 in) in diameter and weighing approx.. 200 grams (7oz).
Our find was a young lad who enterprisingly had arisen at the crack of dawn to make his and was now selling his still warm buns from the front basket of his bicycle – so much nicer than the factory produced shop bought confections. 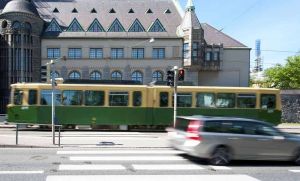 With good humour restored we felt ready to continue our return to the centre, passing and pausing briefly at the Parliament buildings and Museum of Contemporary Art with its equestrian Mannerheim statue (Carl Gustaf Emil Mannerheim being inextricably linked with Finland’s history – from Tsarist rule, ‘Red’ and ‘White’ civil war and the machinations of the 2nd WW which eventually brought it independence). 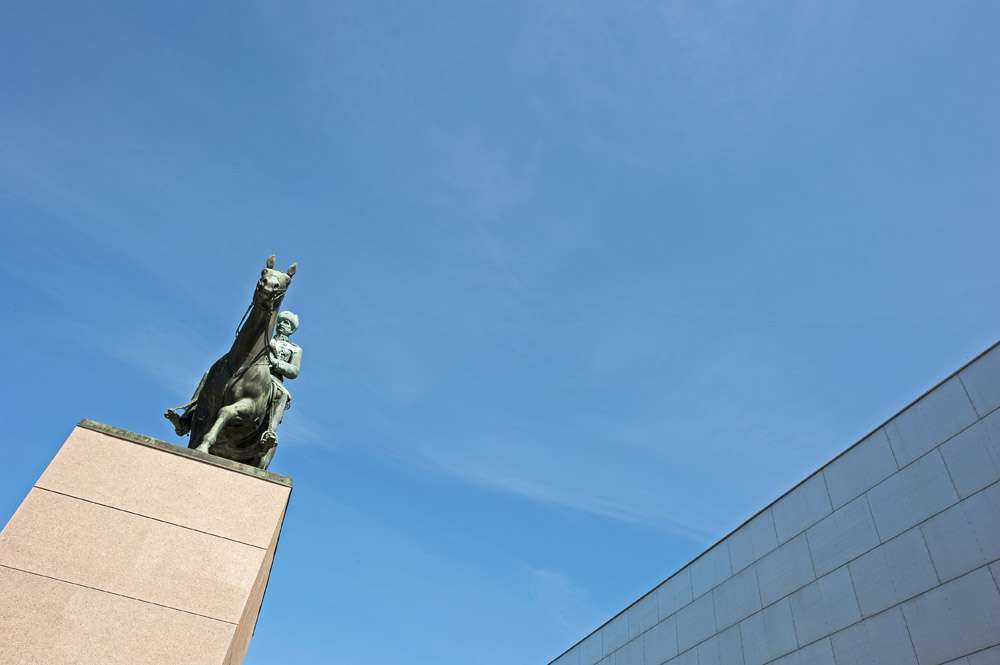 We strolled past the ornate University Ballroom and Music Hall before finally taking the weight off at the delightful Swedish Theatre – Thalia Café on Pohjoisesplanadi at the corner of Mannerheimintie for a self-service coffee at the pavement tables whilst we reflected on our tour. 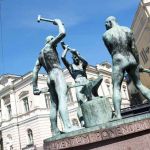 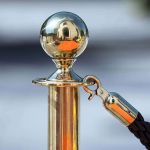 Who would we recommend Helsinki to?
It’s undoubtedly a clean and cosmopolitan city and ideal for a weekend break if you’re with a loved one who you’re still totally immersed in – then you could come in winter when the total darkness would confine you to nocturnal pursuits – or perhaps in summer wandering hand-in-hand along the waterfront and in the parks during the extended daylight hours.
Otherwise, in our opinion, it’s a long way to travel for a Cinnamon Bun!

If you do venture to Helsinki you’ll inevitably have a reason for being there other than simply sightseeing. The centre is ideal for shopping but limited in terms of ongoing entertainment, as we’ve suggested.

However, our one stop for light refreshment was pleasant and we’re happy to recommend Thalia. They don’t appear to have a website but the link to their Facebook profile is below.