Aalborg – a puzzle of pictures

This thriving little town at the narrowest point of the Limfjord that cuts through Jutland, Denmark, is a real puzzle.

It’s not easy to summarise this colourful city, as it seems to have been made out of three different puzzles with their pieces randomly fitted together to form just one picture.
As the European Commission concluded that the citizens of Aalborg are the most satisfied people with their city in Europe, then this amalgam must be working. 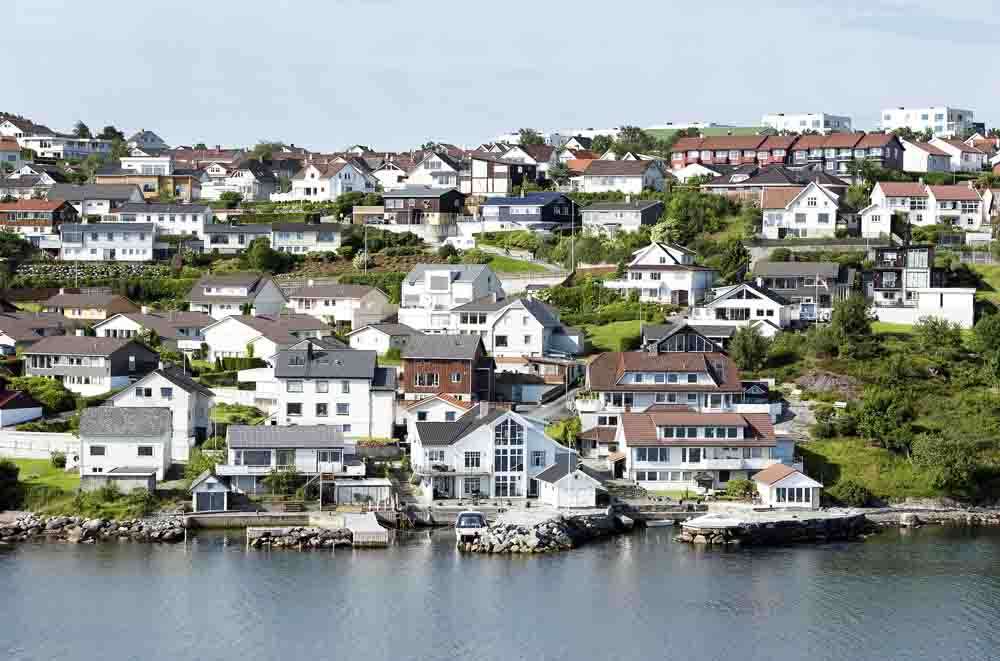 Aalborg is a city in transition, hence the confusing mix of industry, history and culture that greets us at every turn as we walk through the colourful streets.
Born out of a thousand year history, starting as a Viking port, through to its working class background revolving around cement works and oil exploration, it now thrives as one of Denmark’s best known university and cultural centres. 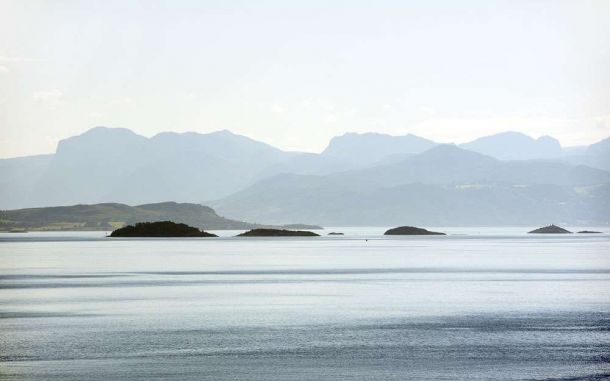 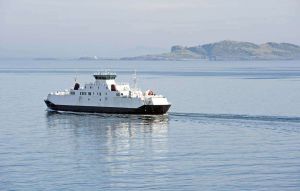 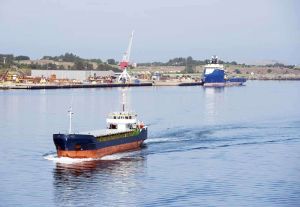 Architecturally, this has resulted in the interlocked and diverse puzzle pieces from three pictures; such that there isn’t a well–defined historic quarter, industrial centre and cultural hub but we seem to trip between pockets of each that fit together in a haphazard fashion. 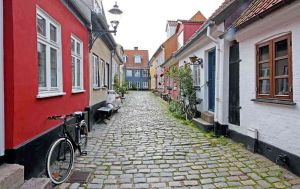 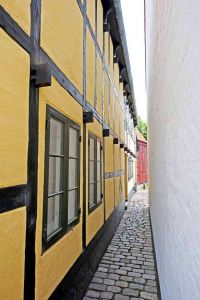 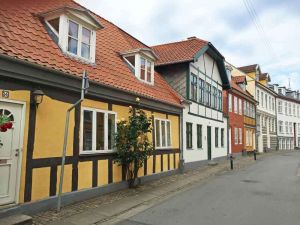 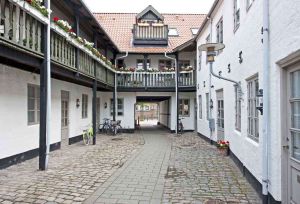 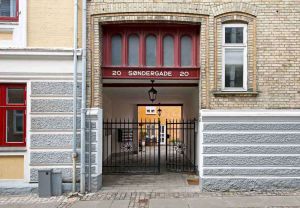 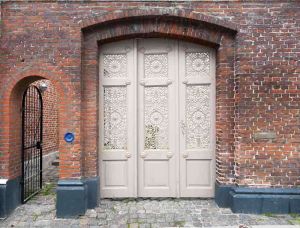 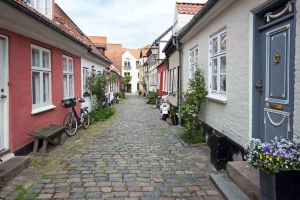 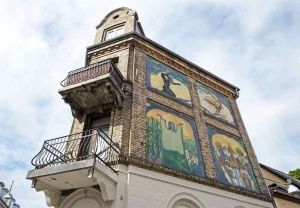 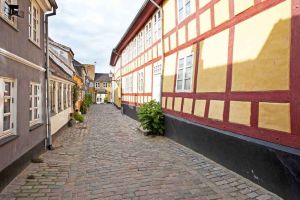 This disconnect is at first unsettling but the chance of stumbling across a half-timbered gem; a leafy, cottage–lined lane; oil exploration vessel, historic landmark or modern shopping mall, all adds to the mystery of Aalborg, such that there’s never a dull moment within its embrace.

The revitalised waterfront also provides a spectrum of traffic from enormous cruise ships, to working barges and pleasure cruisers – all adding to the serendipity of sights that Aalborg offers up.

Thankfully, things have moved on since the 16th and 17th centuries when two thirds of Denmark’s income came from charging a levy on all ships entering or leaving the Baltic; especially as they no longer sink those that don’t pay! 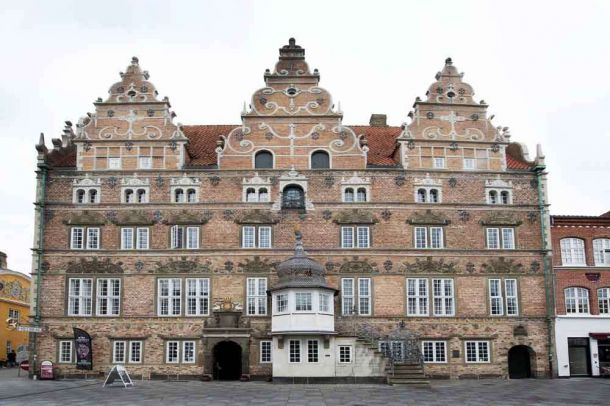 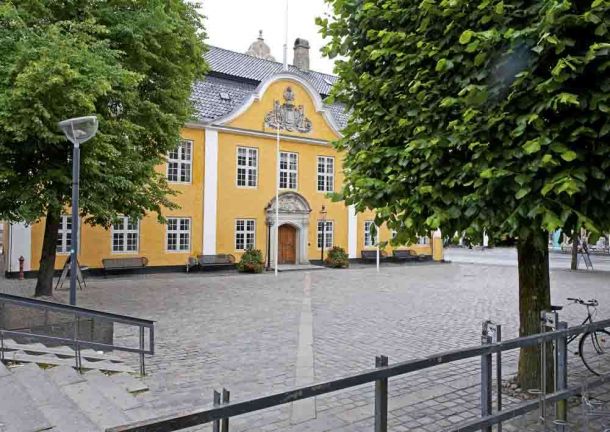 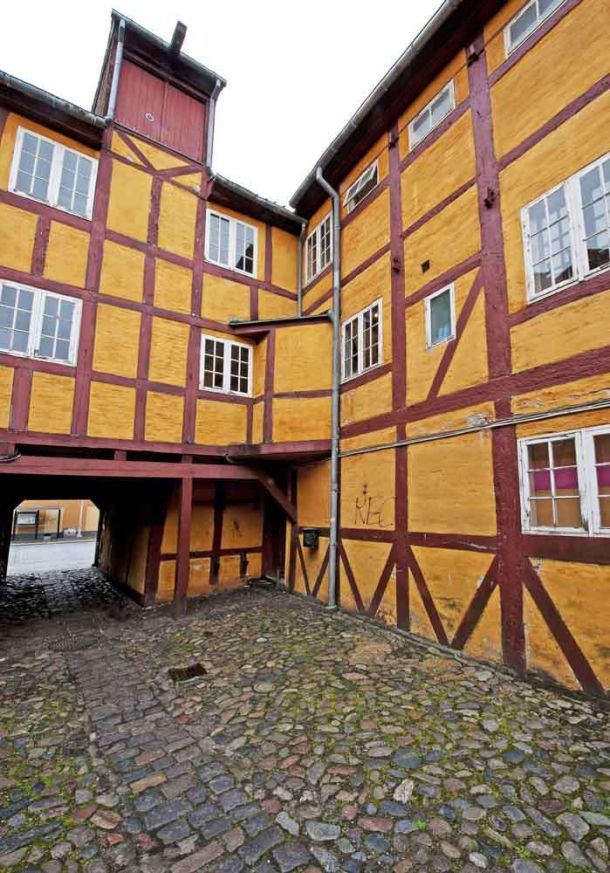 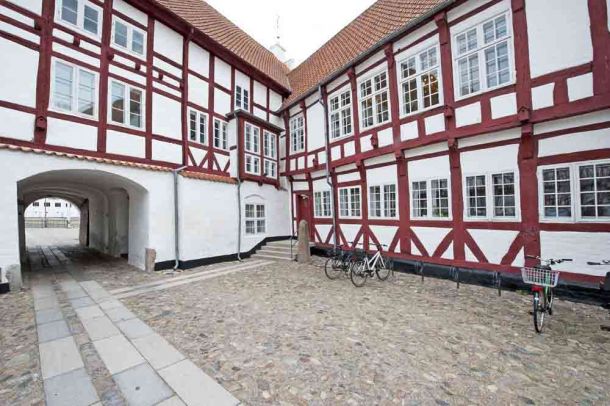 Its hard to miss several significant buildings around the centre, such as Jens Bangs House – one of the best remaining examples of 17th century domestic architecture; Jørgen Olufsen’s House, a well-preserved merchant’s mansion; King Christian’s 16th century half-timbered Aalborghus Castle; or the 18th century old city hall – all chart the architectural progress and evolution of this historic area whilst standing shoulder to shoulder with the modern, currently less significant buildings of today. 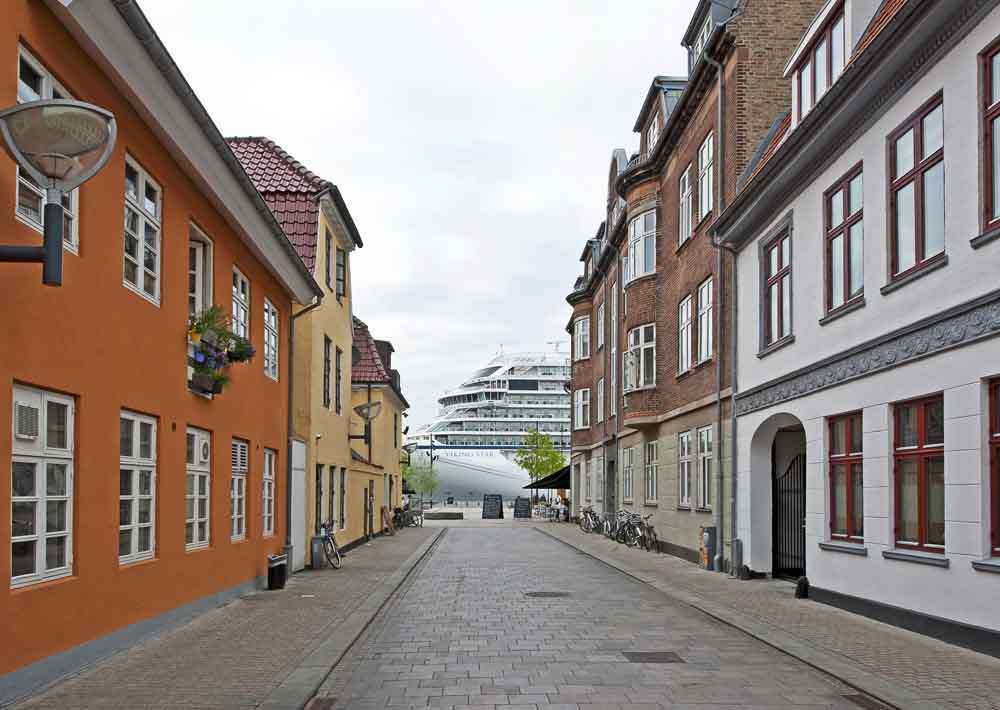 This visual juxtaposition of static and dynamic, old and new, epitomises Aalborg’s character.

In following our map between these locations, we can’t help but be presented with the many faces of Aalborg but nevertheless it comes as a surprise to find a cruise ship blocking the end of a pretty paved road; as if it’s just another part of the disparate Aalborg puzzle, where historic architecture coexists with modern high-rise apartment block. 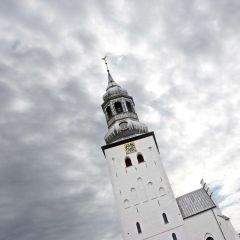 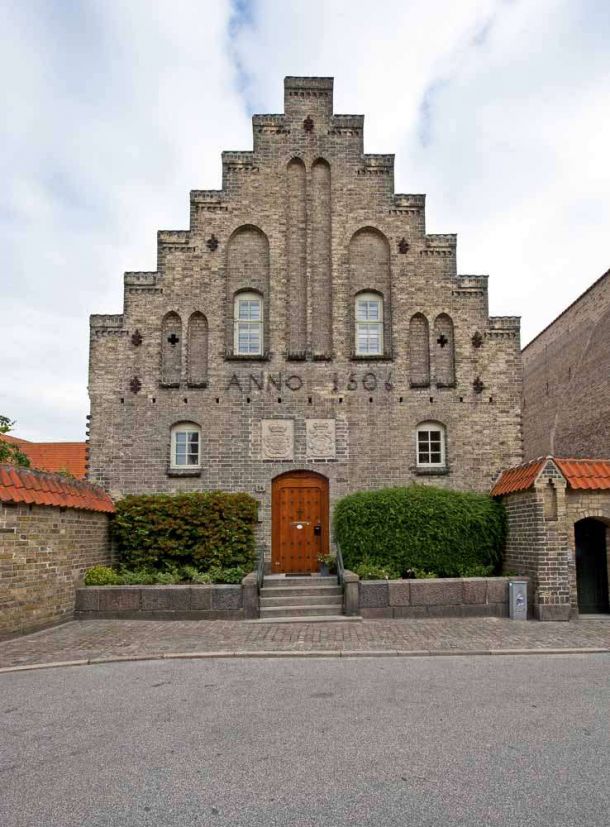 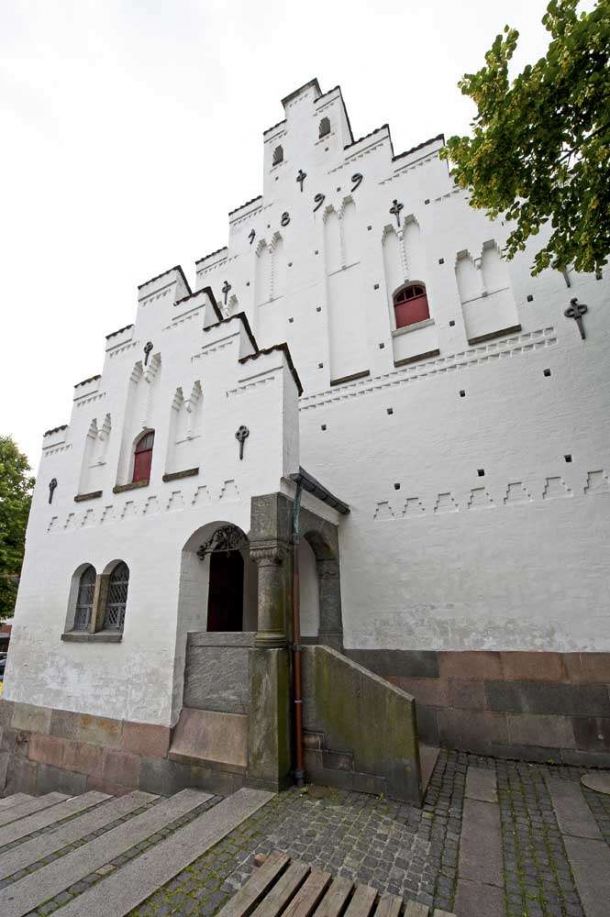 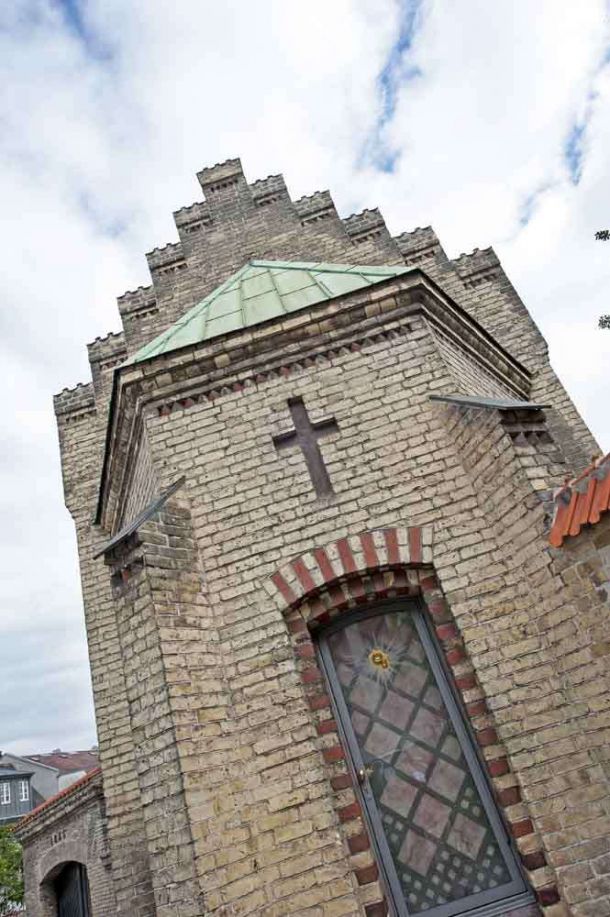 There’s a fair smattering of religious places to visit, if you’re inclined, from cathedrals and churches to the Hospital of the Holy Ghost, most of which are reflections of the christian Lutheran faith.

Aalborg is one of the few locations in Denmark showing an increase in tourist numbers year-on-year and the close proximity of a regional airport adds to overall accessibility. This together with its easy train, road and sea links make it a straightforward place to visit.

We don’t think we’d ever recommend Aalborg as a stand-alone destination but rather an intriguing stop over or transit location within any tour of Denmark. 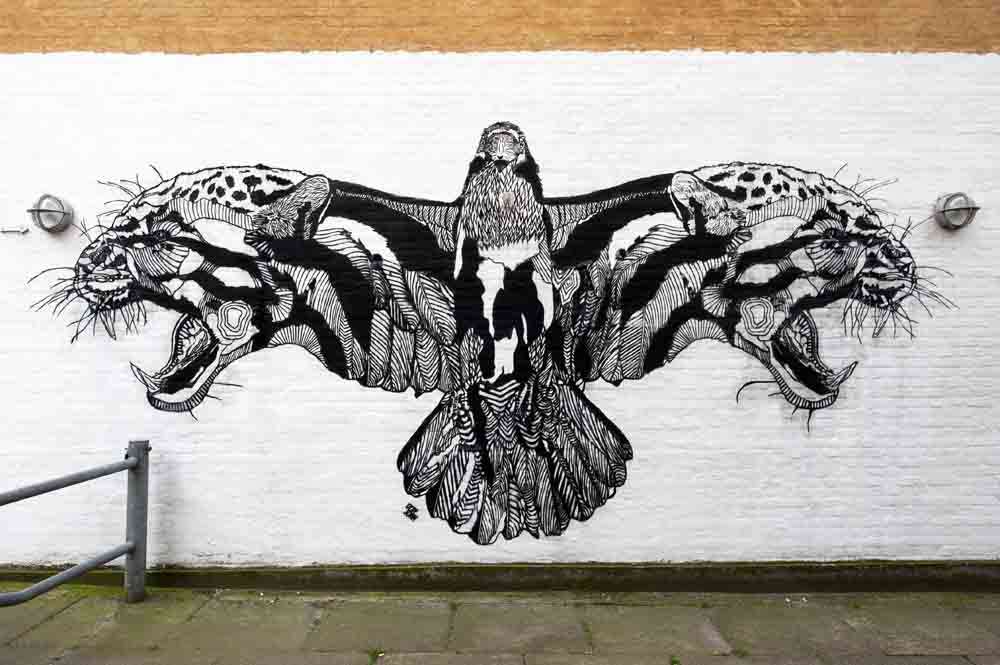 Even the wall art reflects the disparate mixed personalities of Aalborg

That said, if you are a follower of the Arts then the concert hall, opera and symphony orchestra, together with the largest festival in Scandinavia, The Aalborg Carnival at the end of May each year, make the city a truly cultural hub worthy of anyone’s attention.
For whatever reason you visit, we think you’ll be similarly puzzled by the persona it presents.

A couple of useful links for anyone thinking of exploring the puzzle of Aalborg.