A matched pair in the Loire

Home » Europe » A matched pair in the Loire

Take a pair of older cars – and their owners – head south through France and discover a matched pair of restaurant and chambre d’hôtes that are ‘off the beaten track’ within the Loire valley.

We’d stuck a pin in the map, at roughly a three-hour drive headed south from Cherbourg and then asked Google where the best restaurant was for lunch.
As the older of the cars is a 1966 Austin Healey 3000, he’s designated to lead the way and set the pace. We’ve also chosen to stick to the minor ‘D’ roads, so that we can enjoy French countryside, not wall-to-wall lorries on the autoroute. 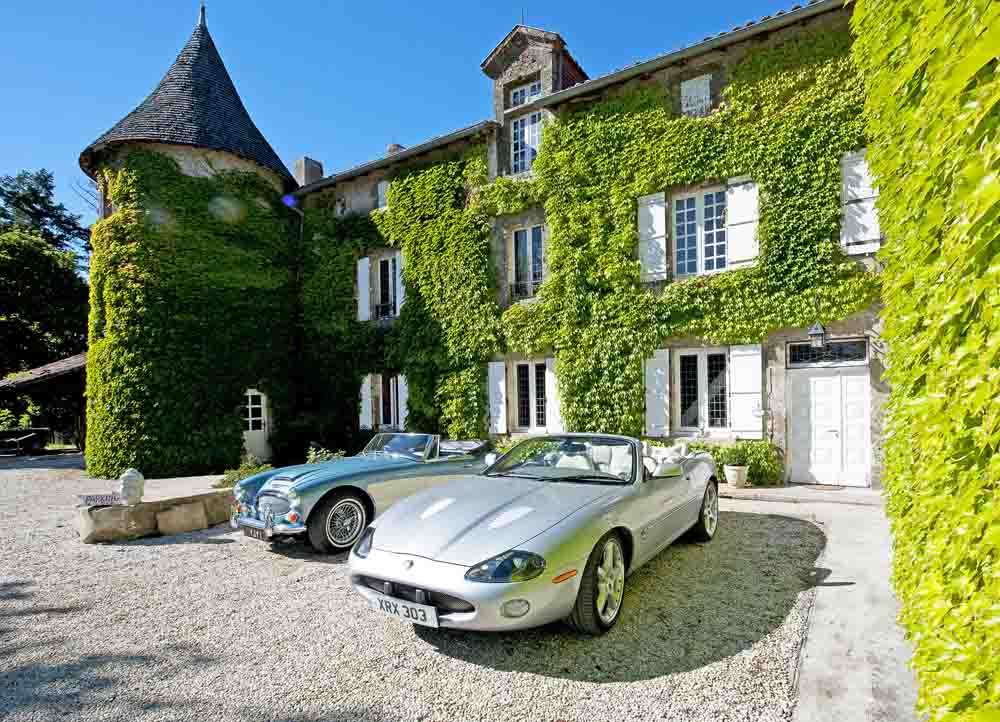 No sooner have we left Cherbourg than we’re being ‘shot at’ by the Healey’s exhaust. A final sheet of flame from the tailpipe finds the Healey peeling off to the side of the road. To cut an hour’s story short, our friend has fortunately carried a spare set of electronic ignition and with a big sigh of relief we set off again – the trip hasn’t been scuppered in the first 30mins after all! 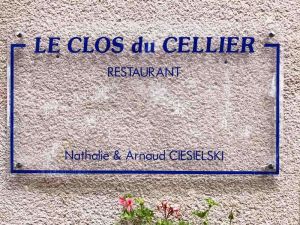 We’ve booked our lunch stop online direct with the owners of a restaurant called Le Clos du Cellier and after some initial confusion, when they confirm the wrong date, we’re all set to arrive at 1330 for lunch. The restaurant has appealed because of its own little ‘cave’, or selection of local wines.

There is little more planning of our journey other than this and after our initial hiccup and short delay we find ourselves cruising down the D178, roof down, with the sun shining on us and a feeling of all being well with the world.

The Healey cruises at about 55-60 mph, which means that our old Jaguar is virtually on tick-over. We’ll later discover that we’ll use less fuel in the ten days of cruising in France than at any other time during our ownership of the car.

The beauty of our ‘pin in the map’ approach to lunch planning is that we have no idea what we were going to arrive at or, beyond the internet comments, what our meal and the service will be like. 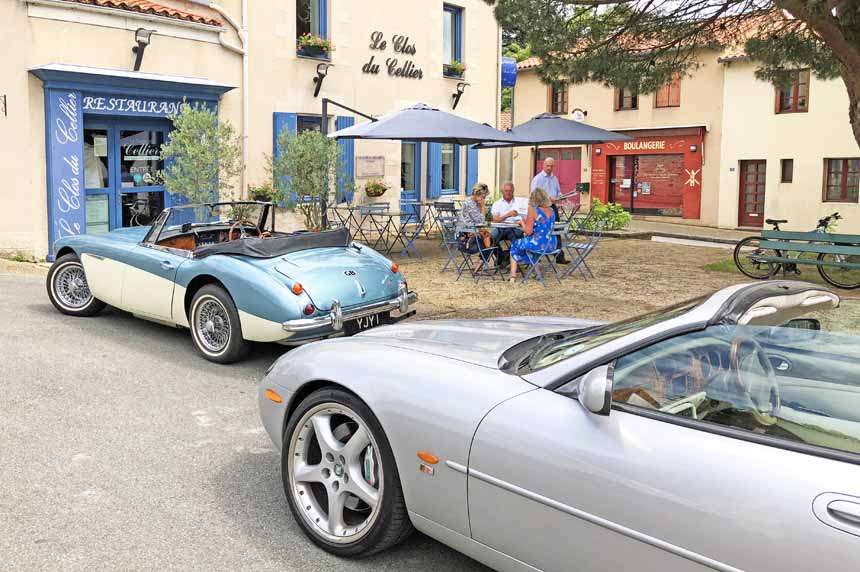 Our very first impression isn’t overwhelming. We enter the pretty but otherwise nondescript little town of Le Cellier and meander through the streets until coming to a junction. Le Clos du Cellier sits on the junction and looks initially like a typical French café without a great deal of ‘kerb appeal’. There’s a paved and gravel area outside with a few empty tables and a single entrance door set into the rather blank wall of an old nineteenth century stone building. Is it even open?

Resisting the urge to simply drive on, our friend in the Healey makes a bit of a fist of parking outside – to the extent that someone, who we later discover is Le Patron, Arnaud, comes out to direct the car and to protect his one large pot plant that stands on the pavement. 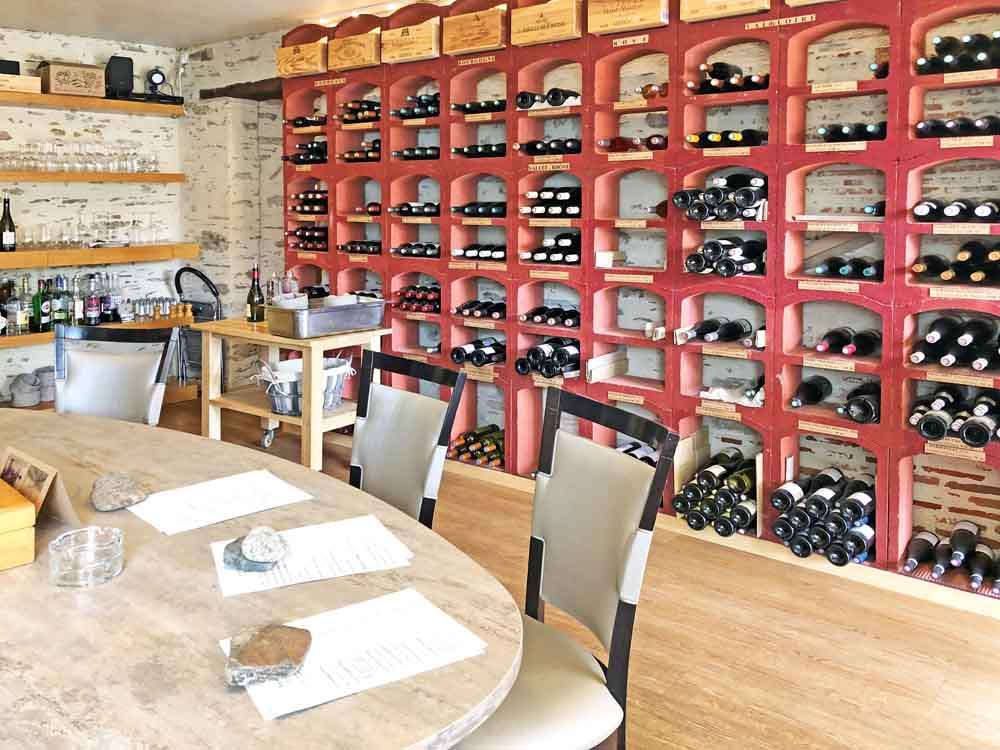 Having settled the cars outside the restaurant we take a peek inside. Our friend’s eyes light up as he spies the wall of wines just inside and although the restaurant is quite sizeable and nicely presented, we elect to sit outside in the sun for lunch. 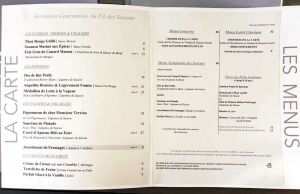 We each have a small ‘safe arrival’ beer while we look at the menus that Arnaud supplies at our table in the shade of a large pine tree. Arnaud is no fool and soon realises that we’re bon viveurs who are simply here to enjoy ourselves and don’t really want to agonise over a menu.

He senses that we’re immediately going ‘off piste’ as we debate over the set menu choices and suggests that he just bring us a couple of starters to share between us, followed by steak – with the rest left for him to conjure up. We’re more than happy to acquiesce and sit back to enjoy the sun. 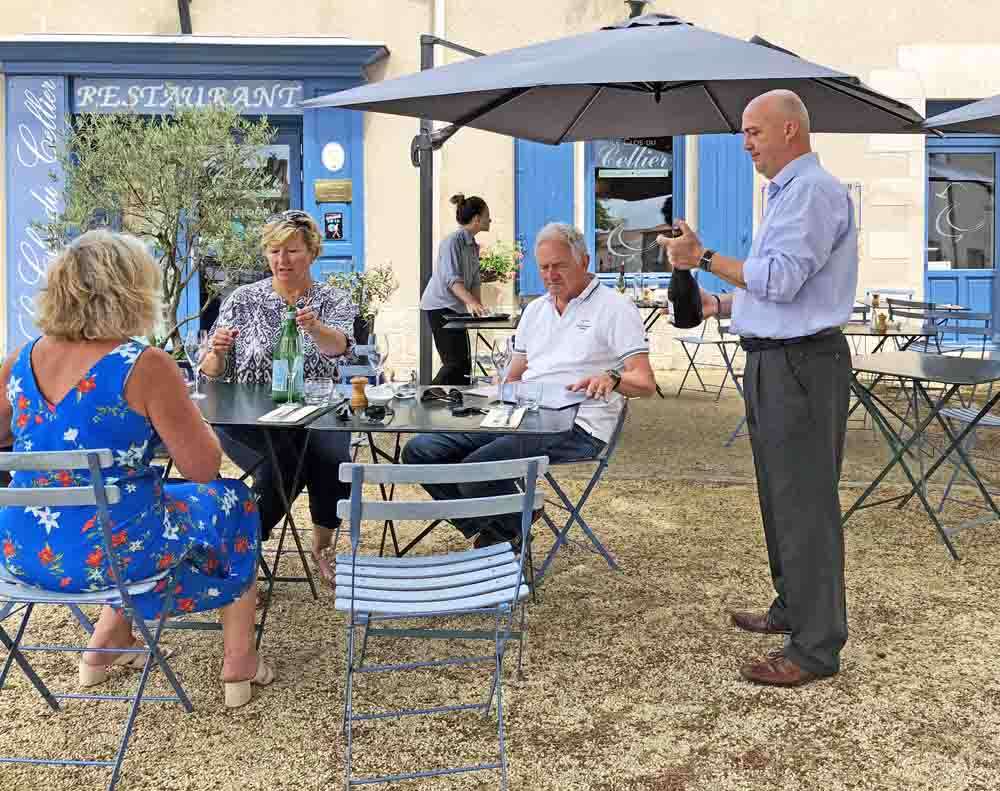 A little ‘amuse bouche’ arrives, along with a local wine that Arnaud has suggested, swiftly followed by a couple of local terrine to share. We’re so hungry and they’re so  delicious that I forget to take a picture and they’re gone before I remember. 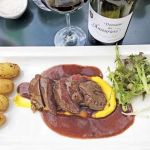 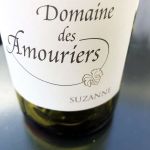 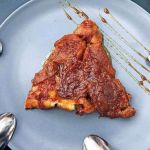 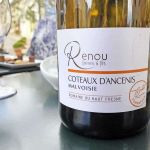 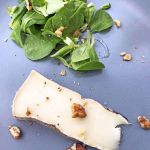 Next follows a beautifully tender piece of steak, sliced and cooked blue to our liking, settled in delicious sauces with a discrete accompaniment of potatoes and salad.

Again, we’re brought a wine to accompany the meal and conversation dwindles around the table as we enjoy every mouthful.

Sometime later, Arnaud simply brings both a generous piece of homemade tarte tartin and a plate of cheese – somehow sensing that we’d never decide for ourselves – so we each sample both to the accompaniment of yet another glass of appropriate wine that owes more to a soft blush rosé than a too-sweet desert wine. 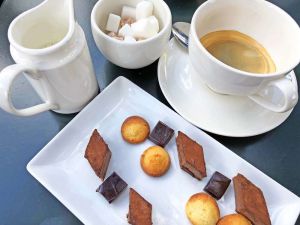 Coffee partnered with a tray of delicate homemade sweets arrives before Arnaud invites us inside to investigate the rest of his establishment.

It ranges from his wine clad entrance dining/lobby to the light and airy exposed creamy stone-built main dining rooms and his upstairs high-vaulted group or family room.

He also introduces us to his charming wife, Nathalie, who has been working wonders with our meal behind the scenes. 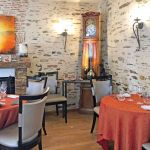 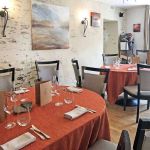 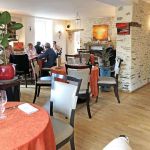 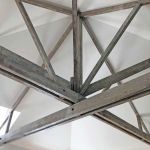 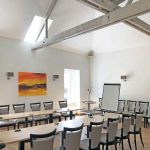 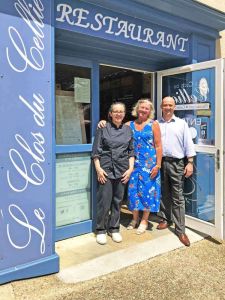 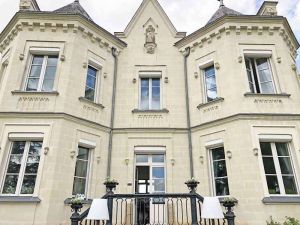 We spend a while chatting to this amiable couple before Arnaud decides that we really ought to visit his friend’s chambre d’hôtes which is close by – no doubt hoping that we might stay for the night and return for dinner!

He hops into his own car and leads us in convoy around the village until we squeeze down a narrow lane to the grand entrance gates of an impressive maison de maître – Villa Belle Couronne.

We meet Jan Liebreks, the Dutch owner of this impressive house that overlooks the Loire vineyards, with the river in the distance.

He takes delight in showing us all over his property, from the pool outside to the two beautifully appointed bedrooms within and the two self-contained chalet/gites in the grounds. 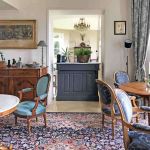 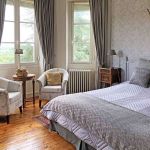 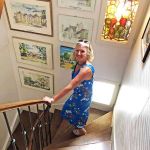 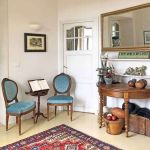 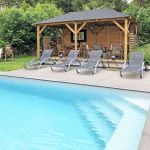 The property is an old ‘gentleman’s residence’, or mansion of the nouveau riche, who established themselves after the revolution; now lovingly restored throughout. 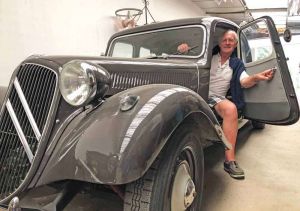 I get sidetracked in the garage beneath one of the gites that contains one of my all-time favourite cars – a Citroen Traction Avant – the ‘Maigret’ car.

I suggest to Jan that he’s lost my attention now and he remarks that I can stop over in the car if I wish!

It’s not until we leave Villa Belle Couronne and try to find our way south that we (somewhat uncharitably, perhaps) laughingly consider why Arnaud has been so helpful, welcoming and hospitable – not only in looking after us at lunch but also in introducing us to his friend Jan.

We know that Arnaud and his wife are the very best of hosts anyway but Le Cellier, the village, lies between two of the major bridges that cross the Loire at Nantes and Angers that enable travelers to head quickly north/south. Because of its relative isolation, Le Cellier therefore suffers, or enjoys (depending on your perspective) little through traffic. 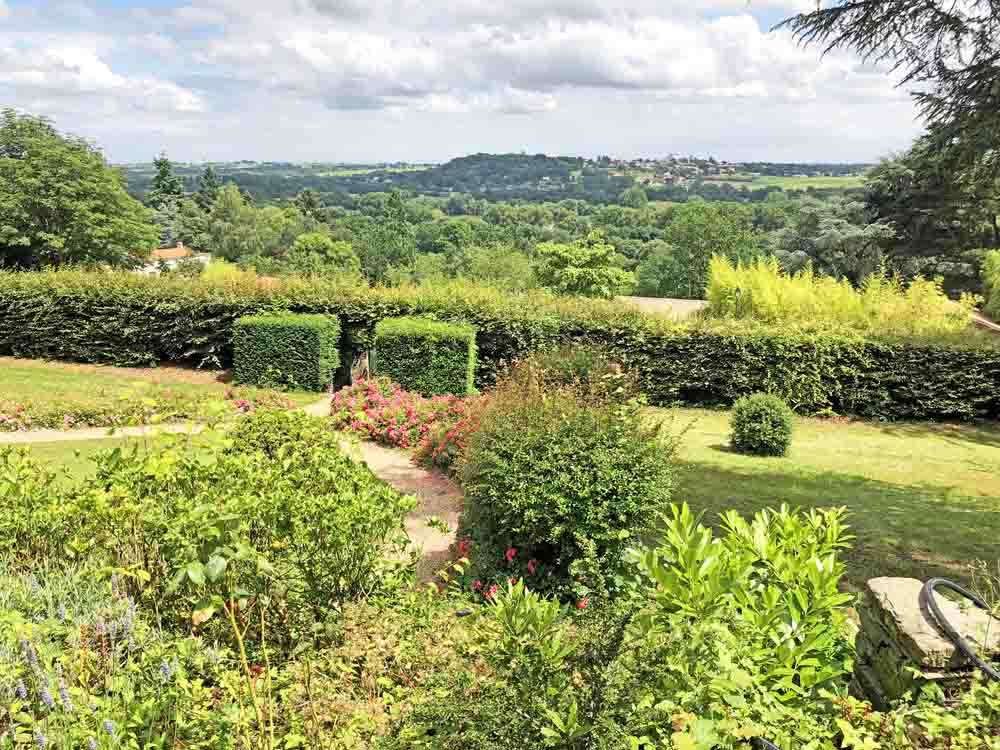 The view across the Loire valley from Villa Belle Couronne

Unless you have a very loose schedule, as do we, you’re more likely to be heading somewhere more significant and could easily bypass, or be totally unaware of Le Cellier.

We can highly recommend them, you won’t be disappointed!

Why not check out Le Clos du Cellier and Villa Belle Couronne websites – we’re sure you’ll agree they’re worth making a special detour for when next in France: