Get lost in Ostuni

Home » Europe » Get lost in Ostuni

Its perhaps no coincidence that Ostuni, ‘La Città Bianca’, sits in Puglia, deep in the heel of Italy; only a fighting ship’s paddle away from the Greeks, who were some of the first conquerors of this area – swiftly followed by a host of occupiers from the Romans, Ostrogoths, Longobards, Normans and Bourbons to name but a few.

Each has left their mark but none more so than the Greeks with their hilltop fortress of white-light architecture. 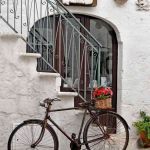 Originally painted white to lighten the labyrinthine maze of desperately narrow medieval alleyways and winding, climbing passages, the white took on a more practical application in helping to eradicate the effects of plague that scoured the city in the 17th Century. 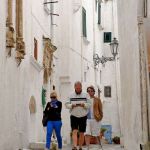 Often voted one of Italy’s most beautiful villages the strong defensive walls and white-washed houses jostle for position as they tumble and wind around the hillside, overseen with a superior air by the magnificent Gothic Ostuni cathedral, which sits atop this confusion. 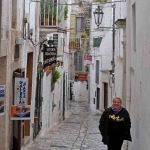 The town’s largest buildings are monuments in their own right. As well as the Cathedral, the Bishop’s Palace, together with a number of palazzi of local aristocratic families provide useful landmarks as you happily lose yourself in the web of streets that connect them.
Herein lays the charm of Ostuni; a fact not lost on the quite high resident population of British and German ex-pats who live here. That said, if you avoid July and August it’s easy to get wonderfully lost in Ostuni and to enjoy the warmth and tranquillity of both your surroundings and the local residents. 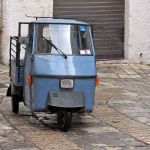 If you keep ascending, then the narrow back streets, little passages and flights of steps eventually meander to the highest part of town, home to the imposing Archbishop’s palace, whilst the Piazzetta Cattedral and Loggia set the scene for your successful ascent of Ostuni. 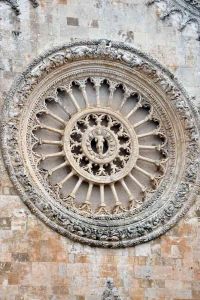 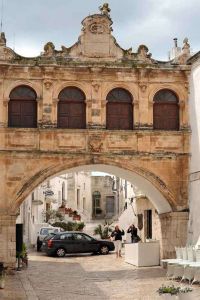 The highlight at the summit is the 15th century Concattedrale with its curvaceous, symmetrical façade and rose window.

This magnificent window is particularly notable as it symbolizes the Cristo Sole and is formed by three concentric circles, 24 finely crafted beams, 12 concentric arches bedecked with floral motifs and figurines of the twelve apostles.

At the centre, surrounded by seven cherubs, is Cristo Sole, master of the universe.

If you really must be in Ostuni in August then time it for the Cavalcata di Sant’Oronzo, which takes place between the 24th-27th August. A celebration of the town’s patron saint, it culminates on the penultimate day in a knightly, costumed procession on horseback.

There are numerous festivals in Ostuni, mostly of a religious nature, but food and music lovers will find much to enjoy with fireworks, parades and plenty of opportunities for dining. The Sagra dei Vecchi Tempi, especially for food lovers, offers visitors the chance to try some of the area’s most traditional dishes. 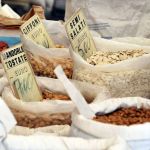 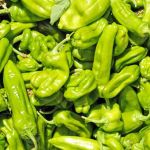 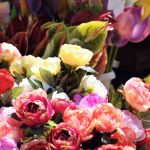 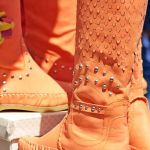 More esoteric festivals, such as the Buskers Festival on the 6th and 7th September, ensure that whenever you’re in Ostuni there’s something to keep you occupied and the craft market on the second Sunday of each month gives you another excuse to explore the region’s offerings. 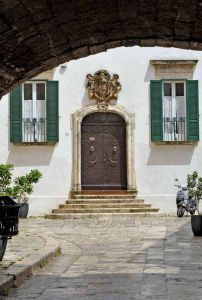 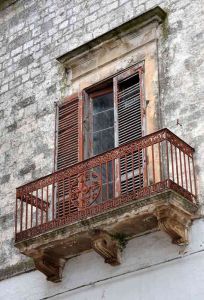 Puglia hasn’t suffered from the mass influx of tourism that Tuscany has ‘endured’ over the last few years but people catch on quickly to little havens of charm and tranquility that soon skews the ambiance of any place.

We’ve found one of the nicest ways to enjoy and absorb the area is to take a villa with friends, so that you’re not part of the mad rush to ‘see Italy’ but can take time to absorb the ambiance of the area, mingle with the locals and explore some of the more interesting elements of this wonderful area.

Villas in Puglia come in all sizes and prices, for any number of people and with facilities to suit the energetic or sedentary.

Just getting to know some of the local people, a little, adds a dimension so often missed when just ‘passing through’ and in some ways helps to endear you a little more than at the superficial level of the tourist pound. 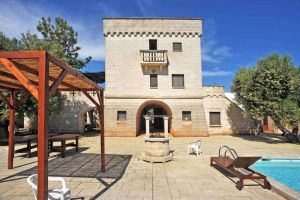 Villas are good for the local economy! 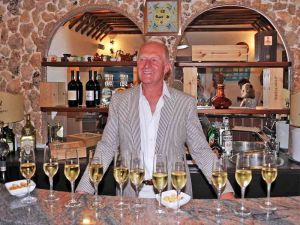 Ostuni still retains its character; so if you happen to be heading to southern Italy any time soon, take a little time to enjoy Ostuni for what it currently is – before the ‘White City’ changes colour.