A day out in Delhi

It’s well worth driving around the principal sights and sites of Delhi to get an impression of how the architecture – and country – has evolved over the centuries.

Each of the significant invaders and occupiers of India is well represented across the capital and many of the sites are worth at least a drive by rather than an in-depth investigation, unless you’re an historian or architect.

It’s too easy just to chill out after your flight in preparation for a tour around India but by following our suggestions you can pleasantly occupy much of a day – with a stop for lunch in the meantime.

We’ve mentioned those, where in our opinion, a slow drive-by might be favourable to greater investigation on foot. 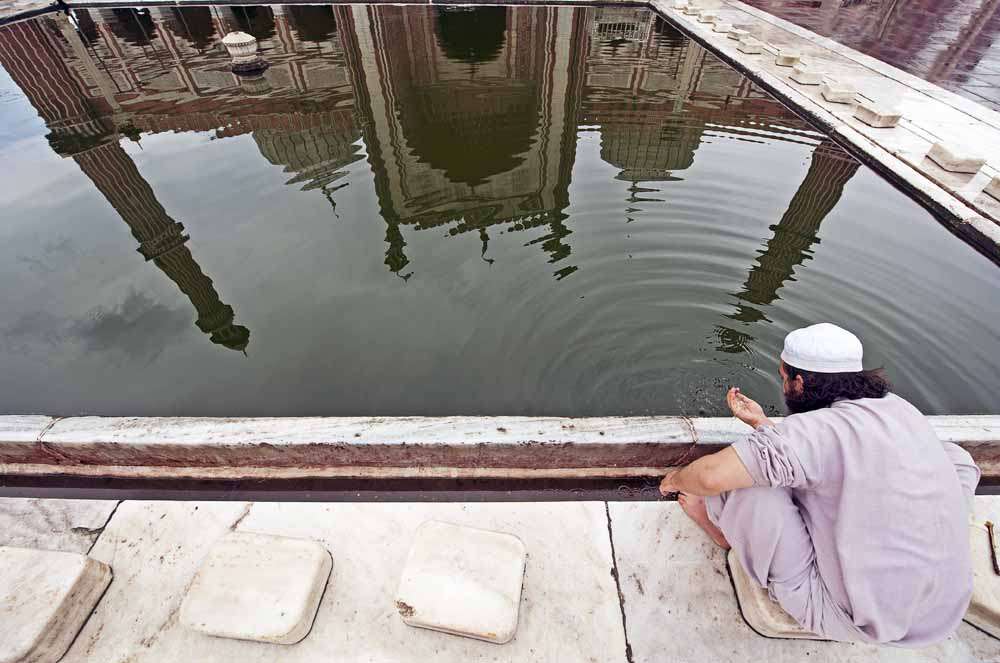 One of the last monuments built by the Mughal emperor Shah Jahan, the Jama (Friday) Masjid was constructed between 1644 and 1656. It’s capable of holding 25,000 worshippers –second only in size to Taj-ul-Masajid in Bhopal . 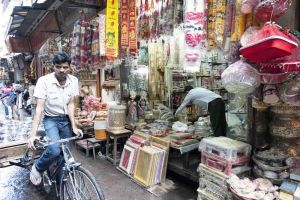 Leave your shoes at the gate (pay a few rupees to get them back when you return), buy a ticket (to include camera and the minarets climb if you wish) and then wander the vast area of the mosque for half an hour or so, to take in the most interesting aspects.

It’s closed on Fridays for worship.

When you come out, negotiate with a rickshaw-wallah and hop on a cycle rickshaw to navigate the cramped and crowded backstreet bazaar of Old Delhi.

You might combine this with your rickshaw ride through the backstreets by asking the rickshaw-wallah to ride down Chandni Chowk, the main busy wide and crumbling market street of Old Delhi, where you’ll weave around parked cars and lorries, meandering bullock carts, hand-drawn barrows and static crates of foodstuffs – before arriving at the gates of the Red Fort.

The massive red sandstone battlements stretch across the full extent of your peripheral vision.

It’s almost more impressive from the outside than from within. Still used by the military, it has restricted access and is nowhere near as fascinating as its namesake in Agra – so save yourself for there and content yourself with the external view that is impressive in itself. 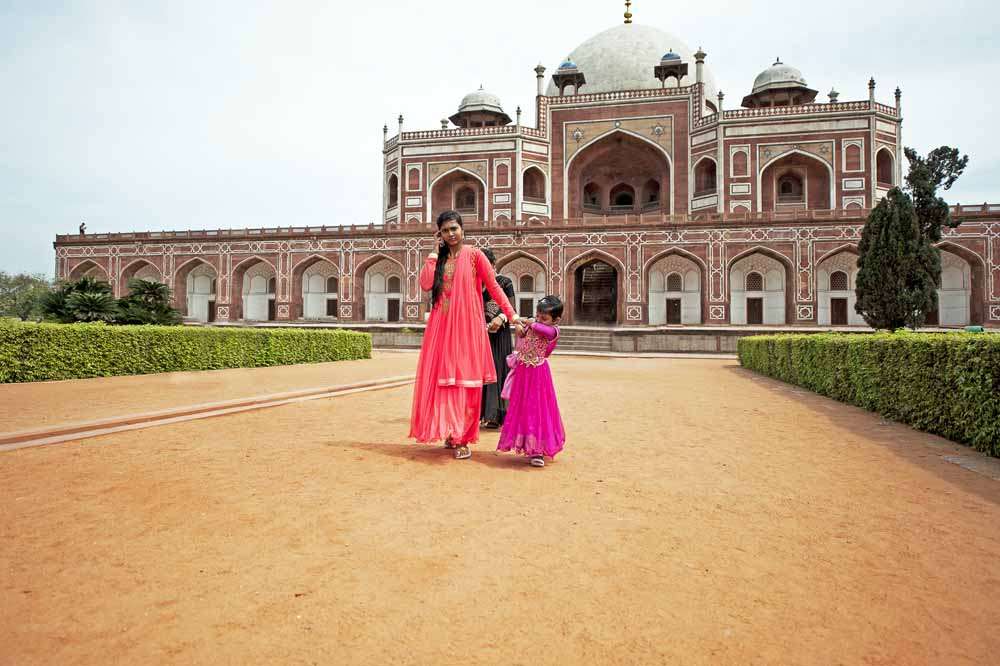 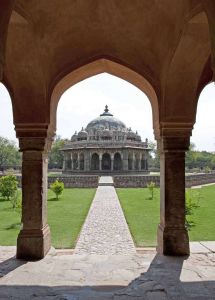 One of the most interesting and picturesque monuments in Delhi, Humayan’s tomb was constructed by his grieving wife in 1565AD.

It’s a tranquil walled place of well laid out Persian-style Charbagh gardens, water channels and shrubs, as well as the mausoleum itself.

It’s worth wandering around the whole of this attractive complex, which houses a number of Murghal family members and relatives of Humayan including Shah Jehan’s son. 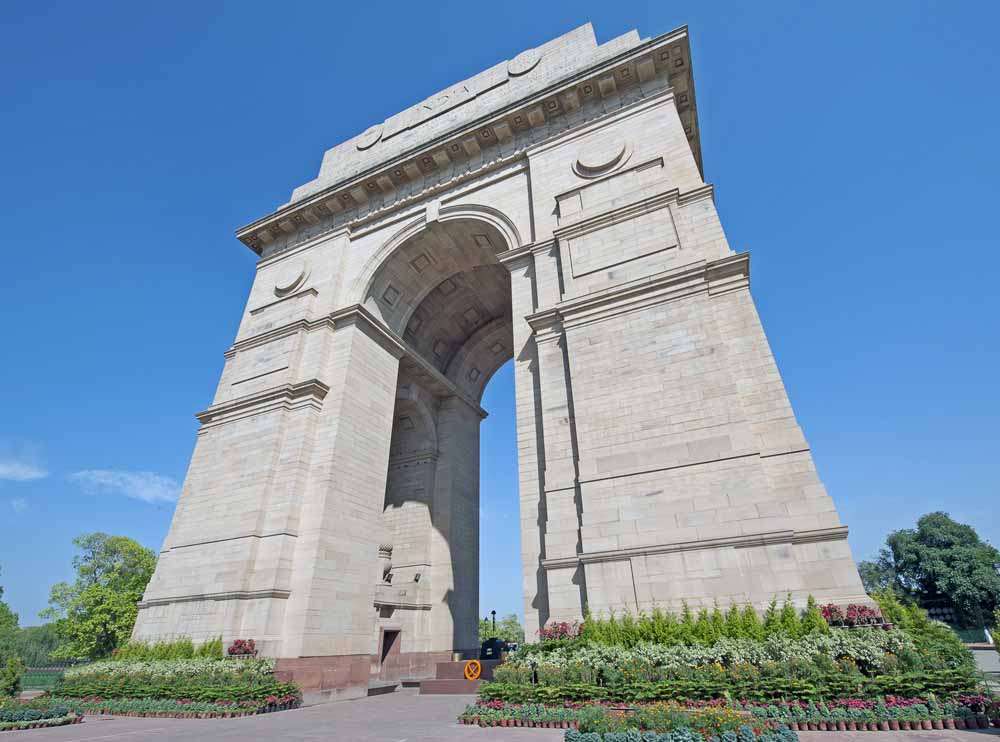 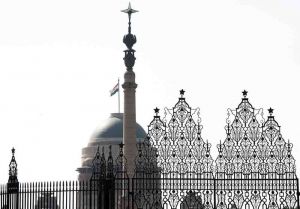 Whether you see this as an enduring symbol of the Imperial ‘Raj’ and Lutyens architecture, or as the seat of Indian Government today, you’ll still be impressed.

Drive from the Triumphal arch (dedicated to Indian fallen of the Great War and other subsequent theatres of war) along the straight ‘Rajpath’ boulevard that leads to the old Viceroy’s House or Modern day President’s, Rashtrapati Bhawan at the western end.

It was constructed as the Governor’s House when the capital of British India moved from Calcutta to Delhi in 1911 thereby creating ‘New Delhi.’ Made from over a billion bricks with 340 rooms and halls covering over 200,000 sq ft within its 320 acre estate, it’s the largest official residence on the planet.

Although the Murghal gardens are open in February and March, we feel that a slow drive-by is sufficient to get an impression of the building’s magnificence. By all means stop near India Gate arch, the ceremonial ‘hub’ of New Delhi to stretch your legs but be prepared to dodge the vendors selling everything from gelabi to garish balloons. 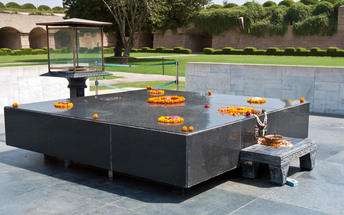 Whilst undoubtedly a revered spot for the millions of devotees of ‘the father of the nation’, Gandhi, other than the eternal flame of his marble memorial pyre – there is little to get excited about in the open, well maintained but otherwise uninspiring gardens of Rajghat.

If you have to miss something on your tour and you’re not devoted to Gandhi, then this is the one to bypass.

You can also visit Gandhi Smriti, Gandhi’s house, to see where he lived and was assassinated – again, if Gandhi and his life is of particular significance or interest to you, then it’s worthwhile.

Drive down and around these roads in a matter of minutes or spend the day walking them.

On a drive you’ll be impressed by this flagship of Lutyen’s imperial architecture; travelling past the government offices and law courts of Janpath and into the impressive Connaught Place designed by Robert Russell – a circus of concentric rings – buildings and roads that form the backbone of commercial, financial and business interests in new Delhi.

You’ll choose to walk if you want to immerse yourself among the textiles, restaurants, chocolate and ice cream emporia, clothes shops, tourist paraphernalia stalls and shoe-shine boys.

Take a detour underground by entering Palika Bazaar that is situated beneath the central park of Connaught Place and in which you can literally lose yourself for an hour or so. 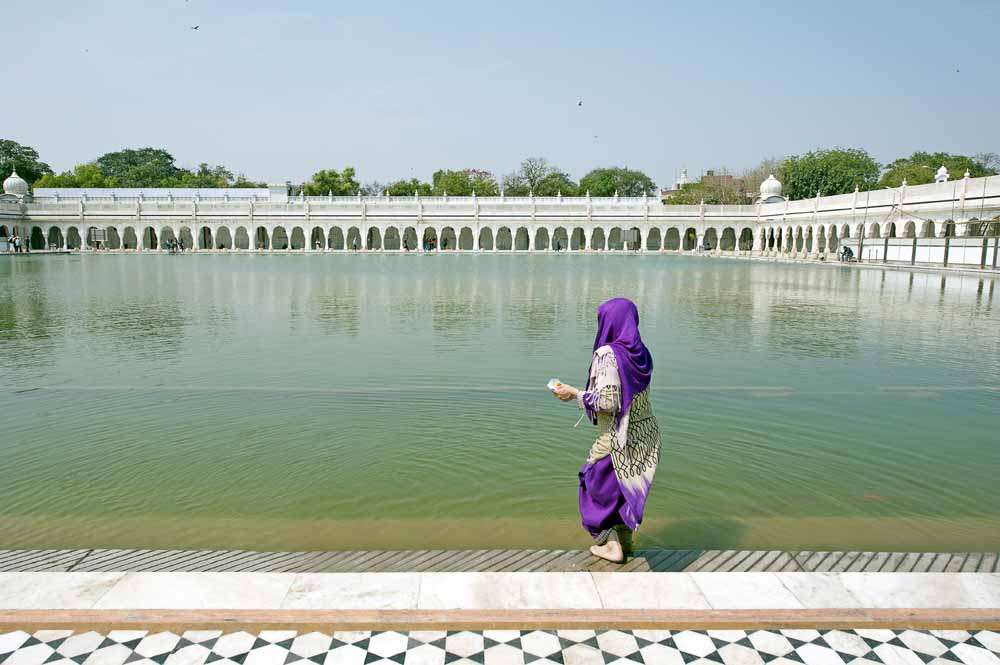 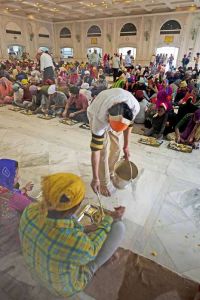 The Sikh temple Gurdwara Bangla Sahib is well known for its large ‘Sarovar’ reflecting pool and extensive grounds within the centre of New Delhi but we found it exceptionally interesting for its community kitchen.

Sikh volunteers from all echelons of life, prepare meals on a daily basis for anyone in need of a square meal. The kitchens are extensive and you can walk around as hundreds of chapattis are rolled and cooked, gallons of dhal are heated and tons of vegetables chopped and prepared.

This hive of industry creates thousands of ‘thali’ meals on a daily basis, fed to hundreds of needy individuals who sit cross-legged in each successive ‘sitting’ on the floor of a large hall .

Well worth the time spent. 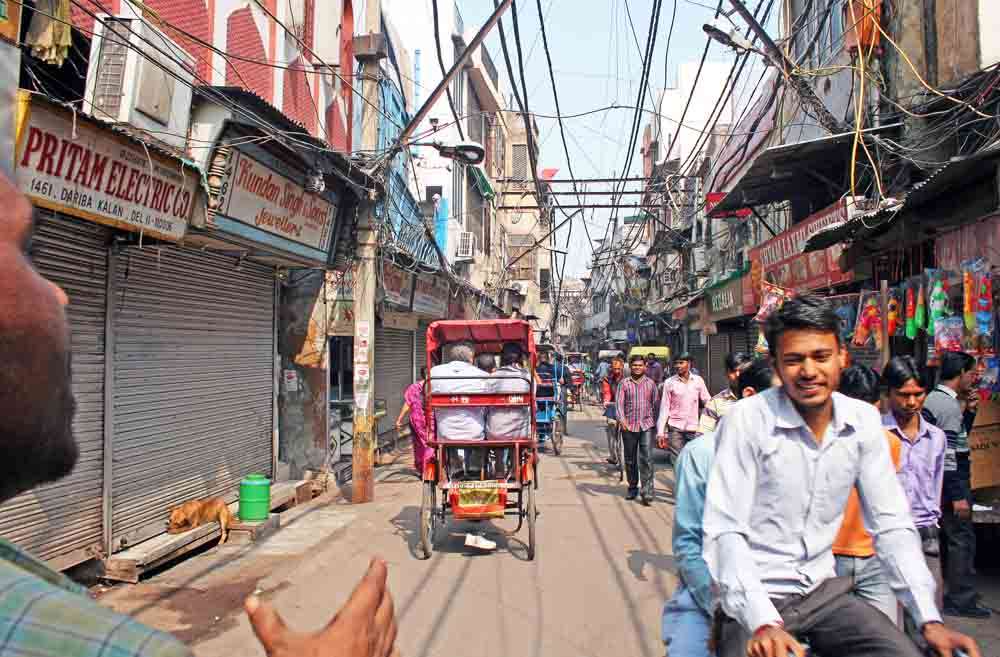 When we first used to live in this part of town you needed a strong constitution for the all-pervasive odour of boiled human urine, cow poo and decaying vegetables, overlaid by heady perfumes and soaps.

Nowadays the cows have gone, the road has been swept more frequently and there are fewer open urinals, which makes the atmosphere more benign and bearable for those of weaker disposition!

That said, this is the main street for textiles – cottons, silks and bolts of cloth – as well as perfumes, copper and brass that seem to attract a huge contingent of Russian shoppers.

This crowded and narrow mile encapsulates all of the madness of India; with precariously built ‘hotels’ stacked upon and alongside each other – where the backpackers of the world congregate – leaning onto the backs of the shops, which themselves have ‘rooms for rent’ piled upon one another to fill every available space.

Paharganj is a pedestrian road for most of its length, so you’ll definitely immerse yourself in the true character of India if you venture in.

You won’t regret it, as long as you hold onto your money and keep your wits about you for the rickshaws and motor scooters that weave at speed between dawdling shoppers. 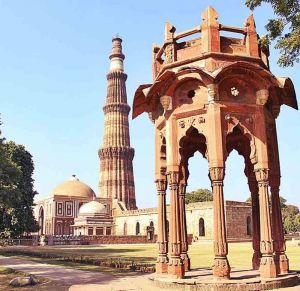 Qutab Minar is a good example of early Indo–Islamic architecture and the tallest brick minaret in the world.

Built at the beginning of Murghal rule in 1206, the reason for its construction remains a mystery. The tower has five distinct stories, covered with intricate carvings and verses from the Quran.

Worthy of a drive-by, you probably won’t want to stop here for any significant length of time unless you want to stretch your legs for a while. 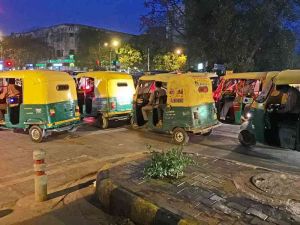 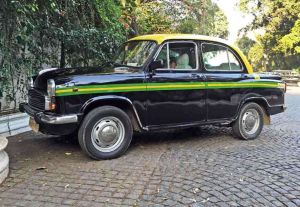 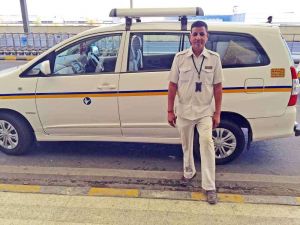 If you go it alone you’ll probably use either autorickshaws (tuk-tuks) or local taxis. Alternatively let us arrange your tour throughout India and use your own chauffeur driven private vehicle for any sightseeing you do.

Let us plan your adventurous journey to India