Unless you’re familiar with Vancouver you might not realise that Vancouver Island and its state capital Victoria is a genteel and eclectic partner to the more frenetic and modern city of Vancouver across the Strait of Georgia.

The ferry ride across the Strait, that threads its way between the verdant islands of Saturna, South Pender, Waldron and Sidney, to name a few, serves to detach you from big-city mentality and gently introduce you to the more reserved and colonial ambiance of Vancouver Island and its capital, Victoria. 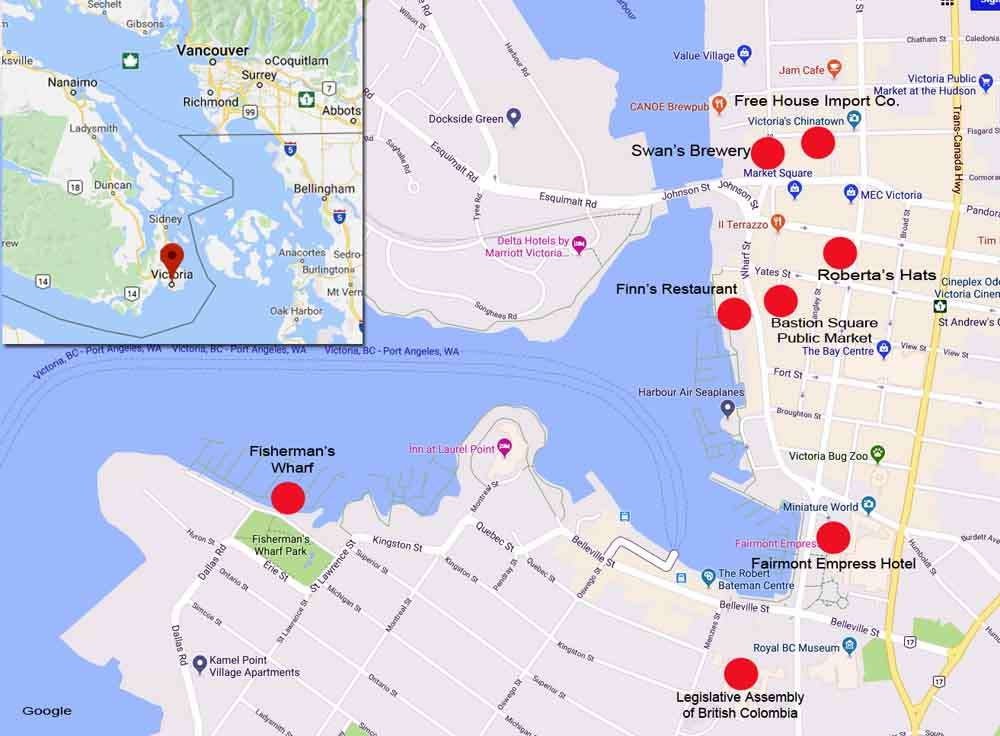 The most immediate visible difference between the two halves of Vancouver is the architecture, with Victoria displaying much of the regency heritage of the island that became a crown colony in 1849 and now presents its grand and imposing façade to the visitor. 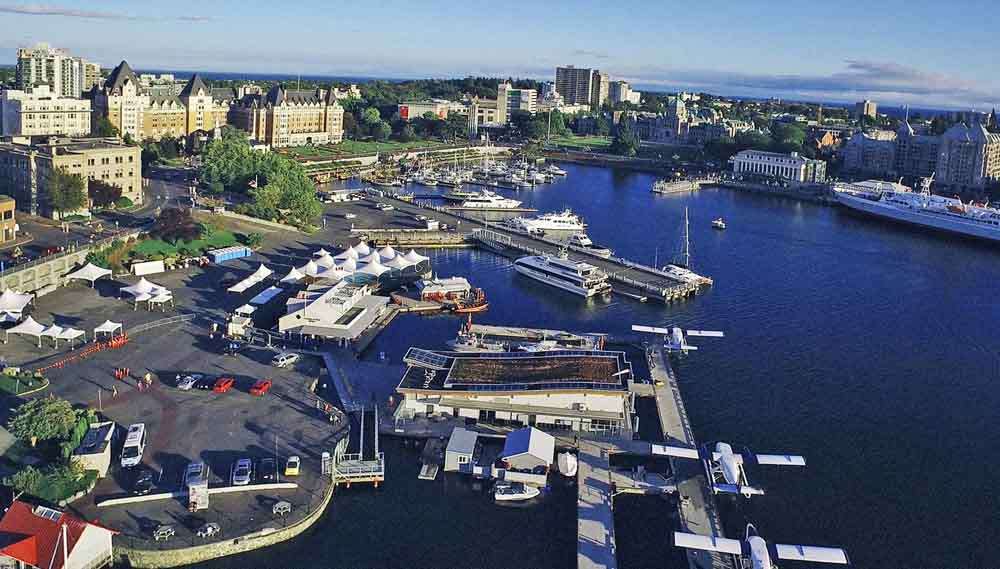 As one would expect with an historic centre, Victoria offers several interesting corners that add character and interest to a day out, epitomised by the small selection of diversions we offer you here. This small collection of distractions will provide you with an interesting walk around the city, an insight into the heritage of the area and a great way to chill after a day’s bargain hunting.

Take our short tour and soak up the atmosphere. 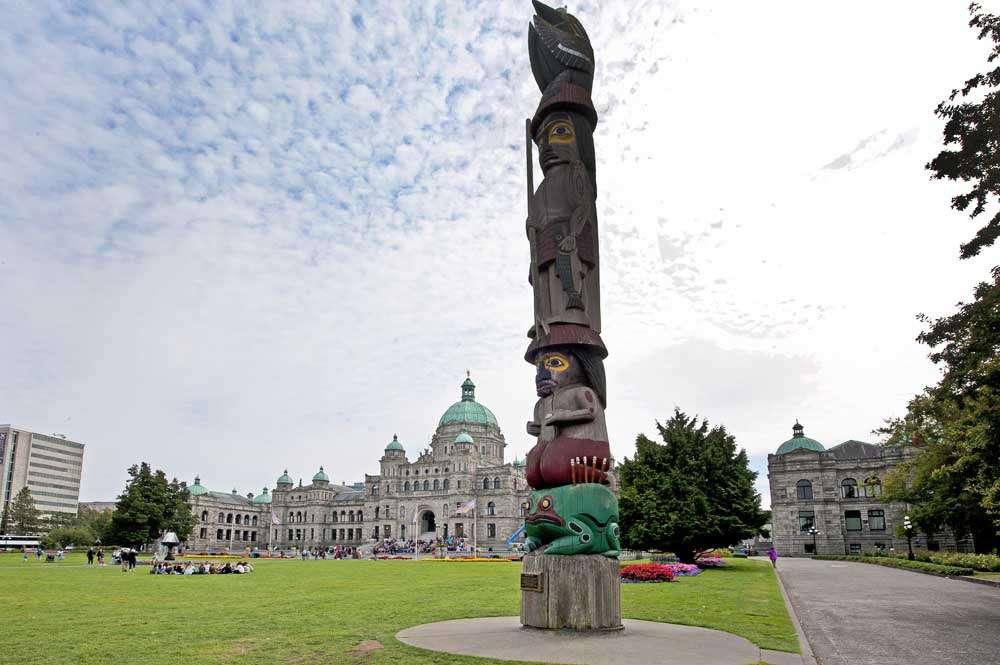 Although we’ve parked our car near colourful Fisherman’s Wharf (subject of an earlier review – see Cherrie’s notes below), it’s not until we walk into the main waterfront park that we understand why Victoria is seen as the old heart of Vancouver. 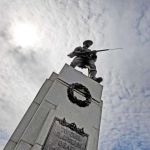 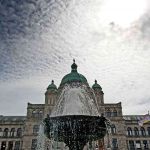 The massive, imposing structure of the Legislative Assembly building epitomizes the historical colonial control of Vancouver and represents all that is regal, both architecturally and administratively.

The building very much sets the scene for the historical heritage of Victoria but as with so many colonial centres, it’s only the hub of an eclectic collection of developments surrounding it that give the city its true character. 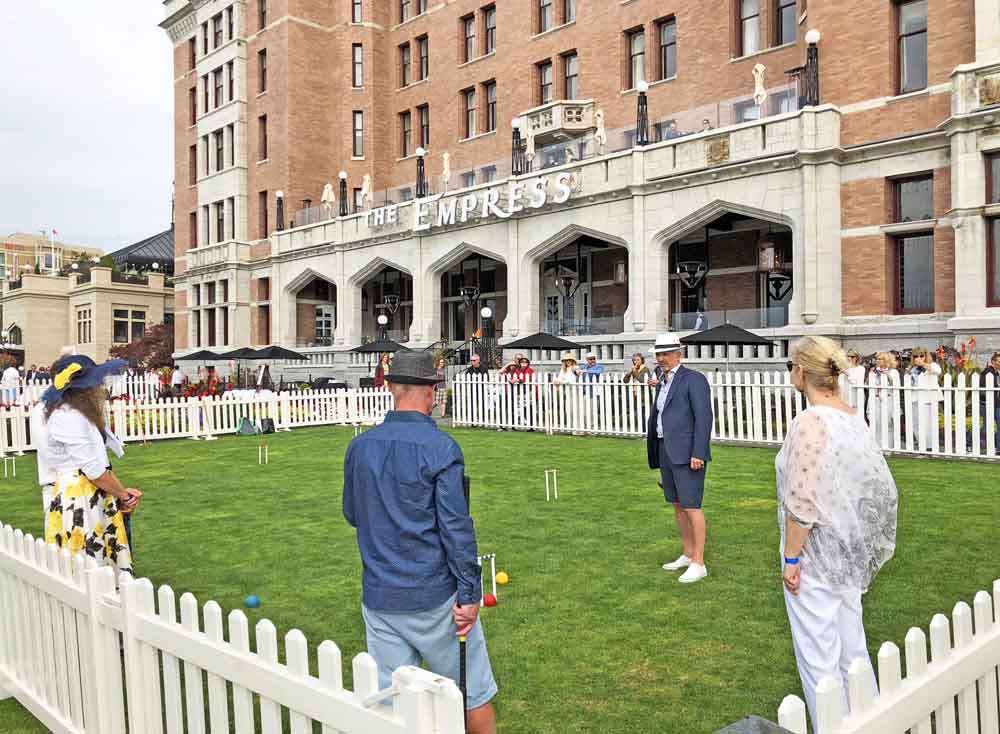 As if to underline the decadence of its colonial past, we wander into the grounds of the Empress Hotel where various party-goers in smart period dress enjoy cream tea and croquet on the manicured lawn in front of this grand old dame. 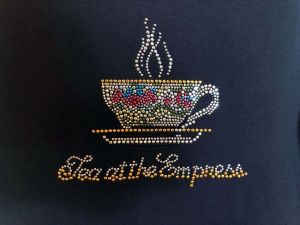 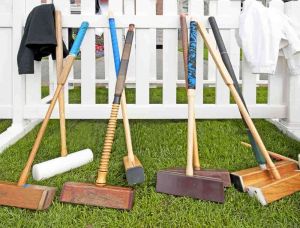 We delay a while to watch the fun before strolling into the hotel in order to enjoy its newly refurbished hallways; soaking up the ambiance of days past within its vaulted ceilings, paneled walls and sweeping staircases.

We decide against our own high tea within the beautiful salon as the $75 per person price tag seems unnecessarily stiff for tea and buns, so we decide to save ourselves for dinner. 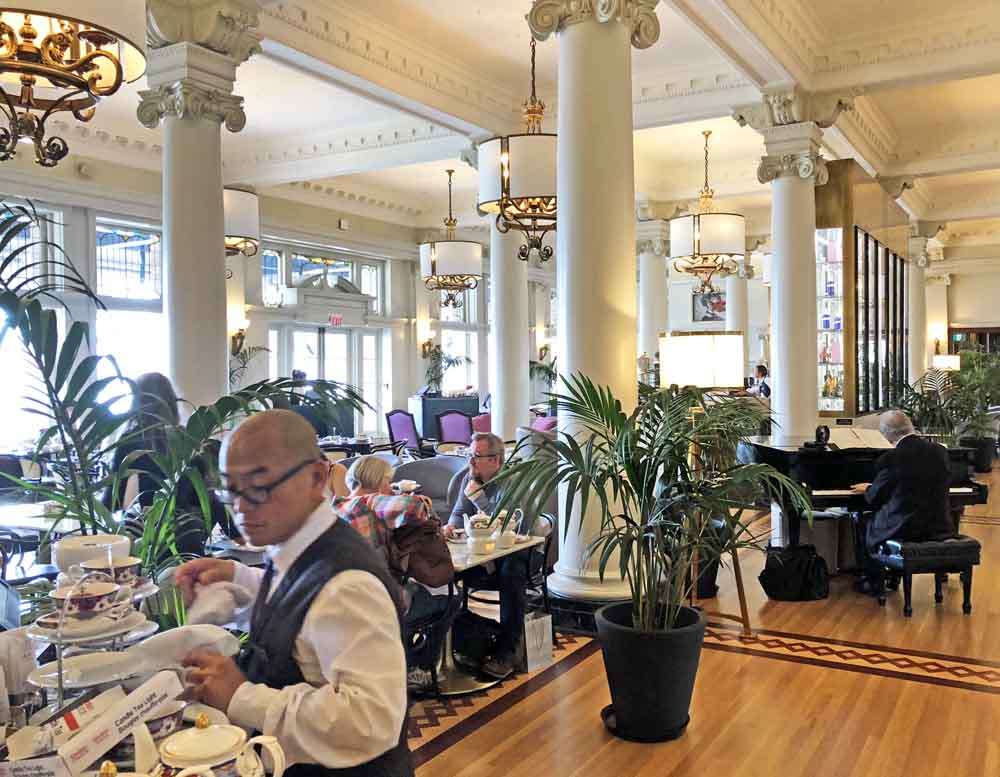 No doubt the legendary ‘Tea at the Empress’ is what you choose to make of it – the enjoyment of many of life’s experiences being as much in the mind as in the manifestation – and mixed reviews of this experience urge us to opt for the visual treat, rather than the culinary one. 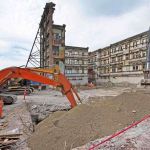 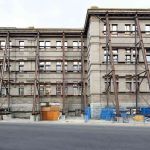 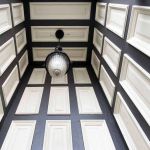 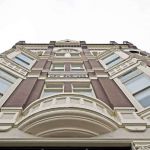 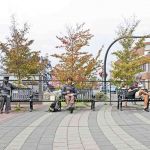 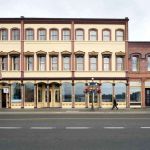 We now cross the busy street and head along Wharf Road, past a building site with a propped and precarious façade of an old regency style building, completely gutted behind and awaiting a new body to restore its dignity. 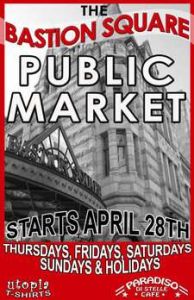 The busy waterfront of departing seaplanes, boats and people provides an interesting backdrop as we approach Bastion Square Public Market.
Before crossing Wharf Road to the market place we delay a second to read the menu at Finn’s restaurant and suitably intrigued book a table for this evening.
Crossing the road to the market we’re immediately struck by the tremendous variety of more unusual crafts and artistic wares for sale mixed with the more traditional fayre of clothing, coffee and collectibles.
This is probably one of the most creative collections we’ve come across in a single market, the artistic offerings changing regularly as the stalls come and go during the month; with many of the unique selection of wood workers, potters, jewelers, leather workers, artists and fashion designers actually on site.
The large open square gives way to a narrower road that stretches for nearly two hundred metres with restaurants and stalls; taking us far longer to navigate than we would normally, simply because of its appeal.
The market leads us to Government Street where we take a left in the old downtown quarter towards Chinatown 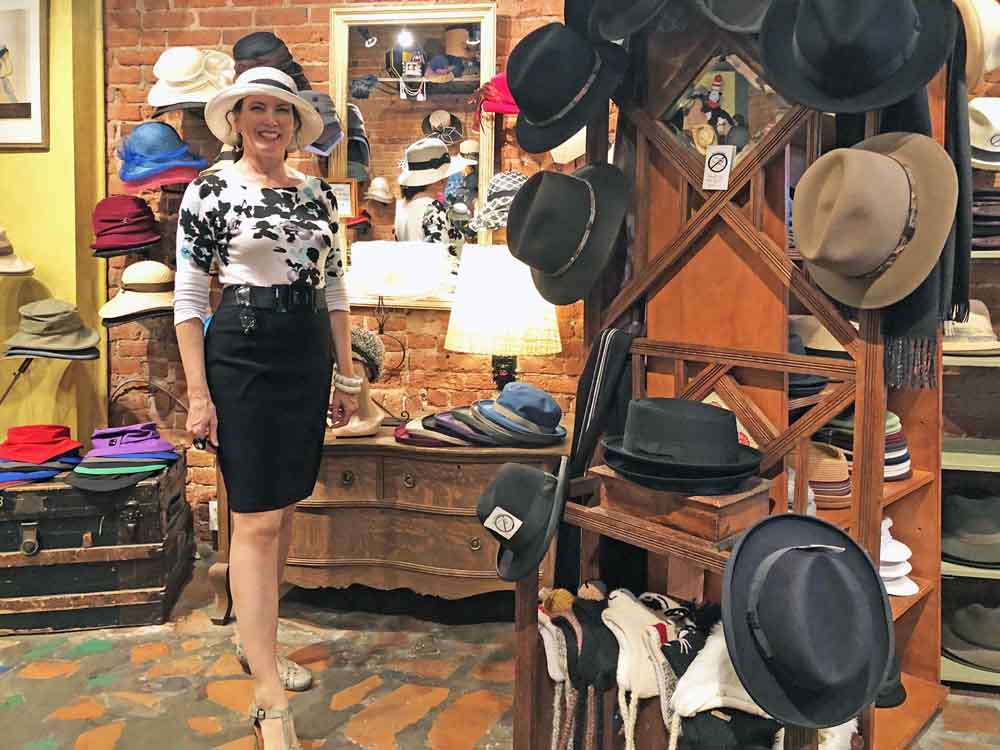 Neither of us are great ‘shoppers’, usually buying goods on ‘need’ rather than ‘whim’. Roberta’s is one of those places where one discovers a need that you didn’t know you had.

We’re not naturally given to wearing hats for the sake of it either but we defy you to enter Roberta’s Hats and not be smitten by the mesmerising display of headwear that will have you giving in and trying several hats in front of the mirrors around this compact little shop of wonders.

There’s something for everyone here and it’s a real pleasure to spend some time in your own private fantasy before choosing a hat that you’ll go out of your way to find an excuse to wear as soon as you get home.
Roberta’s brings fun and fashion to even the most jaded shopper’s heart in Victoria. 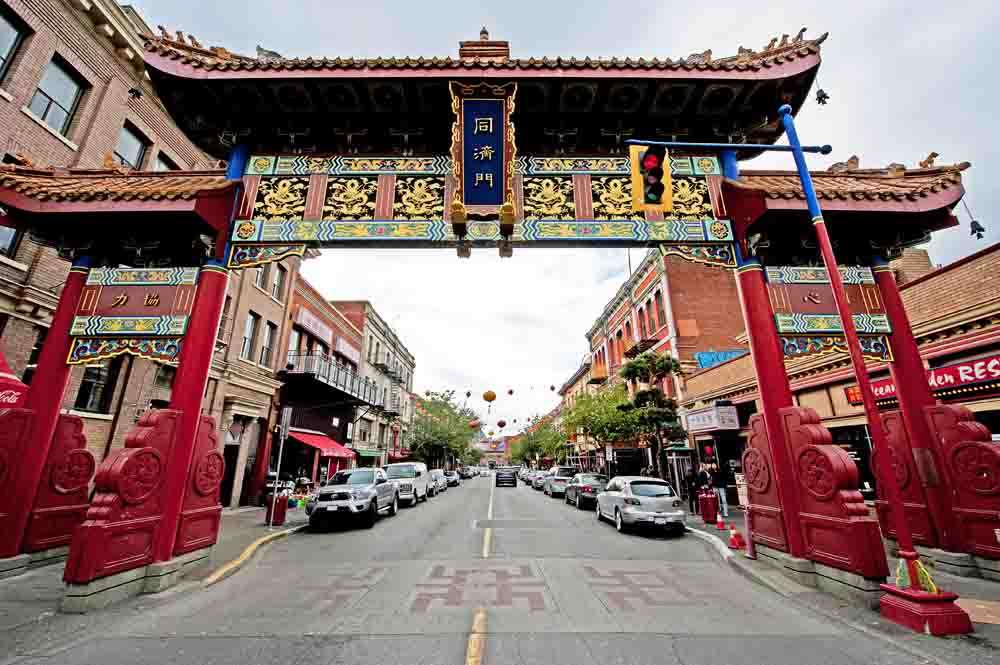 Although socially significant in being the oldest Chinese community and gateway to immigration in Canada; as many Chinatowns go, the one in Victoria is a visual disappointment . 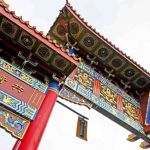 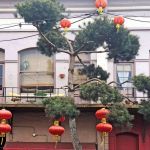 Entering through the ornate ‘Gate of Harmonious Interest’ one is tempted to believe that it’s the sole remaining landmark of this community.

The roadways themselves are architecturally bland with the occasional lantern adorning trees above the pavements. 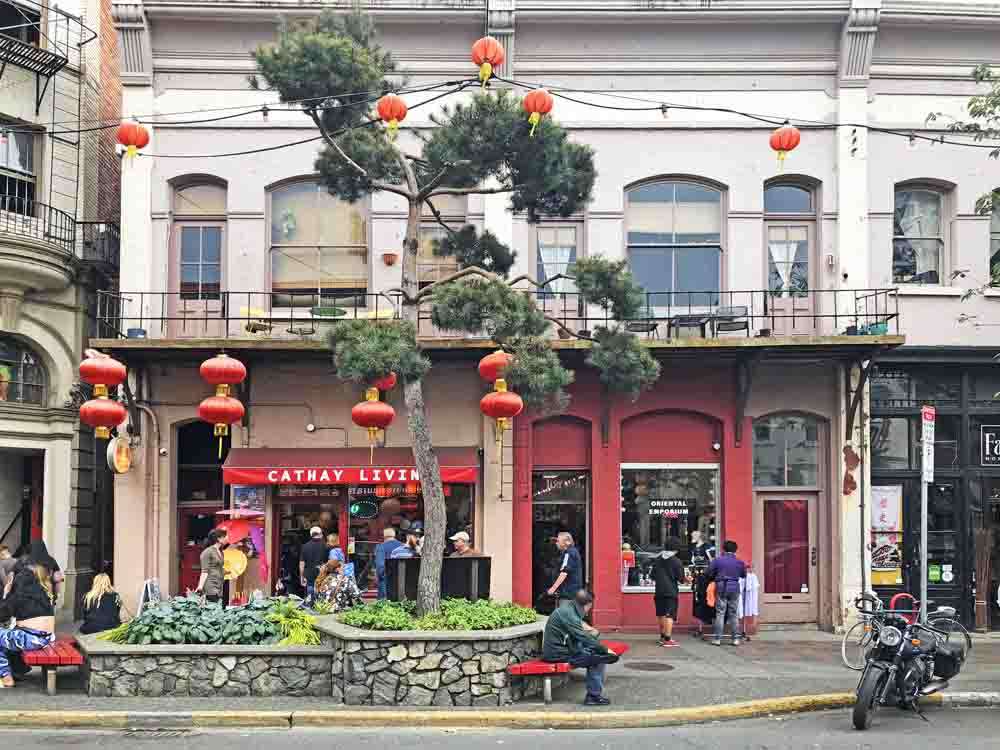 It’s not until you explore a little deeper, however, that some of the magical character reveals itself, from the busy ‘Bubble Tea Bar’ to the Free House Import Co., which transports you in one step into the kaleidoscopic colour of the orient. 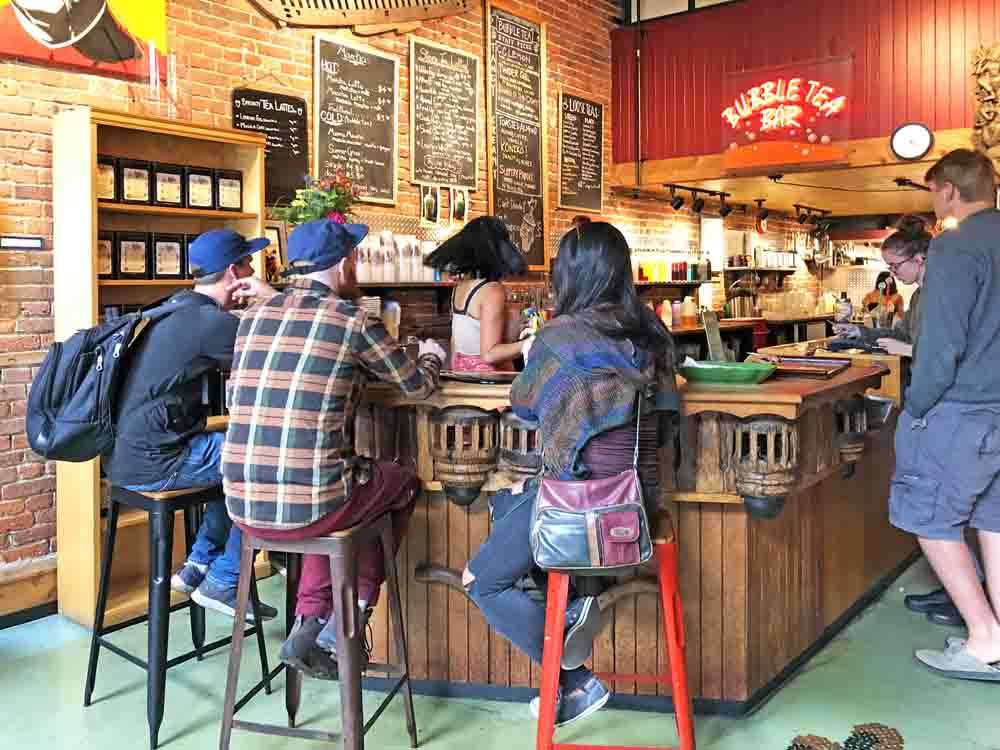 At the Free House Import Co. you’ll find every conceivable Chinese artefact – from paper and calligraphy brushes, to ‘chinaware’ and decorative dragons.

This isn’t a tourist trap but a warehouse for the Chinese community who wish to retain their identity and equip their homes with authentic goods. 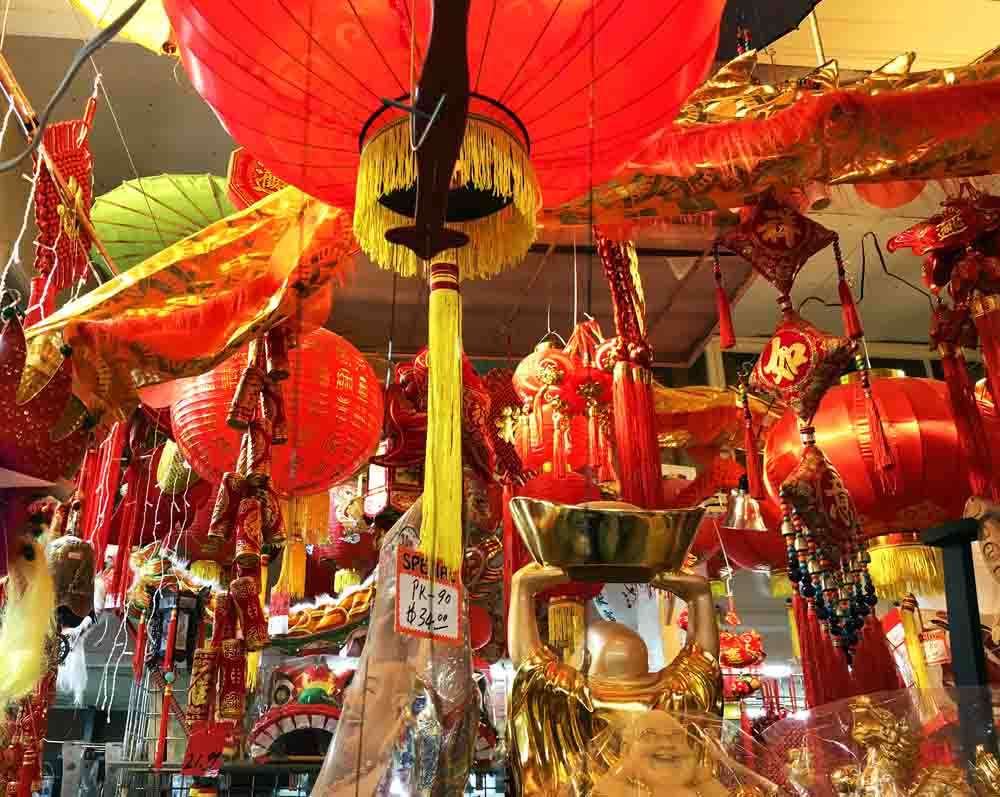 Outwardly, at first glance a celebration of kitsch, it’s nevertheless a brilliant insight into Chinese culture and practices. 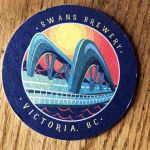 It’s too early for dinner, so we stop briefly for a drink at Swan’s Brewery.

It’s a refurbished saloon that we find as we return to Wharf Road that has been turned into a gastro-pub and hotel with self-contained suites in a heritage building with a plethora of wood, friendly waitresses and variety of ales. 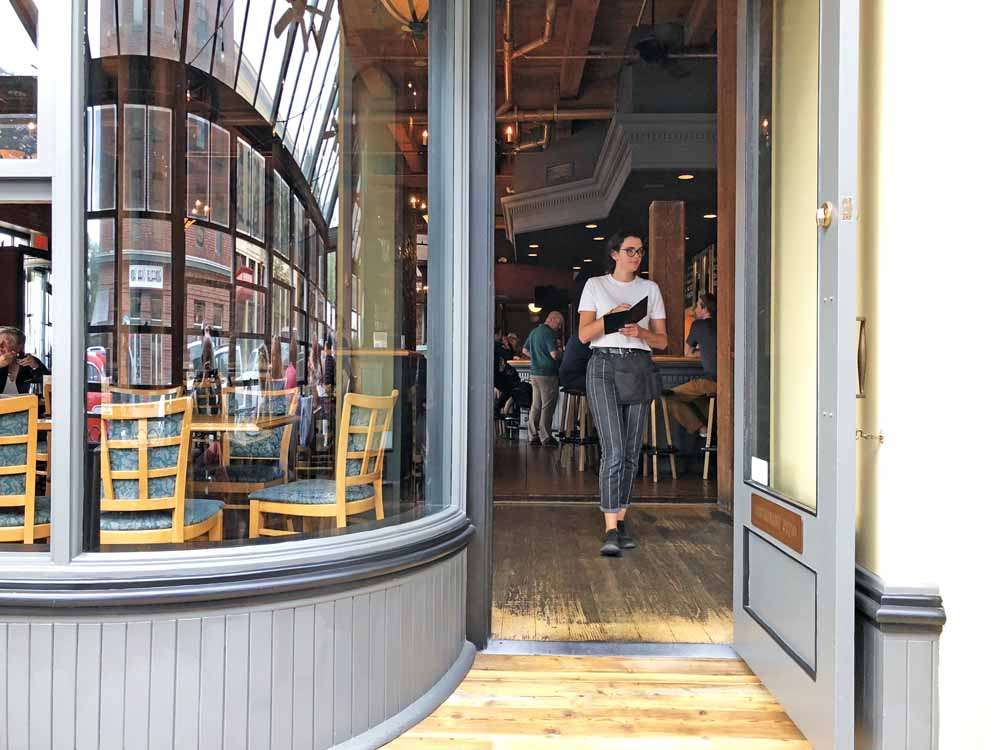 It’s large, light and airy, reflects the traditional ambiance of western waterfront style pubs the world over, with the exception of its ‘First Nation’ artworks and provides a welcome rest from our walk around downtown Victoria.

Victoria is blessed with a huge variety of character restaurants but the juxtaposition of Finn’s on the route of our walking tour persuades us to dine there in the evening, having read their menu earlier.

The imposing red brick and stone chandlery building that is now Finn’s was built in 1882 by Scottish born Roderick Finlayson, one of the founding fathers of Victoria and after whom the restaurant is named.

His memory is well served by the extensive and pleasing presentation of both the restaurant’s interior and menu.
We’re lucky to have booked earlier as there’s a large queue awaiting the off-chance of a table, as we arrive and as requested, are seated in a window overlooking the harbour but within the main building, rather than the conservatory. 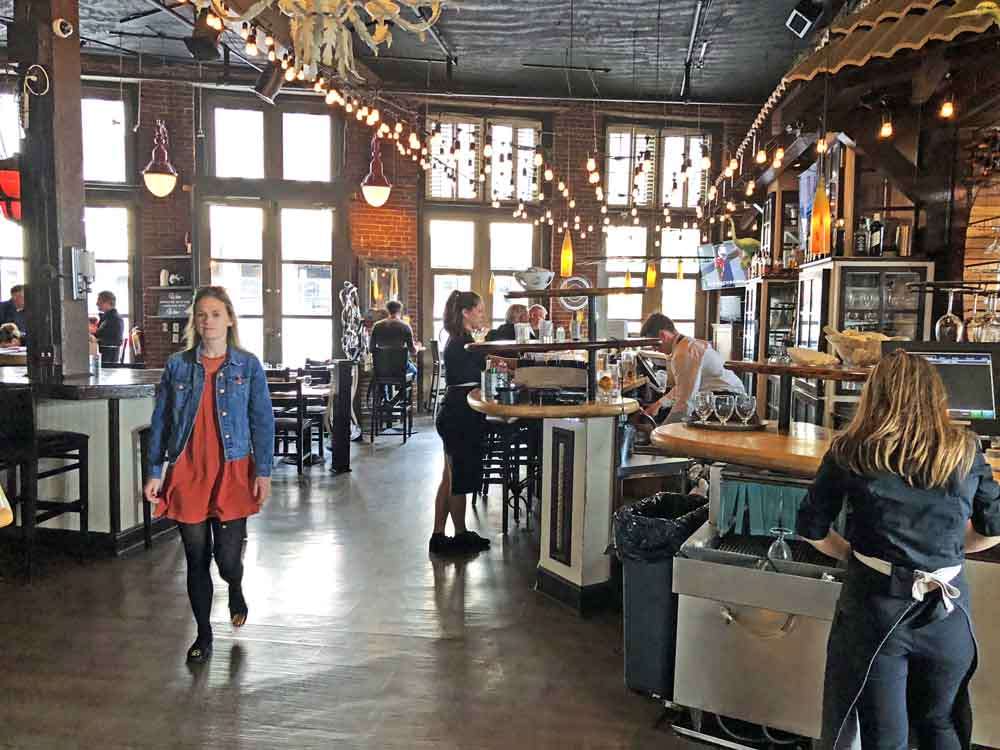 Having chosen our starters of Buttermilk fried baby calamari and oysters, we ask our waitress ‘Lindsay’ for a recommendation for mains. She steers us away from the steaks, “that you can get anywhere, however good they are here”, in favour of Finn’s Double-thick pork chop, a 14oz feast that’s hand cut in house and accompanied by ‘Yukon Gold’ whipped potatoes and seasonal vegetables. It turns out to be an enormous piece of succulent meat that just melts in our mouths.

Lindsay proves to be a gem as a waitress and is much a part of our enjoyment of the meal as the food itself – why can’t more restaurants look after their staff to encourage such congenial hospitality?

As we wander back to our car, we’re replete with the after effects of a superb meal and a thoroughly enjoyable day strolling around this city – exploring some of the lesser-known attractions that are unlikely to find themselves on the Tourist Board website.

If you’d like to see our earlier review about the colourful cabins of Fisherman’s Wharf then simply click here.

You can see more information about each of the places we feature above by clicking on the relevant website link of each location below:

Fairmont Empress – Tea at The Empress