Tripping around the Troodos

Home » Cyprus » Tripping around the Troodos

The Troodos mountains in Cyprus offer an easily accessed trip back in time from practically anywhere on the island.

With Cyprus a British forces base for many years and a cheap holiday destination for most of Europe, there’s been a predominance of coastal development that lends itself more to resort holidays than cultural escapes.

That said, it doesn’t take us a great deal of effort to hire a car and head for the hills. 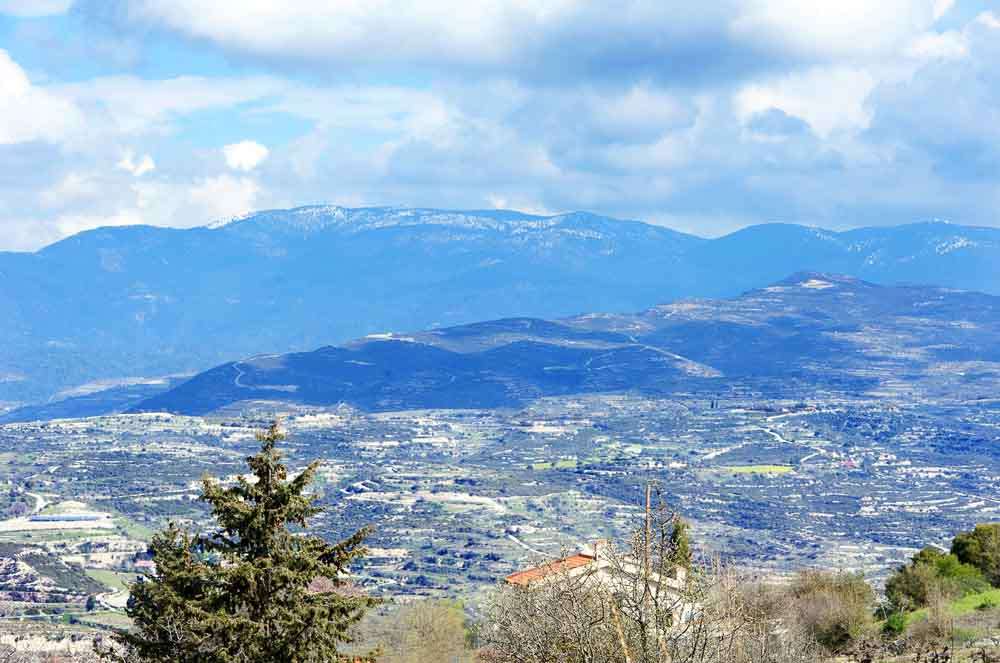 In a surprisingly short time, we’re out of Paphos and into semi-arid landscape that reflects ‘parched Mediterranean’ with its rolling hills of scrub and bare soils – not the most appealing of vistas but infinitely more attractive than the high-rise concrete of the city.

Our mission is to drive into the Troodos mountains and to visit one or two of the more remote traditional villages in order to get more of a flavour of the country’s character. 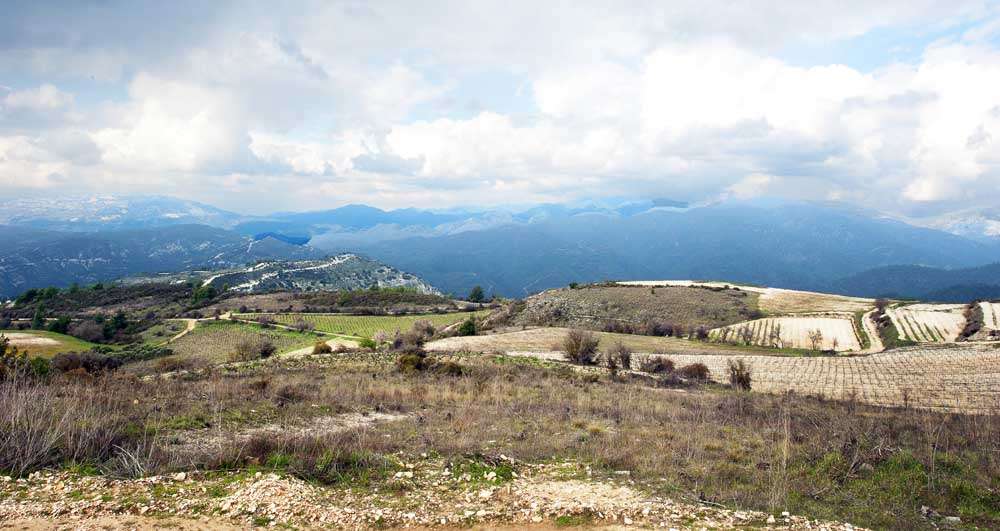 The Troodos Mountains in the south and southwest are made up of igneous, or volcanic rock, formed of molten rock from beneath the ocean that once separated the continents of Eurasia and Afro-Arabia. The range stretches eastward about 50 miles (80 km) from near the island’s west coast. Mount Olympus (also called Mount Troodos), the range’s summit and the island’s highest point, reaches 6,401 feet (1,951 metres). 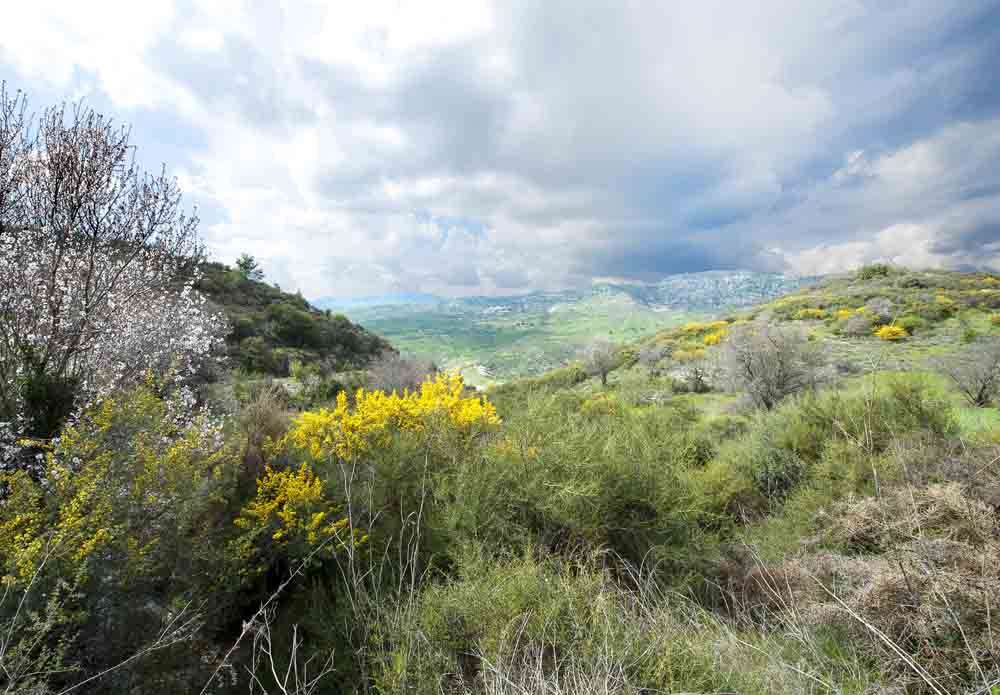 We’re travelling off-season, so the skies are troubled but the roads are clear as we meander up through an ever-changing landscape that is increasingly splashed with the colour of wild flowers, flowering shrubs and tree blossoms that transform the view in among the pine, dwarf oak, cypress, and cedar forest coverings. 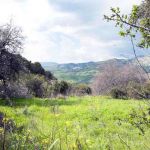 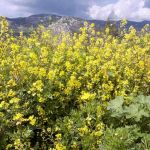 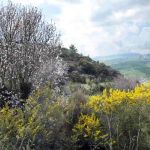 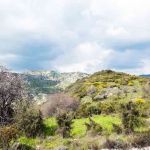 Around the small rural communities in the mountains, large areas were historically converted into agricultural terraces but with a substantial decline in population over many years, this has resulted in the mountain terraces lying uncultivated. Terrace walls have not been maintained, which sometimes causes a domino effect of collapsing terraces and a gradual reversion to a more natural landscape, which unfortunately has lost much of its topsoil. 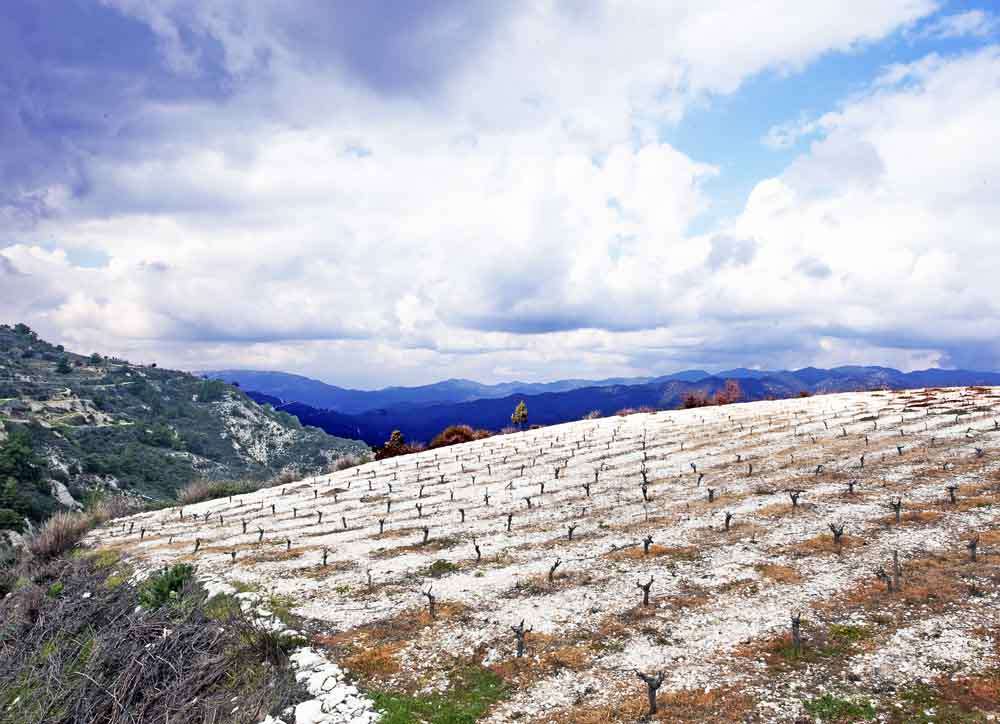 That said, there are numerous examples where there is a rejuvenation of cultivation, not least of which is with the wine industry and many fields in the hills are laid to vine.

We drive past hill-top Pachna, whose chalky soil, elevation and climate have made it ideal for vineyards. By 1985 it had become the largest grape producing village on the island, cultivated with vines for table wines. 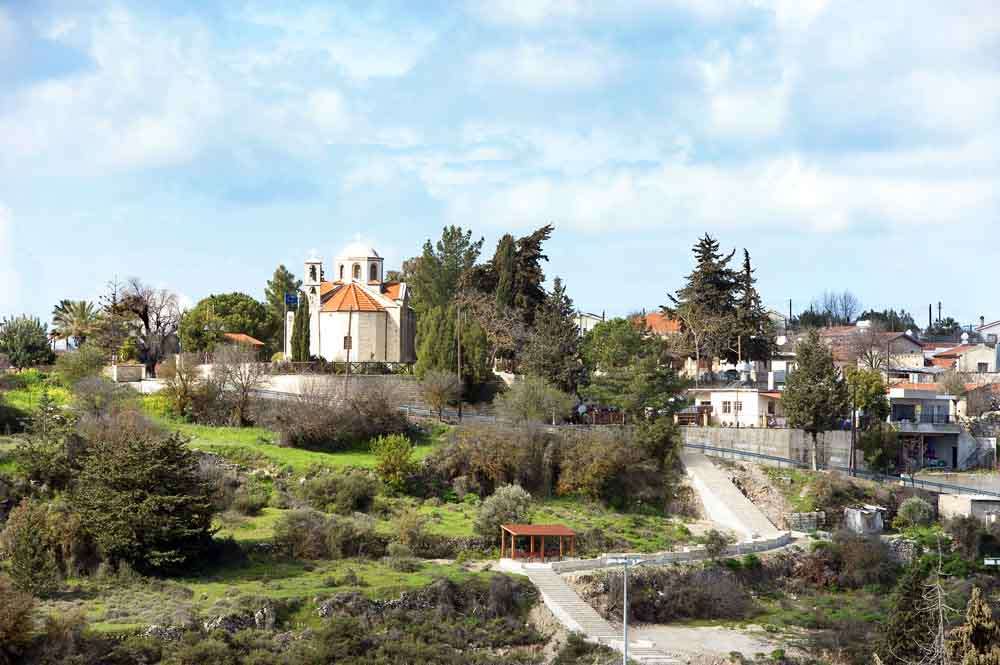 Onwards and upwards through dramatic twists and turns and wooded slopes eventually brings us to the old village of Omodos. 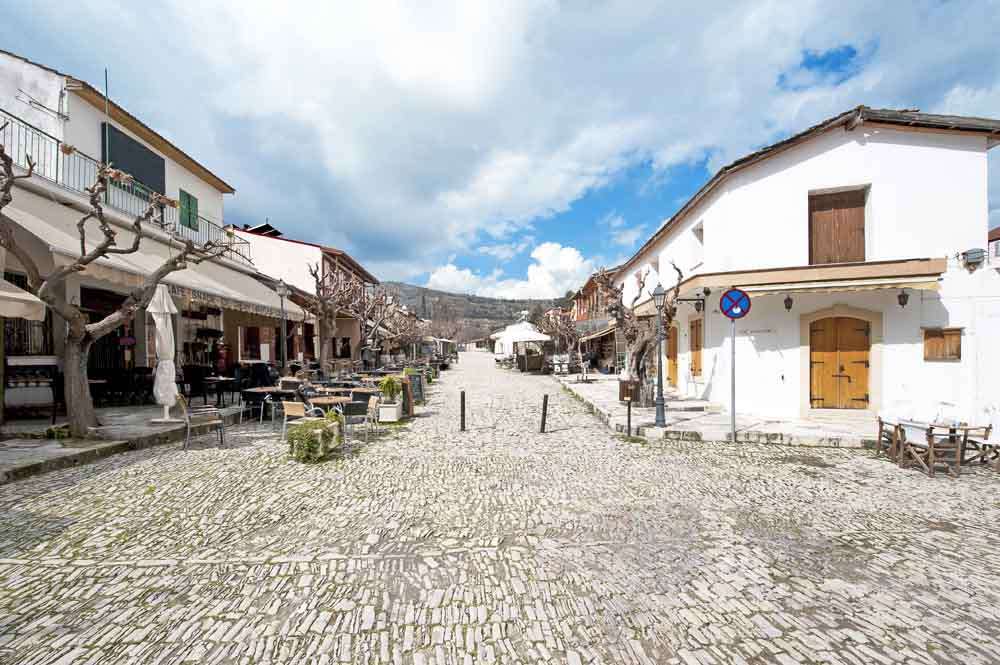 Whilst it hasn’t escaped the attentions of tourism, it still retains much of its original character. Narrow lanes with close huddled houses cluster around the main cobbled street of cafes, little restaurants and traditional tavernas, with their al fresco chairs and tables seemingly scattered at random down the gentle hill to the town square.

Omodos itself produces a good deal of wine and holds a wine festival every August. You can also enjoy free samples of local wine at many of the restaurants and in a few of the modern bars housed in traditional buildings. 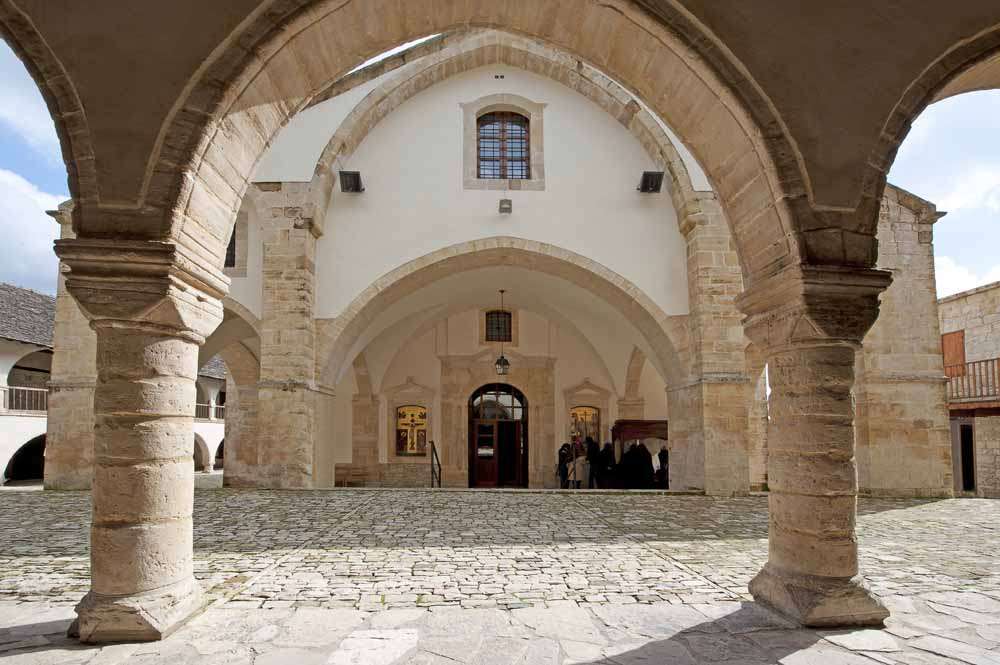 The main street terminates at a junction where a set of steps down lead through an arch to a Basilica, the 17th-century stone-built Monastery of Stavros, which exhibits a charming courtyard of arches and cloisters that surround the main church. 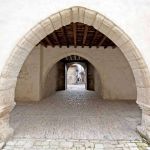 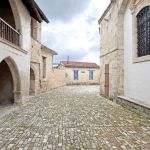 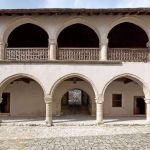 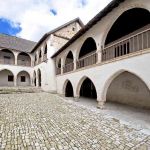 Passing through this peaceful area and out into the older town, the alleys become narrower and the houses less groomed, so it’s possible to see more of the true character of the village, where discarded wine amphora and crumbling brickwork hint at its history. 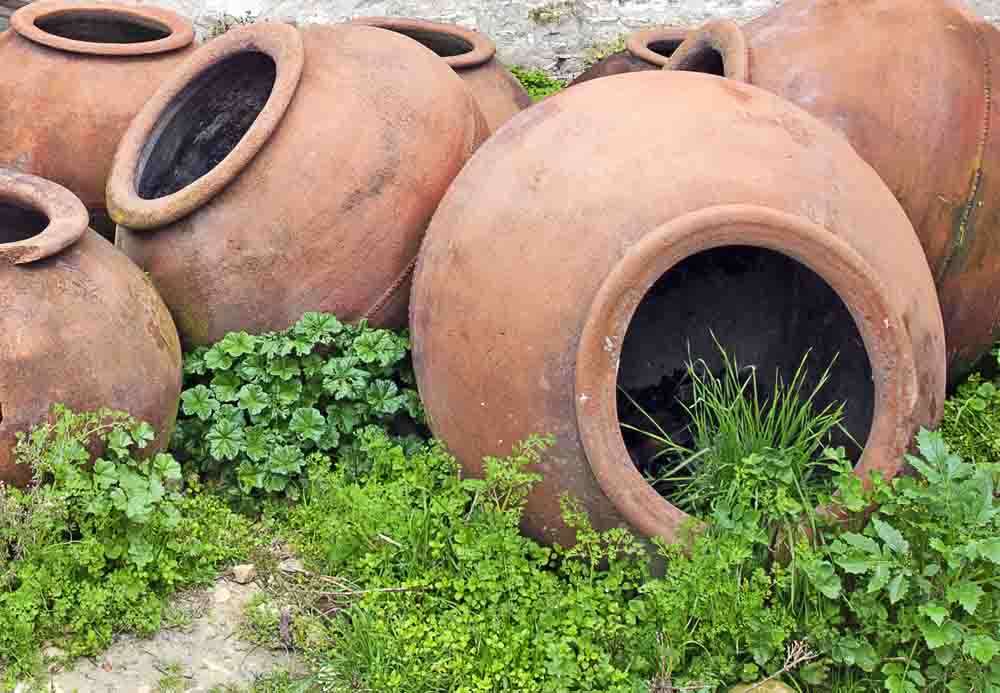 On our return, we pause long enough for coffee in the main square before buying copious quantities of pastries and patisseries in a backstreet store that seems to bake them fresh continuously. 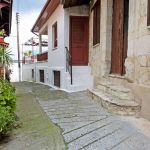 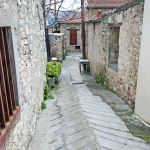 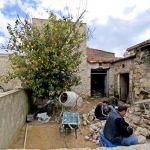 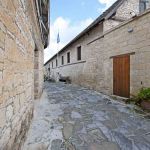 Our lunch is spent amidst the vines of a hilltop vineyard with views of colourful blossom filled slopes under brief glimpses of warming sunshine that encourages us to consider a return to Cyprus. 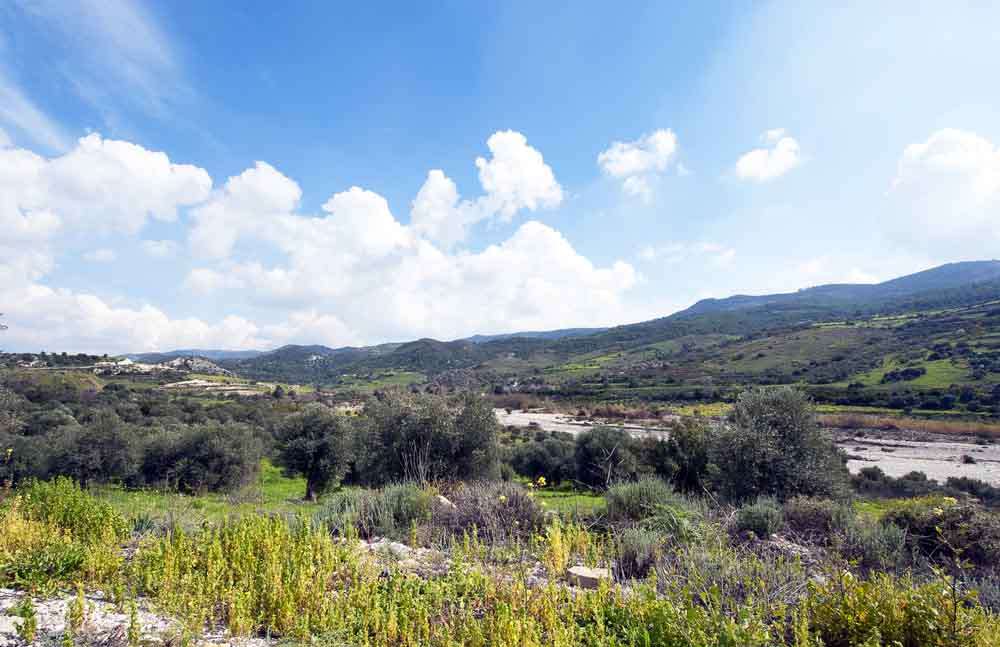 A longer stay will enable us to explore further into more of the natural landscape – perhaps to explore for signs of the copper (for which ‘Cyprus’ is the Greek term) –  known since antiquity for its mines that for centuries supplied copper to the entire Mediterranean.

Not forgetting,  that Cyprus remains a divided country with some tensions but that both the Greek and Turkish parts of this unusual island bear further investigation – although remember that you won’t be able to take your hire car between the two ‘countries’.

Specific ‘official’ information about Omodos can be found here.

More information about wine growing in and around Omodos can be found here.